How to Make Quality Music Videos for Free in 6 Steps 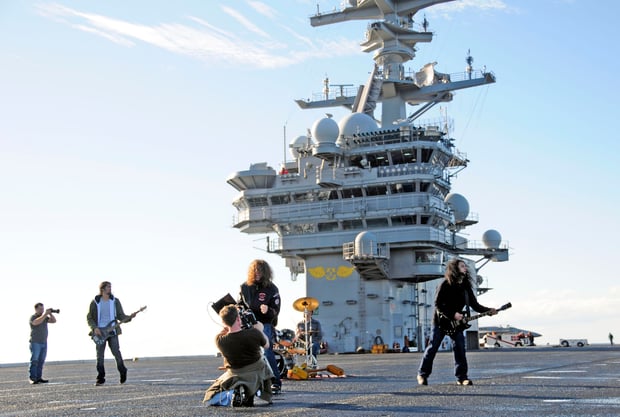 In the end, everything comes down to videos. There’s no more immersive medium for consumers of art, and no better way to get your artistic message across. In a video, potential fans are exposed to your music, your general aesthetic vision, and you. After watching one of your music videos, a viewer knows who you are, what you sound like, what you look like, what you’re all about. The trouble is, you may not have an expert cinematographer in the band, or the budget to hire a film crew, from key grips to the Best Boy.

Fortunately, when making a music video, it serves you best in almost every respect to make your first one for free. It will give you no choice but to maximize your creativity, allocate your resources wisely, and learn a new type of composition. Then, when you get signed to Superstar Records later and have an enormous budget for your next video, you won’t waste it. Here are six steps for making a music video, from concept to completion.

1. Watch videos you like and figure out why they’re good

Take a scrutinizing look at a few videos you enjoy. Then find a few you don’t care for. What makes the good ones good? What tropes pop up over and over? If you’re making a hip-hop video, should you really get all your female friends to wear bikinis while you crouch in front of a rented Lamborghini, or is that format so played out that it’s not worth pursuing? Do you like videos that tell a story?

Then, get technical. Do your favorite videos feature long, lingering shots, or does the shot change about every measure? Is the cinematographer shooting in black and white, or using a filter, such as sepia tone? Does the video cut back and forth between two or more scenes? Many videos are basically short films interspersed with footage of the band performing, and this format is tried and true when it comes to connecting with an audience.

2. Use equipment you already have, starting with your phone

If you have a decent HD video camera, great. It helps a lot to have something that mounts on a tripod and has lots of memory. If you don’t, that’s fine, too; there's no need to spend money on fancy equipment. Focus on what's free and available to you. Just about any smartphone is capable of creating good video (here's an article about using an iPhone to do it).

If you’re not crazy about what you’re getting, try downloading one or more of the various free video apps available for iPhone or Android. These apps can change your aspect ratio, so you can shoot in landscape mode with your camera upright. They also add filters and effects and sometimes boost your camera’s resolution, too. Play around with whichever app you favor until you’re fluent with it. Making music videos will be as fluid and reflexive as improvising on your instrument if you're familiar with your tools.

You can edit your video on the phone as well, but a laptop computer or tablet is much easier due to the screen being bigger. It’s hard to see what the heck you’re doing when moving clips around on a three-inch screen. Many tablets and laptops come bundled with video editing software. Play around with these applications first, so that you know what you’re getting into before shooting 275 short clips that you plan to splice together!

3. Go someplace where something interesting is already happening

Is there a concrete stairwell in your neighborhood where local lunatics do extreme parkour? Is there a bridge along the river where 70,000 roosting bats fly out at dusk each night? Film cool stuff that’s convenient to you instead of trying to organize a cast of thousands. You can get free, cool footage and also save yourself headaches.

Skip the costumes and special effects. It’s a lot easier to get permission to shoot your video at a Renaissance fair than to dress all your friends up as elves and throw axes at tree stumps. Whatever your concept, try to avoid anything that requires a large amount of equipment… or large numbers of people to show up somewhere.

Somewhere in your neighborhood, there's a cool place or event  that plays into your artistic vision. Film it. Don’t get bogged down and frustrated with a large production until you have a budget. Then you’ll have hired guns to handle the details and make things manageable.

Once you get into projects that require actors, vehicles, and props, you’ll be astonished by how easy it is to forget crucial details or lose track of critical objects. Murphy’s Law loves a movie set.

If you’re interspersing live video of your band with something else, like dashcam video from your buddy who races souped-up Volkswagens on the weekends, keep in mind that more cuts equals more work.

Using longer shots and fewer scenes greatly reduces the amount of work you’ll be doing at the back end. An excellent video can be made using just two scenes and chopping them up. After you brainstorm a million great ideas, whittle them down to two or three. There will be more videos, after all.

5. If your band is performing in the video, use one camera and keep it pretty

Most videos include the band playing the song, or at least the singer singing it. Instead of trying to film a live show, which is difficult to do well without two or more pro videographers, limit yourself to one fixed camera. That means choosing an attractive place to play and figuring out how to get the whole band in the shot. It means messing around with lighting so that things look the way you want – a tricky proposition that requires bringing as many light sources as you can to the shoot. It also means figuring out how to set up the phone or camera so that it shoots from the correct angle and doesn’t fall over during the shoot!

Of course, play along with your own recorded track so you don’t have synching problems when you edit. Lastly, talk beforehand about your look. Have a plan in regards to wardrobe and grooming so that you’re all on the same page with the image you want to project. This is a difficult and awkward thing to fix at the shoot, so it’s best to hammer it out beforehand. No logos, of course, unless the owner of the brand wants to pay you for it!

6. Start with a bang, end with a thud

Rockers know what song to open a set with, just like writers know that it takes a good line to start a novel. The first shot of your video should grab the viewer’s attention. The last should make a strong artistic statement that sums up what you’ve just seen. Discover the hooks in your video just like you would the hook in a song. Experiment until something looks cool, then build on it to ensure that nobody can forget your video. Then you'll be ready to take the next steps to make that video go viral.