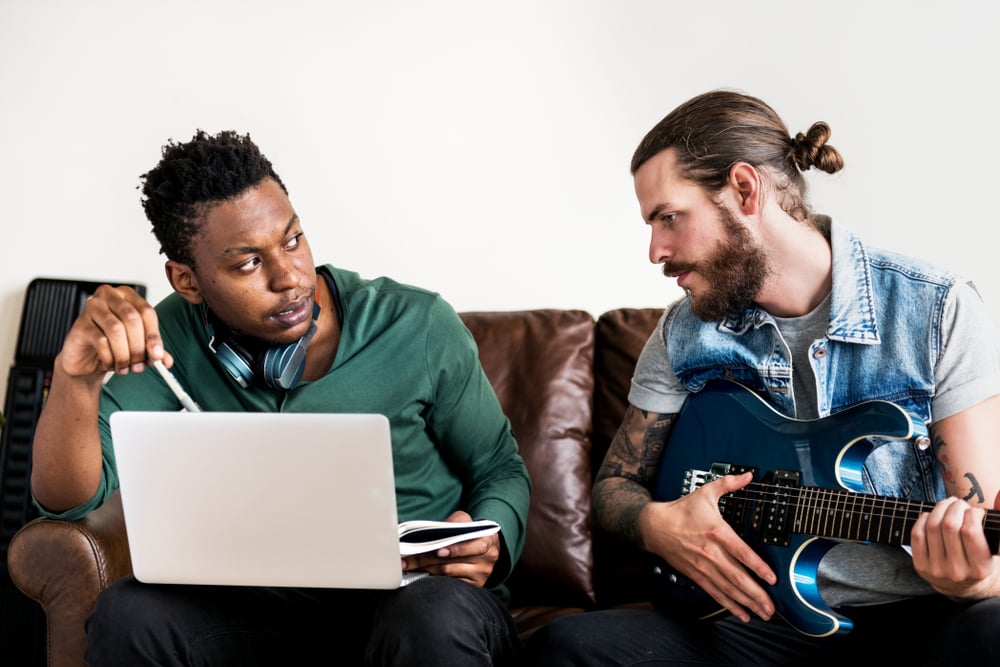 Picture this: you start writing a song. Everything is going well, and you’re loving it. Then you take a short break and go on social media and see an artist in your genre with more followers than you post about their latest release and new music video.

You watch the video. It’s great. People are commenting and sharing. You stop writing.

You stop writing because that “Fraud Talk” starts in that says your video will never be as good or get as much engagement or say anything different than what’s already been said.

You have a silent panic-mixed-with-guilt-mixed-with-anger attack inside because you want to be making progress so badly but something keeps holding you back and the creativity just isn’t flowing.

Many of us believe we fear failure, but is that really what’s keeping us from moving forward? If you think about it, not doing anything is its own failure. And we’re used to that; we can easily fall into a fear funk and take no action.

The fear is more often a fear of success. Failure is familiar and looks the same no matter what. Success will always feel unknown because we’re always reaching for the next plateau, the next frontier where we haven’t yet been.

It’s survival instinct to fear the unknown, but how can we overcome that and evolve to a better version of ourselves?

Below are three ways you can begin to overcome that fear and keep creating:

1. Acknowledge the journey, not just the end result

The exercises in her book help us realize an important fact about our journey towards reaching our goals: reaching that goal isn’t the only moment you can feel the way you want to feel.

Let’s say you determined that reaching your goal will enable you to feel valued. You have now identified a major payoff of what that goal will do for you and you can now be on a mission to feel valued in other ways along the journey.

Celebrating the small wins along the way and allowing yourself to find value/self-worth in those smaller steps not only makes the path towards your goal more enjoyable but it’s highly motivating.

You’ve become familiar with what achieving that goal can feel like, getting rid of a little bit of that fear of the unknown along the way.

(*This link is an affiliate link and I may receive a small compensation should you decide to purchase a product from that page.)

2. Remind yourself why the outcome matters to you

It’s easy to lose track of why we started on a certain course when we become distracted by other people’s successes. Talking ourselves out of something is a great way to lose sight of why we wanted it in the first place.

Why was writing that song important to you before you stopped finishing it? Knowing why we’re doing something or the impact we hope it has is a great way to get and stay motivated.

Recently Hofstra University’s Music and Entertainment Industry Student Association hosted a student-run music industry conference. During a songwriting panel, owner of JLS Artist Management and Noble Steed Music, Jason Spiewak, said, "Once you've been through hell and burned and beaten and lived through enough, you'll have enough to tap into to have something to say.”

His point was that if you understand you may have to write a lot of bad songs before you write a great one, but you’re clear on the fact that you’re passionate about getting to the point when you’ve written a great song you’ll do what it takes.

3. Allow your current self to reflect the person you're becoming

In order to not fear the unknown, get familiar with who you want to be and why.

If we let the “Fraud Talk” convince us that we’re defined by past failures or incapable of success due to someone else already succeeding then we’re at odds with that future self we want to see succeed.

People like to be consistent — our actions tend to be in sync with our beliefs and values. When they aren’t, we make an effort to line them up again. If we start to rack up the victories and accomplishments, yet still view ourselves as flawed, worthless, incapable, or deficient, we pull the plug to get rid of the dissonance. If it feels bad to fail, it feels even worse to succeed.

Understand that motivation and progress happens when things are in alignment. You can’t go zero to 60mph if you can’t see a clear, straight road ahead. Don’t veer off track by looking over at someone else’s lane. Driving is always more scary when your eyes aren’t on the road.

Next up: 6 Things That That Successful People Do That You Should Adopt For Every Morning