How to Record Your Band Using One Microphone 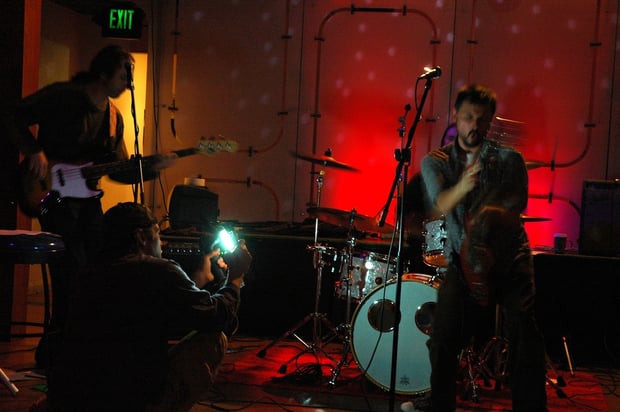 Like a luxury car loaded down with options, recording with a ton of gear has some downsides. There’s a lot that can go wrong, and it’s expensive. What about stripping things down, all the way down, and recording your band with a single mic?

The Cowboy Junkies did it back in 1987 for their album The Trinity Session, and the results were solid enough that the record earned a four-star review from Rolling Stone, in which Anthony DeCurtis praises the consistent ambience in which “the entire record seems like one continuously unfolding song.”

But getting a good recording from a single mic seems like a tall order, and goes against everything we’ve been taught. Close mic'd drums, isolation booths, and attempts to eradicate any sort of bleed have been part of the business for recording artists almost forever.

Is it realistic to get a great sound with players gathered around a single microphone, and would that mic need to cost as much as that luxury car in the first paragraph? Yes… and no.

Technology often does us the favor of reducing the price of things we need. You can get this Blue Microphones Yeti USB mic for under $140, and it’s made for just this sort of project. Of course, if you have access to a really nice large-diaphragm condenser mic, try that, too – but it needs to be a stereo microphone, like the Yeti.

If a stereo mic isn’t available, you might have to fall back on two condenser mics in the XY pattern (crisscrossing one another to form an X). Test your mic options and see what sounds best. You’re looking for clarity, even for the instruments that are farther from the mic capsule, and an ability to absorb nearer sounds (like lead vocals) without distorting.

The Cowboy Junkies set up in a church. Using a large room is preferred for this sort of project, like a lecture hall or auditorium. If that’s not an option, use a living room, complete with furniture and a TV.

It doesn’t matter where you go, but the room needs to sound good and be devoid of large outside noises like creaking radiators or someone mowing the lawn right outside the window. Avoid rooms with a lot of glass, and keep your single mic far away from any large windows.

3. Get everybody to play quietly

It’s absolutely critical that everyone in your band finds his or her quiet voice, a process that can be harder than it sounds. After all, the instruments need to be quiet enough that the players can hear your lead vocalist, and there needs to be a little headroom so you can all get a little louder on certain passages.

Drummers may want to switch to brushes. Guitarists may go acoustic. Bassists may turn to the upright. Practice something you’ve probably never practiced before: playing below conversational volume.

4. Create balance in the room

Once you’ve found the sweet spot in the room, arrange your instruments and players so that the loudest instruments are farther away. You lead singer needs to be closest to the microphone, close enough to hear vocal details, but not so close that sound from the instruments is blocked. Do test recordings and adjust the placement of your instruments until a good balance is achieved.

This is also the time to check for tripping hazards, tuck cords away, and remove extraneous sound sources from the area – vibrating phones in pockets, jingling wallet chains, or crunchy leather jackets. This will be a live recording, so breath sounds and creaky floors will be part of it. Don’t add any more sonic artifacts than you have to.

[How to Set Up Your Recording Studio Environment for Creativity]

5. Record without telling your band

A live recording has to be as pressure-free and fun as possible to get everyone playing well at the same time. It goes without saying that you have to be well rehearsed, but you also need to be having a good time. Once your sound is good and your instruments are balanced, it’s time to discreetly press record and do some “practice” takes that could be the real deal. Work through all of your songs before anyone knows you’re recording. Chances are, some of these will be final takes.

Continue working until you have three takes of each song. More than that and people start to get bored with the material. Now you can sleep on it, leaving everything in position, and come back tomorrow for the enjoyable process of picking the best take. If you go zero-for-three on one of your songs, you can always track it a couple more times.

6. Resist the temptation to overdub

Remember that consistent mood that made the whole album feel like one song? You’ve just created that vibe for your recording… and you’ll ruin it by cutting and pasting stuff, adding overdubs, or editing the track for length (such as adding a fade-out). The beauty of live recordings is their immediacy and honesty. Glory in that, and make a record that will whisper in your fans’ ears.