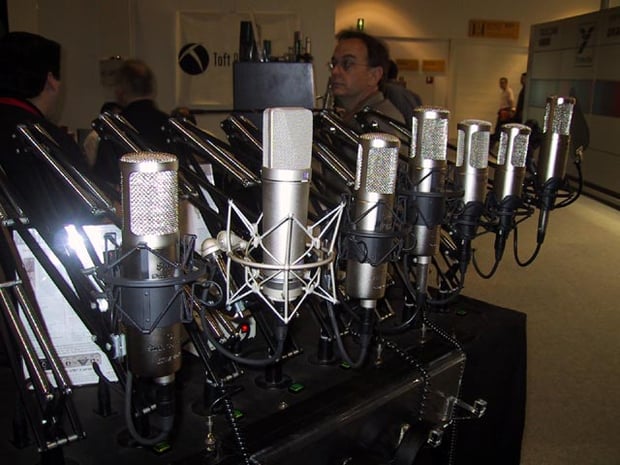 A version of this article originally appeared on The Recording Revolution.

Doing what I do, I hear this question a lot: "What is the best vocal mic for the home studio?" Unfortunately, it's a really bad question. Here's a better one: "What is best vocal mic for my voice/singer?" This is at least a step in the right direction, although I can't answer it for you. Here's the real answer: the "best" vocal mic for your voice or singer is the one that's the best match.

One thing that's so cool about singing (and singers) is that every voice is unique. Each voice has its own sonic characteristics that make it stand out from the rest. That's why you can have similar bands with similar instrumentation and musical styles that at the same time are clearly distinguishable – all because the vocalist is what separates them. From male to female, dark and smooth, to light and bright, there are seemingly infinite voices out there, and all of them different. Which means not every mic will capture them perfectly.

Every microphone has its own EQ curve

What's important to note (and this may be obvious to most) is that every microphone on the planet has its own EQ curve built in. We call this frequency response, but in essence, no matter how flat the microphone spec sheet says it is, each mic imparts its own EQ on the audio that feeds it. So, much like presets on an EQ plugin are kind of pointless because they don't know the frequencies you're feeding them, blindly saying one mic is the "perfect" vocal mic is just silly without knowing what voice it's supposed to capture.

The secret is in the perfect combination

In the end, all we're trying to do is capture a killer vocal. We want it to sound exactly as we hear it in the real world – only even better! The secret, then, is not in just picking a good mic, but rather the right mic for the voice. One that's a good match.

If you have a bright female vocalist, for example, many of the typical condensers might be a bit too harsh for her (since many of them have a slight top end bump). A better match might be a darker, warmer tube microphone that rolls off the top end, or even a ribbon or dynamic mic.

The opposite would be true with a round, warm, and dark sounding male vocal. Without a bright mic to "open it up," it might not cut through the mix enough. In this case, the brighter mic would be the "perfect" vocal mic. It's all about finding the right combo of mic-to-voice.

Now, if we had all the microphones and all the time in the world, I'm sure we could discover the absolute best match of a mic to the voice in question. But who has the money or time for that?! Let's take a more minimalistic approach and do a simple two-mic test.

To do this test, all you need are two mics – that sound different. This could be a condenser and a dynamic. Or perhaps two condensers that simply have different frequency responses. Whether you have to borrow a mic or sell something to buy a new one, just get a second mic (assuming you only have one) so you can do this test.

Set up both mics on stands right next to each other, running into two of the preamps on your interface. They should be the exact same preamp. Then, simply create and arm two mono audio tracks in your DAW, each labeled according to the mics, and hit record – letting your vocalist (or you) sing through a verse and chorus of the song.

Go back to your DAW, level match the different vocal tracks, and solo back and forth. Which sounds better? Which one complements the voice the best? You'll likely favor one mic over the other. Once you do, you've nailed a good match for that voice. Done.

If that's all you did, you'd be steps ahead

I know that test sounds simple and obvious, but have you done it? Or do you simply reach for your most expensive (or coolest looking) mic and hit record?

You see, if all you did was a simple two-mic test, you'd be in great shape because of two things:

This simple test (on each session) can help you learn your gear and learn different voices better – which will help you get to the perfect vocal mic match quicker the next time. Then, when you go to mix, you'll be confident about your mic choice, and your vocal will sound better before you do any processing in the DAW. Love it!

Have you done the two-mic test yourself? If so, what mic have you found to complement your voice the best? Let us know in the comments!

Graham Cochrane is the founder of the The Recording Revolution and a freelance recording and mix engineer living in Tampa, Florida. As a lifelong singer/songwriter and musician, his passion for recording and mixing has grown from the bedroom studio, to university (where he studied audio production), to multi-million dollar studios, to Fortune 500 software companies, and all the while freelancing for artists and bands worldwide.