How to Successfully Achieve Analog Warmth With Digital Tape Plugins 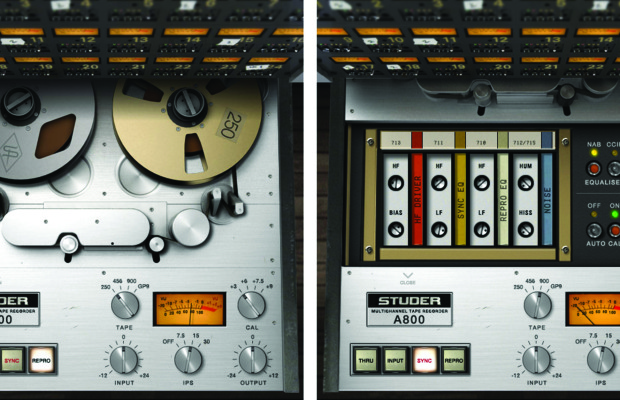 Digital audio workstations (DAWs) were introduced to the recording industry in the 1980s with the Fairlight CMI and Synclavier Digital systems. In 1989, a small company called Digidesign harnessed the power of the Macintosh computer and introduced a two-track DAW called Sound Tools. This product morphed into Pro Tools and has evolved over the last 25 years to become the standard for multitrack recording in professional studios around the world. I was one of the early adopters of Sound Tools and eventually Pro Tools, and my first hard drive for the system cost $2,200 for one gigabyte! Yes, those numbers are correct.

DAWs complemented analog recording by allowing engineers to do editing that was impossible in the analog world, or to transfer audio in from an analog multitrack, fix a problem, and send it back to analog tape. As with all computer technology, the performance grew, and the price fell. The analog vs. digital debate was on! Engineers loved the way analog sounded, but had to embrace the new technology and began to rediscover tube mics, tube compressors, and tube EQs to make digital audio sound warmer and more analog.

Waves introduced software plugins for DAWs that allowed the engineer to insert a compressor, EQ, or reverb onto a track inside the DAW. These plugins were developed to be digitally accurate and clinical. It wasn't until Universal Audio introduced plugins that were modeled from actual pieces of studio equipment that engineers really latched on. The plugin graphical user interface, or GUI, looked like the original hardware, and the audio characteristics and behaviors were similar to the hardware units. Still, the clean sound of digital kept engineers yearning for the sound of analog tape. Engineers were asking, "Could the gods please send us an analog tape plugin?"

Our wishes came true! Modeled plugins have come a long way since the late '90s, and the hottest plugin for DAWs today is based on analog tape machines. Universal Audio, Waves, Slate Digital, and other companies offer analog tape plugins. In the studio that I work out of, Dirt Floor in Chester, CT, we use the Studer A800 and Ampex ATR102 plugins developed by Universal Audio. At Dirt Floor, we don't mix "inside the box" – we use Pro Tools HD with 32 outputs and mix on an analog console. Our Pro Tools template has a Studer A800 plugin on every channel as the first insert. I used to own a Studer A80 MKIV 24-track machine, and I can tell you that a piece of gear is only as cool as the repair bills. Owning, maintaining, and operating a professional multitrack machine is tough. Parts, repair experts, and tape supplies are either expensive, hard to find, or both!

The analog plugins give you the sound of analog without the burden of the physical machine. For new engineers who have never used analog tape, the sound will be unique, but for seasoned engineers, it'll bring back that familiar sound to your ears just the way the smell of a crayon will bring you back to your childhood.

This plugin is very useful, not only for giving you the analog sound, but it can be used in ways a real 16- or 24-track machine could never accomplish. Different tape speeds, tape formulations, and calibration levels can be changed for every track depending on what instrument you have recorded. For instance, if we record an instrument that is a little bright, we can use a setting for that track that will "slow down" the transients of the instrument to bump the bass response with 456 tape, plus three at 7.5 IPS. The settings use a physical model of the limitations of that analog tape machine setting to adjust the sound of the instrument without an EQ or a compressor.

If we need to add some edge to a lead vocal, we can push the input section of the tape plugin to give us the natural-sounding harmonics of tape being overloaded. All of these parameters can be automated and changed to your desires! You can even turn the hum, tape hiss, and electronics noise on or off. As I like to say, "Try doing that on your Studer!"

The other analog plugin that we use is the Ampex ATR102 plugin from Universal Audio. It's primarily used in the mastering process because the plugin is modeled on the Ampex ATR102 two-track mixdown recorder. We can add a little extra analog sound, tape compression, or adjust the tone of the mix by adjusting tape speed, bias, tape formulation, etc. It's a very useful tool and helps glue the mix together nicely.

The Universal Audio plugins require special hardware from the manufacturer either as a PCIe card for your computer or a satellite Firewire or Thunderbolt box. Most manufacturers allow a trial period to use the plugin for free. Get a demo of an analog tape machine plugin yourself. I think you'll be very happy with the results.

Get the inside scoop on the flipside of the digital vs. analog debate with one producer's argument of why recording to genuine analog is best.

Steve Wytas is the chief engineer at Dirt Floor in Chester, CT, and owner of Audio 911, LLC. He has been involved in recording since he received a Radio Shack cassette recorder at the age of 10. Visit www.dirtfloor.com or www.audio911.com.