Is Your Band Ready to Demand a Guarantee for Shows? Venue Owners Explain the Reality 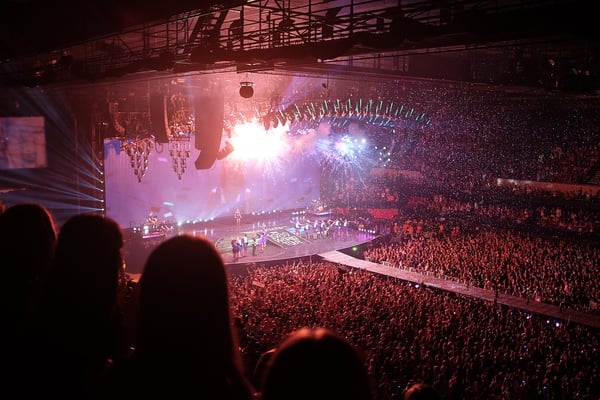 The guarantee you set should be directly related to the crowds you pull. (Image via pixabay.com

Is your band ready to start charging a guarantee for shows? If so, how much? That all depends on your draw – in fact, your guarantee should be determined based entirely on that.

That may sound like common sense, but apparently for some, it's not. I've had to turn down bands and even cease working with a promoter altogether because they insisted on a set fee that I knew was too high compared to operational costs and potential earnings.

At my venue, a 300-capacity DIY spot in San Juan, Puerto Rico, bar sales go almost entirely to funding the business: bartenders' pay, utilities and rent, restocking the bar for the next night, and so forth. And let's not forget the cost of sound equipment, which has to be repaired or replaced routinely, or upgrades to the space itself, which are needed on a rotating basis.

To further clarify the financial situation here: for myself and the other two owners, the club is not our primary source of personal income. We've got other jobs. Honestly, there are weeks that we don't pay ourselves at all.

So how am I supposed to shell out hundreds from bar sales and still make ends meet? If sales are exceptionally high, there's a little more wiggle room, but still, not much – we'll need even more money to restock the bar.

Issues with guarantees aren't exclusive to my club, of course. Elle Quintana, who's been the talent buyer for both stages at Reggie's in Chicago since it opened in September of 2007, says she's encountered problems negotiating guarantees with bands, too. She's even spoken about the subject at colleges. The core emphasis of her talks is that venues are businesses, and they cost money to operate. Sometimes bands forget that, she says. (I agree.)

“[Bands] treat venues like we're just here for them, to cater to their creative needs. Which is nice, but that does not pay the rent, then people are out of a job,” she says.

No two venues are exactly alike, but every single one has a bottom line in terms of operational costs. It's important to weigh how the club in question works against the payment you're looking for. Personally, it's kind of insulting when a band or promoter tries to insist on a fee you're not comfortable with – it implies they believe they know my market better than I do.

“Reggie's is a destination spot,” Quintana says. “We don't have 300 people just sitting around paying money waiting to hear a band. We do have a small built-in crowd, maybe 40 or 50 people from the neighborhood eating and drinking, but the rest of the crowd, they're there specifically to see the bands. The first time around when a band comes, it's rare that I will ever give them a guarantee. I'll tell them, listen, we'll split 100 percent of the door between the bands; it'll be a three- or four-band bill because we want a draw from each band. And then you'll get food and drink. If you do well and we actually have a crowd, I'm more than happy to give you a guarantee the second time.”

Even long-standing relationships with bands are susceptible to total rupture because of guarantee issues. Quintana recalls a situation with a group she'd been booking for years that suddenly started insisting on double the usual amount.

“They've got a new agent now who says, well, we want $2,500. But [the band doesn't] bring in those kinds of numbers. They just don't,” she says. “Just because you're a new agent and you're trying to impress someone, you can't go to an established club and charge twice as much. It just doesn't make sense. I literally just explained to them [that] they don't bring in that many people.”

The agent wouldn't budge; Quintana had to turn the offer down altogether. “I haven't seen them booked anywhere else in the city either since then,” she notes.

For bands at any level, it's important to consider the market in question. That guarantee didn't make financial sense for Quintana, but maybe it'd be appropriate for another city. Similarly, what works in Chicago won't always be appropriate elsewhere.

“I have a bunch of booking friends all over the country, like in Portland and New York and Iowa, all over. So we share information about bands, about their draws, what they're like to deal with, and what their guarantees really are compared to what they're asking for,” Quintana says. “Me and New York have the bigger markets, so we're usually able to offer a lot more money. But they'll try to hit up Iowa for the same amount, and they'll try to explain to them, we're not Chicago. We don't have that kind of money. And sometimes the bands are like, forget it, we'll skip Iowa. It's ridiculous. Play a Wednesday for half the money instead of skipping it altogether. That's a whole market of kids in an area that need more music.”

You may be ready for a guarantee, but no independent artist is ready for a set-in-stone amount to be charged across the board, regardless of the city or specifics of the venue. The process of booking should be more a negotiation than a declaration of demands – and booking agents and DIY bands need to take seriously what talent buyers and venue owners recommend. We know what we're talking about.

Next up: How Flexible Should Bands Be With Their Guarantee When Booking a Show? A Venue Owner's Perspective