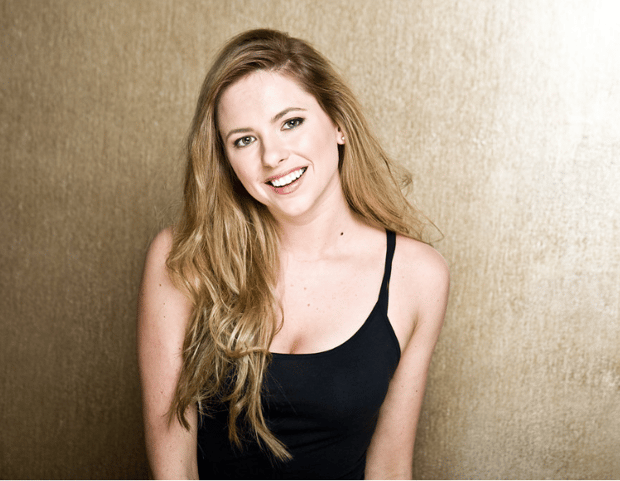 Country/pop artist and popular actress Kate Todd has spent her whole career working up and down the entertainment business with her songs and her passion for acting. Hailing from Barrie, Ontario, she's been incredibly successful making her rounds through show business, playing roles in award-winning TV shows such as Radio Free Roscoe, My Babysitter's a Vampire, Life With Derek, and Family Guy, and  landing big musical opportunities like the Toronto Independent Music Awards and Canadian Music Week (which you can apply to perform at through Sonicbids, too!).

You might be wondering what we initially thought: when it's so hard to make it as a musician and as an actor, how do you manage to do both? We got in touch with Kate to find out how she's been able to balance the two successfully.

What came first for you, music or acting? Did one help inform the other?

I played piano growing up and always loved to sing. My grandmother was the choir master at the local church and music was always playing on different levels at my home. I got my first role as Lily Randall/Shady Lane in Radio Free Roscoe by playing a bit of guitar and having this musical background. In between takes in my dressing room, I practiced my guitar and began writing songs. I performed many songs on the [show] and played my electric guitar regularly as well.

After the show, I went on to land other TV shows and had the good fortune of having my original music licensed on networks such as Showcase, Disney, and Nickelodeon.

Both music and acting require great skill and creativity. Tell us about the differences and similarities between the two. Do you feel that your acting skills come from a similar place as your musical skills?

I find that they do overlap completely. I teach both music and acting classes to students who are aspiring artists, and I find my techniques often cross over with each other.

First and foremost, with music, you have to find the emotional connection to the song, just as you have to find your emotional connection to the scene with acting. When you're singing, you're taking the audience through a journey. Some of the most famous artists aren’t considered the best technical singers, but they know how to make you feel something. You walk away changed. That is what a good performance does.

When you're in the recording studio, it’s just you and a microphone. Every breath, every nuance is picked up by the sensitive vibrations of the equipment. It is the same with film and TV – it’s just that the medium has changed.

On the camera, every blink and every look is picked up and magnified. You can keep the emotions and intentions close to your heart and incredibly personal. It’s all being captured on camera or on tape. Just imagine you're in your bedroom writing in your diary and you're showing us a small and vulnerable part of yourself. Keep it real and the camera or microphone will hear and see all.

Would you say you’re a better musician because of your acting experience, and vice versa? Why or why not?

I am a much more sensitive artist and entertainer because of my acting experience. I am focused on bringing the most real and true version of the song and musical performance that I can to the stage and studio booth. I have learned that sensitivity from film/TV acting. Of course, the amount of experience on set with my characters who were musicians added to my overall musicality and artistry.

How do you balance both acting and music in terms of building your career?

For myself, the industries have continually intertwined. All I have really known is balancing both together. I don’t see them as so different because I’ve never been so apart from either of them.

The real balancing act was when I began my university studies toward my Bachelor of Music degree. Trying to balance all three became a real challenge! I believe when you are so busy, it is crucial to have great time management skills and prioritization abilities. Life tends to come in seasons. There are enough seasons to do everything you’ve dreamed of, if you want to bad enough.

What are some of the most surprising things about the entertainment business that people on the outside might not know?

I think when I first started... before the internet sort of demystified things, a lot of people just thought that if you were on TV, you were rich! That is not the case, especially in the Canadian entertainment industry. I think that it’s part of the reason why Canada produces such great artists. We are continually pushing, learning, grinding, and mining for the thing that will make us the greatest we can be in that moment.

I think the most surprising thing people will learn is that there is some kind of odd love/hate thing we get from the struggle, as that is when you're becoming the best through the worst of times.

Networking only works if you're doing good work on your own. I think that people need to be intrigued by more than just a business card at a cocktail party. There are so many tools out there for you to do the bulk of your artistry on your own before even getting to the networking stage.

Once you have amassed some work that you're proud of, then reach out to your friends and connect with them. Surround yourself with like-minded people to take you to where you want to be! Thats really the secret to networking, I feel. For myself personally, I believe that past performances, good work ethic, and being cool to work with has led to me being called again for gigs or opportunities.

We're really impressed with your huge social media following. From your first follower to the tens of thousands you've amassed, what strategies did you use to build your online presence?

Well, thank you! I will have to say that I am very fortunate to have such a large group of people wanting to follow along for the ride. The bulk of my shows were released before the invention of Twitter or Facebook and certainly Instagram, so to have fans from those shows and my music seek me out and continue to support has been amazing.

I never really had any kind of strategy, to be honest. I just try to keep it real, grow with my audience, and maintain a level of interaction that I can manage on my own. I really enjoy interacting with my supporters. It feels amazing that I can still release content of my own onto my platforms and be able to interact with the loyal people who have been with me since day one.

Tell us about how Sonicbids has been a tool for your career. What have been some of your favorite opportunities?

Sonicbids is incredible for independent artists. This is the way to take control of your career! In so many ways, artists can feel as though they don’t have much control over certain turns in their career. I feel that Sonicbids really helped me to feel excited and empowered by the amount of opportunities listed. I really enjoyed booking shows such as the Toronto Independent Music Awards, Canadian Music Week, and Winterfolk through this platform. These are some of the biggest showcases in Canada!

What advice would you give to a budding artist with more than one passion?

I would recommend time management and focus. There is never any time for down time in creativity when you're managing two artistic careers. This can be a good thing! It helps keep you inspired, creative, and motivated when one discipline is not keeping you as busy as you’d like. I love having both careers. I feel I have been very blessed to make a living doing what I love in both sectors.

For an aspiring artist, I would suggest starting with attending workshops and signing up for lessons... to hone your skills and gain insightful knowledge from professionals who have gone through the process and have the experience to take you to that next level.