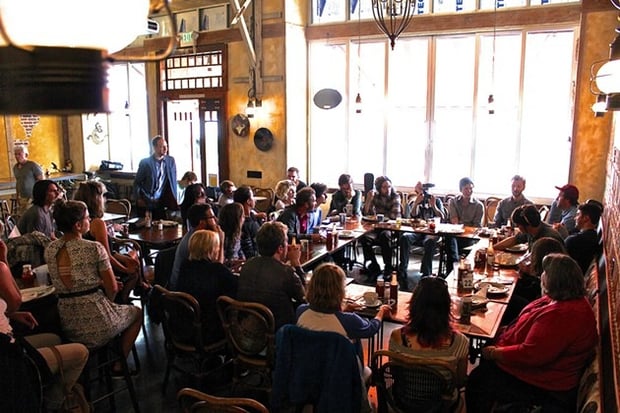 In the music industry, who you know is everything. It doesn't matter how talented you are, if you don't get in front of the right people, your future in this industry is questionable at best. Unfair? Maybe. But once you know how to use this to your advantage, you can not only leverage the situation to bring your career to the next level, but you'll probably meet a lot of amazing people as well. So instead of cringing at the word "networking" like it's some arduous task, take a minute to appreciate the incredible power that simply talking to other people can have.

Check out these five tips for networking, and remember – networking is the name of the game in the music industry.

1. Reach out to previous contacts

When I first branched into public relations from blogging, my biggest obstacle was finding initial clients. So what did I do? I made use of any and all previous contacts I'd made over the past six years running my music blog and let them know what I was doing. Some were bands that eventually ended up signing up for campaigns, others were industry professionals who could point me in the direction of others who may need my help or could vouch for me as I grew my company.

For six years, I'd been building up a network without ever even realizing it – and I'm betting you've been doing the same thing. Think about all the people you've interacted with over the last few years and how they may be able to connect to what you're doing now. Don't just bombard them with what you need, but rather, reach out, ask them how they/their projects are, and then tell them about yours. Put in the extra effort to suggest a way you might be able to work together or help them out, rather than just asking for their help. Make friends first, do business later, and you'll find your network begins to grow.

Lacking a strong music industry meetup in your town? Create one yourself! One of the absolute best ways I've found to make connections in this industry is in person. But of course, trying to connect with other bands/music industry professionals outside shows can be tricky.

I was fortunate enough to find an amazing group in San Francisco called Balanced Breakfast which meets every week for two hours to talk shop. There, I found new friends and new connections. When the time came to leave the Bay Area, I was heartbroken that I'd no longer be a part of that group. So what did I do? I talked to the founder and started one in Boston and then Toronto, and soon, I'll be starting them all over the country. I've secured so many amazing connections through these in-person meetups, including many which have led to paid work. In the age of the internet, it can be easy to forget the value of face-to-face interaction, but with a little motivation and hard work, creating your own meetup could be just what you need.

Making friends with other bands is a no-brainer. But how do you take that connection and bring it to the next level? Flattery. It really will get you everywhere – so long as you're sincere about it. One of the best ways to connect with local artists in your area while dipping into their fanbase and widening yours is to cover their songs. Think about it. A cover song is one of the best ways to tell a band you really dig what they're doing, and it’s also one of the most unconventional ways for local bands to connect with other growing bands. Just don’t forget to reach out to them directly and via social media once that cover hits YouTube. You can bet they'll want to see it.

By nature, I'm a pretty quiet person. I tend to shy away from events that require talking to people (I know, that doesn't leave a lot), and large crowds freak me out. But on a recent trip to Toronto, I found myself pushing my comfort zone out the window, and going to almost every event I was invited to, especially if it was in any way related to the music industry. What I found was that although not everything led to direct, immediate results, they almost always led to new connections, long-term business growth, and a whole lot of personal growth. Beyond the people you meet, you force yourself to be more social, to practice your pitch, learn to speak to people with confidence and ease, and ultimately strengthen yourself by just meeting people face to face.

Everyone knows that social media can be a great way to boost your career. But what they don't tell you is that it isn't just making sure that you're posting X times a week, sharing relevant information, and not being an attention hog. You can use easily your social networks to connect with industry professionals and fans. Here are just three examples to get you started:

Finding the right Facebook groups to join can be a huge advantage. It'll connect you to tons of other industry professionals, allow you a platform to ask questions and speak your mind, as well as a way to access virtually anyone you may need to know in the industry. There are a lot of groups out there, so don't be afraid to ask friends about the ones they're a part of. Many industry groups are fairly private or selective, so making connections that can vouch for you can be the difference between a top-quality group and one that's become purely a spam dump.

Ever notice how when you tweet, you get practically no interaction, but when you go out of your way to interact with others, suddenly your phone is blowing up? It's because people want to connect about things they like, and when you start relating to something they've clearly shown a passion or interest for, they're all ears. Because of this, Twitter is an incredible way to make friends and connections within the industry. With Twitter, you have access to nearly anyone you could hope to connect with, and instant access to their interests and hobbies. Finding someone whose attention you want to get and responding in a real, genuine way to his or her tweet can be just the introduction you need.

Reddit is a fantastic, albeit underused tool. Not only can you seek advice in all areas of the industry, such as feedback on your songs, website, etc., but you can also make some genuine connections from across the country or world, which will be especially useful when you decide to tour. Like any forum, use common sense and expect to be met with at least some cynicism. There are always people out there who will want to put you down, but there are even more that will want to help you out and connect. So don't let the Negative Nancys of the internet get you down.

Angela Mastrogiacomo is the owner of Muddy Paw Public Relations. Muddy Paw specializes in working with up and coming artists on personalized campaigns designed to bring their careers to the next level. To date, we’ve secured placements on sites such as AbsolutePunk, Substream, Property Of Zack, PureVolume, Anti-Music, and many more.