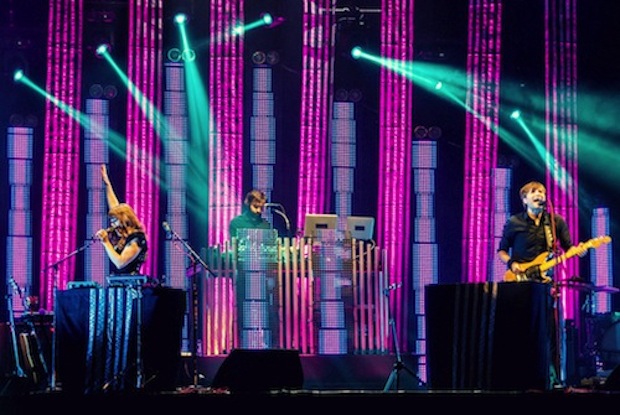 My friend (and frequent collaborator) Janet Simpson sent me a record she recently finished. The project, Timber, is collaboration between her and a Nashville-based songwriter named Will Stewart. Their forthcoming EP (which, by the way, is lovely) came together via email. They would take turns sending songs to each other, giving notes along the way, until they amassed enough material to hit the studio.

When Simpson and Stewart met in Birmingham to make the record, they hadn't really worked out the arrangements – in fact, they had barely ever hung out in person. Instead, they would discuss ideas over coffee and then head back to the studio and start working, playing most everything themselves – guided only by instinct, time constraints, and trust in each other and the songs they wrote.

What I love about Timber's story is how they took what still feels like a futuristic route to collaboration only to create the final product in the most organic of ways. Of course, sending files via email is hardly futuristic – it's practically old school in 2015. In the last few years, collaborating online isn't only easier than ever, but it can be also be incredibly ornate thanks to a variety of apps, websites, and online communities. Still, at the end of the day, no technology can replace the human element so essential to great art. So here are some ways to intersect the two.

Your methods may work perfectly for you, but your best intentions might get lost in translation when working with others. Sites like Songspace allow you keep your ideas in one place, from lyrical fragments or that melody you hummed into your phone, to the latest version of your demo. Like many of these online tools, community is an essential feature, and Songspace allows you to share all these ideas with your creative confidants, your business team (including publishers and labels), or other potential songwriting partners.

One way to find those potential creative partners is SongwriterLink. Currently in beta (anyone can become a beta tester and have full access to the site for free), SongwriterLink utilizes an algorithm (similar to dating websites) that matches you up with other songwriters and beat producers based on your personal preferences, style, and goals.

Once you find someone you want to work with, you might utilize a company like Songsplits to create split sheets and publishing agreements that can instantly be sent to your co-writer, managers, attorneys, etc. in order to be sure you're fairly compensated for your work – a service it claims to provide for the likes of big pop acts such as Drake, Kanye West, and Lady Gaga.

Take advantage of the almighty cloud

Using email isn't just old-school by 2015 standards, but it's sort of impractical – especially if you’re sending high-resolution files. Most email programs still have limits on file sizes or choke when sending larger MP3s and WAVs. Now Google Drive and Dropbox have become the standard for sharing large files, thanks to the magic of the cloud. Both services are supremely affordable, easily accessible from any computer or smartphone, and provide the added bonus of serving as a cloud-based backup of your most important data.

When sending files via Dropbox or Google, it's best to keep them simple. For example, if you're working on a guitar part at home, don't send back the entire session – just the stem of your performance. When doing so, always make sure the track has been bounced from zero. Even if your guitar part was 30 seconds long, you'll want to make sure your track starts from the beginning of the song, enabling whoever is in charge of the master recording to drop the track into the song with no guesswork. And while we're keeping things simple, be sure to only send raw files.

Splice, a new cloud-based collaboration tool, looks to eliminate that problem by combining the ease and accessibility of cloud computing with paradigm-busting generosity – allowing users to easily share sessions even if they're not using the same DAW. Splice also sells a variety of plugins that can be made available to all of your collaborators, even if only one of you has paid for the full version (though limitations to this practice vary among developers). In addition, they've recently launched Splice Sounds, which gives you access to over 500,000 samples for $7.99 a month.

Splice is like a Dropbox tailor-made for musicians, songwriters, and producers. The service is free, but require users to download software that will manage your compositions in a local folder and mirror them in the cloud – in other words, one terabyte of dedicated music storage on your personal computer will grant you one terabyte of cloud storage, providing easy access and the additional peace of mind knowing that your new music is backed up should something happen to your main machine.

"If I was collaborating on a whole project, I would probably still…send mixes back and forth and send individual tracks when necessary," says Todd Beene, a guitarist and pedal steel maverick who's logged a lot of time and miles with bands like Glossary, Lucero, and Chuck Ragan. "But for a DAW that does it all and won't break the bank, doesn't require dongles, doesn't have multiple crippled versions, and always updates, Reaper is unbeatable. Having used it for a few years now, I'm totally sold."

At just $60, Reaper is indeed a bargain. Seemingly built on both good intentions and sturdy code, Reaper is a full service DAW that's won raves thanks to its efficient design and compatibility with a wide array of hardware and plugins (though it also has plenty of worthy native options). It has longevity, too: its makers are very receptive to the needs of its community, and each license includes two full versions worth of regular and notably stable upgrades – so your purchase of Reaper 6.0 will have you covered all the way up to Reaper 8.0. There's tons of info on Reaper's website but, on a personal level, an endorsement from Mr. Beene goes a long way. And, at that price, you're just a gig or two away of getting your entire band set up.

Okay, so you've been bombarded with tools. What about strategies and best practices? Obviously, there's not right or wrong way to go about writing a song, but there are ways to help the process run smoothly and keep yourself open to the flow of ideas without being in the same room as your co-writer.

Label your tracks and files

"The moment somebody opens their recording up and starts to add any kind of [sound effects] or EQing, it's like throwing soup in a blender and hitting the 'puree' button," says Geoff Calhoun of space rockers Leviathan State. He also advocates communication and decisiveness: "Good old-fashioned phone calls are helpful. Send a file you're done with. Coming back a month in and resending the same guitar take 'but this one is better' can be maddening."

One way to sidestep that madness is to label your tracks properly. "This may sound silly, but file management is so huge to me," says Beene. "Along with that also goes file naming conventions. We used to have to truncate everything, but that's not necessary anymore, so give that file a name that means something! Not GTR3-FX_Fz-122212299485.wav."

Again, keeping the lines of communication open is important, and not only for keeping tabs on who's recording what, but for establishing the method to your madness. "I do a fair bit of overdubbing on other people's projects," continues Beene. "For me, it's ideal to receive a two-track mix of whatever it is. I pull that up and overdub my part to it. Then I send back a mix with my overdubs on it. If they like it, I send back a full resolution overdub track that begins at exactly the same time their original two-track mix begins so they can fly it in easily. This way, it doesn't matter what DAW anybody is using."

Some people hate writing songs to a click track or drum loop, but by setting a tempo and sticking with it, you'll ultimately give your digitally oriented collaborators something more to play with. Make note of the tempo in a note or as part of the file name. By entering the tempo into the DAW, you can easily add proper drums or, at the very least, quickly create parts with a little less care in regards to getting the timing exactly right, letting the computer make the necessary adjustments. You can get the "authentic" take later.

"Try to allow for equal amounts of creative control over the project.... Makes it easier to collaborate," says Chance Bridges – one half of Bedroom Suite, a collaboration with Canadian musician Bret Parenteau. "Don't rush it though – people get distracted with life sometimes. Our first tape was completed in practically a week, [but] the second one took a whole year."

James Jackson Toth, aka Wooden Wand, is a prolific, critically acclaimed songwriter who's made the most out of a few long-distance collaborations despite preferring to work in the moment. That said, he tries to take advantage of being outside his comfort zone. "I make the best of it by viewing it as a sort of challenge and an excuse to try things in private that might seem silly in a studio setting," he says. "Another advantage is not being 'on the spot,' so to speak. You can sit on a part for a few days, try something, listen back, erase half of it, sleep on it, come back, etc."

But, like Timber, Toth views online collaboration as a means to an end. "The World War IV LP from a few years ago was [a means to an end]…. The band would send me riffs, ideas, progressions, etc., and I would add guitar and then try to write melodies and words over top. Then I'd send them back for them to hear. By the time we all met up to record months later, we all had dozens of ideas for each song, because we had that lead time to listen and think about what we could each contribute. It is important to note, however, that while the record was written across hundreds of miles, it never could have been actualized if all of those people didn't, at some point, make an effort to all be in the same room together for the better part of a week. That's what really made it great. I guess I think of it like the difference between ordering food inside the restaurant versus using the drive-through: never underestimate eye contact."