5 Mistakes Musicians Make to Get Ahead in Their Careers 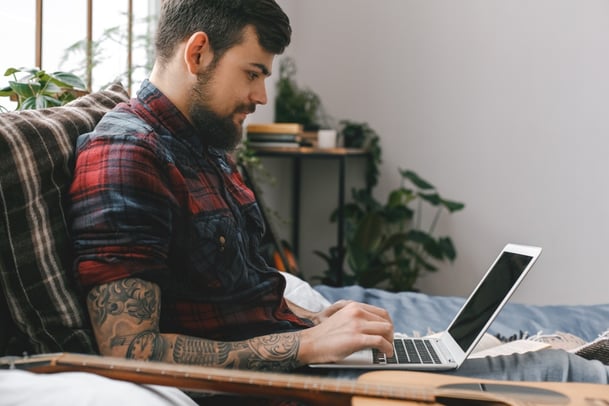 Hopefully this guitarist isn't in the process of setting up an auto-responder. (Image via Shutterstock)

If your music isn't selling as much or as fast as you'd like it to or enough people aren't coming to your shows or following you or following up with you, you may want to look at what you're doing that can be turning them off from you and/or your music.

Remember: There's no fast lane to success. The faster you rush to get to the top, the faster you will either burn out or trip over your own actions on the way there. Below are five mistakes you want to avoid when attempting to grow your career in music.

No one likes this. No one. Even if someone does click on your music, they're doing it with an overtone of disgust and a "this-better-be-worth-my-time" mentality. That should never be how you want anyone to feel when they're about to listen to your music.

It’s not difficult to identify what feels spammy and what doesn’t; we instinctively know. And the majority of musicians never want to be the type who spam people.

When artists feel completely overwhelmed with deadlines and endless tasks and they’re panicked to get their music out to the most people in the quickest way possible, however, spamming usually seeps into their marketing efforts.

In this day and age of media overload, many people think they need to be louder to be heard. They don't. They just need to be better. Be better than the competition. And not just talent-wise. Be a better listener, be a better connector.

Your music is an extension of you, so connect with people beyond your music. When they connect with you, they'll want to know more about you. What's a better way for them to get to know you than through your music? In this way, it becomes a more organic and natural progression and connection to your art, rather than a terse click of a link.

[How to Send a Killer Email to Anyone in the Industry]

Another mistake many business owners and musicians alike make is misinterpreting auto-response as a time-saving tool; it's actually a huge turnoff. No one likes to feel like their time is worth less than anyone else's.

Much like email pitches, many artists assume automatically sending a link with their music to someone via email or social media can’t hurt because there’s a chance they could be a fan. But this logic is flawed, because a fan, first and foremost, wants to feel like you care.

Don’t start the relationship out with an assumption that a link to your SoundCloud is how they want to digest your music and the moment they follow you is when they want to hear your music.

DMs can be effective when used in the right way. “Thanks for the follow, I look forward to connecting! How’s your week been so far?” makes it personable, but vague enough that you don't turn off someone who may not be in your target market.

Leaving them a question they can easily respond to will spark engagement and, once a conversation is in motion, you’ll learn more about who’s following you and why. That’s more valuable than spamming your music to them in an auto-responder via email or social media (i.e., point one above).

3. Failing to do your research both before and after a meeting

So many artists fail to take the time to read up on who they are meeting, or who they just met, before attempting to bring the connection to the next level. It's up to you to keep track of the people you’ve met or plan to meet and determine how the two of you may build a meaningful connection.

You can go to a person's site, take two minutes to read the main points about them, and then follow up with them asking a specific question that you actually have. Taking the time equals showing you care. When people see you care they will care enough to do the same. And that's how a connection is made.

4. Doing all the talking

Remember, the people you speak to are human beings, not stuffed animals that you plop on your bed and talk to in order to practice your pitch or try a new song for the first time.

Showing you can be a good listener illustrates you're invested with your time and attention to that other person. It also shows you're open to new things and ideas. Being open to what someone has to say allows the other person to feel heard and understood.

Too many people at networking functions treat the event like it’s speed dating. It's as if a bell goes off in their heads, and they're onto the next person. It doesn't matter if the conversation is over or if it has even started: The hunt is on, and it is real.

Don’t be the person who just wants to collect business cards and keep it moving so you don't miss out on someone else. Stick with the plan of meeting a handful of people and making a great impression on them.

Chances are, if you don’t meet everyone there, the people you do meet will know those other people. You’ll be better off making a great impression on them then getting a personal introduction to the others you haven’t yet met.

Play the long game. You’ve got an entire career to build and your reputation will follow you wherever you go, so sloooooowwww dooooowwwwnnn and approach connections from a human perspective.

Never lose sight of the fact that there are humans on the other end of the computer screen. Make them the focus, and you’ll be hard pressed to find someone you can’t build a meaningful connection with that will ultimately result in the growth of your career.

[The Dos and Don'ts of Music Industry Networking]