Here Are the Dead Simple Ways to Improve Your Sound in the Studio, Instrument by Instrument 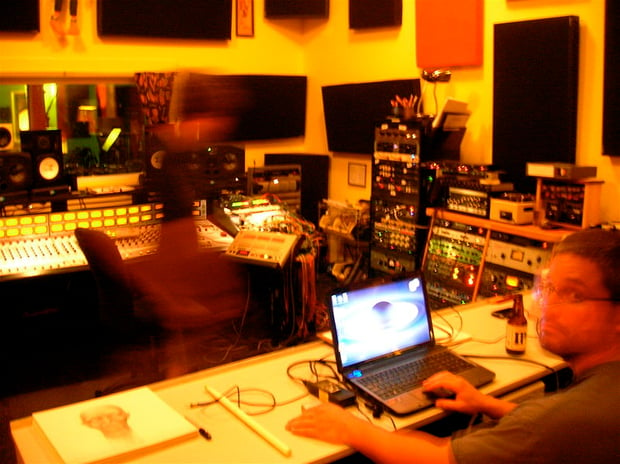 Maybe you’ve spent hundreds of hours in the same room, rehearsing your material. Perhaps you’ve performed dozens of times, on different stages, using the same gear. You’re used to your sound. You like it. But now you’re in the studio and something just doesn’t seem right. What’s the problem?

It’s no surprise when things that were once okay suddenly sound unacceptable in the studio context. For one, you’ve never scrutinized things so closely before. You’re paying attention to every detail, and some things aren’t up to par. Also, you’re hearing things in a different room, possibly though unfamiliar monitor speakers or headphones.

When you’re spending time and money to record, and you’re ready to put your material out there in every possible medium, you’d better make sure the results are sparkling. Before throwing money at sound problems by replacing gear, try these simple solutions that can make a huge difference.

We’ll start with the drums, since they’re the most labor-intensive instrument to record and mix (and usually the first track laid down). With so much hardware and so many sound sources, the drums are a friendly environment for glitches and weird noises that can infiltrate your recording. There might be an annoying buzz hiding in your hi-hat stand or a loose nut someplace rattling around. But the snare drum is the place to start.

Snare drums are pretty complex sound sources in themselves, with two heads, tension hardware, the stand, and the snares themselves. The most common snare problem is an annoying metallic ring, and sometimes the sustain of the drum has a bad “aftertaste” coming milliseconds after each hit.

Lots of drummers carry a roll of black duct tape around and tape all sorts of things to the drum head to deaden that ring. But the easiest thing to do is to grab one of those credit card offers you get each day in the mail and throw the whole envelope right on your snare head. Stuffed business-sized envelopes are just the right size to leave plenty of surface for hits. They do an almost magical job of killing irritating snare ring, and if the sound isn’t perfect, you don’t have to peel anything off the head – just toss them in the recycling bin (or apply for the credit card… but be aware that credit cards can be a musician’s natural enemy).

Inside your kick drum is another trouble spot. Most drummers throw something in there to reduce boominess and an overly pitchy overtone. The problem is that whatever you’ve thrown in there moves around. Conditions inside a kick drum are similar to those in an uncovered pickup truck bed on the highway: half earthquake, half tornado. If you don’t want your bass drum sound to change haphazardly throughout a take, find an object whose dimensions are consistent, such as a piece of egg crate foam cut to fit. Make sure it’s tight against both heads so it stays put.

If the sound is too dead, just cut it thinner, but don’t make it small enough so it can walk around inside the drum. That’s the reason folded blankets and small sofa pillows don’t work well. They don’t look very good in there, either.

Lastly, think about your bottom heads. They're out of sight, out of mind for most drummers. You can tune them the same as the top heads, a little lower or a little higher, but make sure they’re tuned deliberately and don’t have any holes. Keeping bottom head tuning consistent across the set will make even cheapo student drums sound like a pro set.

[6 Secrets of Getting a Fuller Drum Sound on Your Recordings]

The trouble with tube amplifiers is that they don’t break all at once. The tubes just gradually get tired, and with them goes your guitar tone. You don’t notice because you’re playing the whole time… and it’s not like you can pick one up like a light bulb and see the broken filament inside.

If you can’t remember the last time you changed your tubes, change them now – all of them! Don’t be cheap and just do the older ones. A new set of tubes is a lot cheaper than a new guitar amp, and you’ll notice the difference instantly. By the way, this time, date the new tubes with a black marker so you know when they went in!

If your guitar tracks sound weird in the control room and you can’t quite figure out why, pull out a digital tuner and check your intonation. Do this by comparing your open strings to your harmonics on the twelfth fret. Adjust the saddles until any minute differences are ironed out. Perfect intonation will put the power back in your power chords.

Also on the guitar front, what gauge strings are you using? Yes, it might be easier to play 10-fingered arpeggios on super-duper Slinky strings, but remember that thinner strings make for a thinner sound. Especially in the studio (and especially on rhythm guitar tracks), it might be a good idea to power up with some heavier strings. After restringing with heavies, check your tuning, intonation, and truss rod position to make sure the slightly increased tension hasn’t thrown anything out of whack.

So you’ve tracked your rhythm section and a lead vocal, and your lead singer sounds like just a face in the crowd, struggling to find a spot in the mix. The best method to make vocals stand out without having them drown out the rest of the band? Compression.

Remember that a vocal track is much more dynamic than the other instruments, so key syllables might be lost while others scream out over the instruments. No track in your mix wants compression more than a lead vocal. Slap some compression on that track and watch it clear itself some space in the stereo field. It’s like magic. Most DAW systems have onboard compression, but if your system does not, you can get into a rack compressor like this Behringer Composer Pro-XL for under $200.

[How to Use EQ and Compression the Right Way]

The other thing to consider when it comes to a vocal is your performance. What is your approach to the song? Frequently, a vocal attack that was good enough for a demo seems to be floating outside the music when you get into a serious recording.

You can vary your performance intensity, singing in a whisper or a scream. You can change your vocal attitude, delivering a vocal that’s almost spoken word. You can sing in character, right down to a Boston accent, to make the narrative voice of your song stand out. You can even make yourself a little less comfortable by performing while kneeling, lying down, or slightly out of breath after running laps around the studio.

As a singer, you’re an impressionist painter and the song is your blank white canvas. Good singers never use the same approach; be intentional about yours.

[7 Secrets of Getting Pro-Sounding Vocals on Home Recordings]

You will meet bass players who have never changed their strings and will compare them to things like “a broken-in pair of Doc Martens” or “a worn-in pair of jeans.” That’s great if you play punk rock and have such nice technique that your fingers whisper over the strings and you never break one. For most of us bass players, changing strings is something we mean to get to but just don’t.

How old are your bass strings? Was Obama in office when you put them on, or were we worrying about the Y2K bug? Before you hit the studio, hit the music store and buy a new set. Then, beat them up with a crazy jam session or live show to put a little dirt on them.

Also in the world of the bass guitar, nobody gets sent to the back of the line like the bass player when it comes to upgrading gear. The drummer gets a new China Boy and bundle sticks, the guitarist gets three new pedals, but the bass player is still playing through a Peavey 15 that somebody’s older brother used for middle school jazz band in 1998. Those solid-state combo amps are the Volvo station wagons of the amp world; there’s nothing that great about them, but they’re immortal. In an industry that churns out dozens of brilliant bass cabs and heads, don’t you deserve one you got on purpose?

Of course, amps are pricey, even on the used market. If buying a new amp isn’t in the cards, there’s a cheaper alternative: an amp emulator like Tech21’s marvelous SansAmp. You can use this as a direct box, both live and in the studio, and from experience I can tell you it sounds fabulous. You’ll have a lot of flexibility and outstanding equalization without moving a single mic or twiddling a knob. And with all the other things to worry about when getting an amazing recording, it’s nice to just hit the “pro sound” button on a key tone and forget about it.