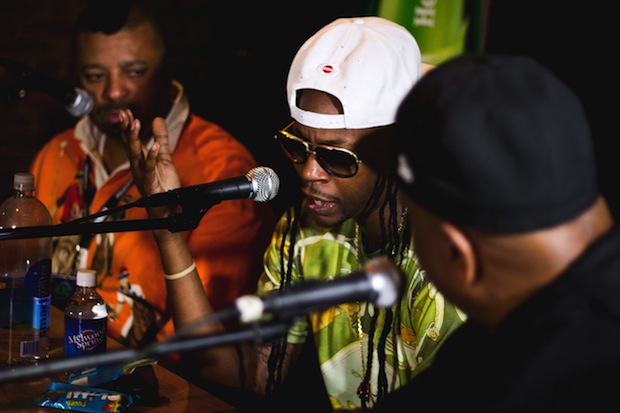 The A3C Festival in Atlanta, GA, is one of the largest hip-hop festivals in the industry, and they're looking for 30 Sonicbids artists to perform. This is an incredible opportunity, as A3C goes far beyond the music to include dozens of educational panels and networking events for all in attendance. Any Sonicbids band that is chosen will have full access to everything the festival has to offer. We spoke with EDU Development Manager Tom White and Assistant General Manager Fati Ahmed about the top-notch music industry wisdom the festival has to offer.

How did A3C get its start? Was the educational aspect always a big part of it?

Tom White: The first A3C took place in 2005 and was put together by an indie hip-hop label called Arc the Finger (ATF) Records, owned and operated by Brian Knott and Kevin Elphick. It was a way to repay out-of-town artists, booking agents and promoters that featured ATF artists by having a show for them in Atlanta. ATF dissolved around 2007 and Brian continued the festival. There were panels and educational content [when I started volunteering] in ’08 and ’09, but it wasn’t officially labeled as such. In ’10 I had the opportunity to create and present five panels that were well received, and up until last year, the majority of EDU content was created and executed in house by myself and an awesome team of coordinators: Cae Green, Tai Saint-Louis, Sophia Brimm and Prima Diego.

Fati Ahmed: For the most part, the festival was definitely primarily a concert in the early years. But there are many hip-hop concerts, and not many hip-hop cultural events. It seemed like there was a real need for a festival that brought together all aspects of hip-hop culture and gave folks in the industry a place to network, connect and come together. Tom’s really grown the EDU content, and now we have so much going on during the day — art, film, style, pro-audio, tech — that there really is something for everyone.

I understand that the festival has grown exponentially over the past few years. What are some of the things that have changed and evolved?

White: I think two of the biggest ones have been extending the length of the festival from three to five days and the location change over the years. Going from Centerstage to East Atlanta Village, the Masquerade to finally citywide. I think a big change as well has been the shift of A3C content from being produced almost completely in-house to turning the festival into a platform to curate entertaining and insightful concepts from some of the brightest and motivated minds working in entertainment.

The industry panels that you've set up sound like an incredibly enriching experience for artists who attend the festival. Are the panels generally geared more for the community of artists that are playing, or the audience that is attending?

It’s important to us that even as we get big, we maintain our feel as a family affair.

White: I’ve found there’s been a great deal of overlap between the two. Hip-hop fans tend to be more aware of the business side, and many attendees have aspirations to start a career in music that doesn’t involve performing like journalism, management, publishing administration, etc. They also might have a friend or someone in their family who wants to get their foot in the door, but doesn’t necessarily know how. We do our best to provide credible people to speak on these topics. The challenge has been finding a new approach/twist on the “meat and potatoes” topics of publishing, media, production, social media, etc.

Ahmed: This year we’re branding our content into seven tracks: Business of Music, Artist Development, Tech, Film, Culture (which will include style, art and dance), Academic and Pro-Audio. Some of these tracks, like Artist Development and Business of Music, are really catered towards folks in the industry. However, as Tom said, there’s so much crossover in interest, and so much great content, that our goal is to make every topic as interesting for the festival-goers as possible while still being very relevant to the industry folks.

It seems like the community based around A3C is really strong. I remember one of the artists explaining in a promo video that seeing people play at A3C year after year is a great way to keep track of their progress in the industry. Do you get a lot of regular artists who come back every year?

White: Absolutely. Internally, we call the festival “The Industry Fall Break” and do our best to maintain a vibe of friendliness and inclusion, which I think is a big reason people come back year after year.  I’ve met many artists who were initially rejected, but used the discount code and came out anyway, attended panels, networked their asses off and in the next year or two, were picked for a stage. Even if you’re not picked for a stage, you should still come out. It’s like a big family reunion, and we want to meet more long lost cousins.

Are there any specific panels or artists that you're really looking forward to this year?

Ahmed: We’re partnering with some Atlanta-area universities this year to produce some content, which I’m really excited about. We’re also bringing a digital technology symposium to A3C called "I Am Digital." In addition, we’re talking to some partners about building a great keynote series, a business academy, some film premieres, a hackathon, and of course, lots of great music.

I notice you have some really big names playing this year, in addition to the up-and-coming acts that you book. Do you see the younger artists being impacted by the ability to network with some of the people that have possibly been big influences for them?

White: Sure, meeting your heroes will always have a big impact on you for better or for worse – but you gotta remember that building a relationship with the person next to you during a Ghostface performance might be more beneficial to you in the long run.

Ahmed: As we grow bigger and bigger, it gives us room to make more opportunities for folks to network. There will be more mixers, meet-and-greets, brunches, etc. than we’ve ever had before this year. We also have a lot of cool opportunities for folks to get involved and create content on site, meet with influencers and executives, get studio time, etc. It’s important to us that even as we get big, we maintain our feel as a family affair – that means constantly looking for ways to make it worthwhile experience for everyone.

What have the more established acts been getting out of the festival by being a part of the community? Have they been enjoying helping the newer artists and participating in the panels and other events?

White: For a lot of the bigger names that have the opportunity to take everything in, it’s a way to reconnect with their fanbase, and I’ve had people tell me, "This is why I got into music in the first place."

Ahmed: Along with reconnecting with their fanbase, it’s also definitely a space where folks can become mentors to up-and-comers and meet up with people they’ve worked with in the past, but haven’t seen in many years. It all goes back to that family reunion idea that Tom talked about.

What are you looking for in the Sonicbids artists who submit their EPK? What is some advice you could give to an artist who really wants to get involved with this event and become a fixture in the community?

White: We're definitely looking for artists who are active in their career. Do you have a project with original material? Do you have visuals of your music and performances in your EPK? Are you actively performing? Word of mouth is another big one. You can Tweet the festival all day about how great you are, but when your fanbase does it instead, it’s 1000% (not a typo) more effective.