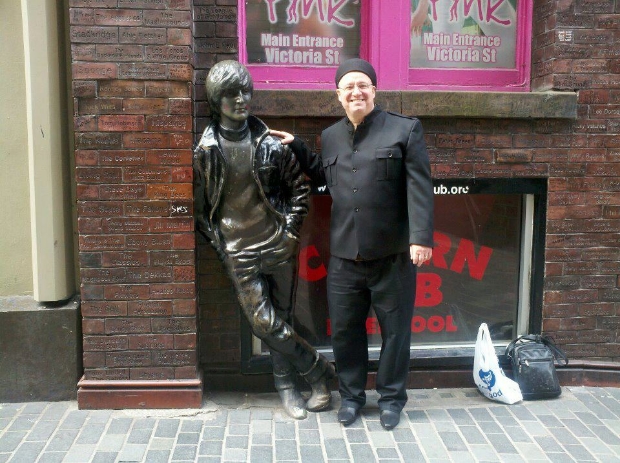 There is no other festival quite like the International Pop Overthrow. Devoted to pop music – which they describe as "primarily guitar-based, melody-driven rock 'n' roll music that is inspired by the spirit of the music that graced the radio waves in the 1960s and 1970s, but with a modern edge" – the festival was born to give every worthy band who'd like to play their music in a festival atmosphere the chance to do so. Originating in Los Angeles and now held in 16 cities around the world, IPO features between 14 and 140 of the most promising pop acts at iconic venues, and they're using Sonicbids to help book the slots.

We had the opportunity to chat with David Bash, founder and CEO of the International Pop Overthrow, about the inspiration behind the festival, why he uses Sonicbids for booking, and his advice for those considering a serious career in the music industry.

You have a background in psychology and journalism. How did you end up working in the music industry?

In the mid '90s I had been writing reviews for several pop music fanzines, which had been springing up like dandelions at the time. It was perfect timing, because although I enjoyed teaching, I was becoming burned out and also needed an outlet for journalistic expression, something I hadn't had since I was in journalism school.


What was the inspiration to start IPO? What’s the mission behind it?

Through my writing I got to know several great pop bands from all around the world, who, when they found out I was based in Los Angeles, expressed their desire to play here. That desire became the impetus for my starting the IPO festival in Los Angeles in 1998. The mission at the time was a bit more grandiloquent than it is now: Back then our goal was to get this kind of underground pop music, that which was greatly inspired by melody, as well as the sounds of the '60s and '70s, into the hearts and minds of the mainstream. That was a daunting task and one which, unfortunately, we have not yet been able to achieve, so I’ve streamlined the mission of IPO to bringing pop bands from all over the world to play under one umbrella (well, several now as IPO has expanded to many cities), in front of people who will "get" what they do, and on bills with like-minded bands. Happily, we have been able to do this for our 17th year now, and we're still going strong!

In 1998, I had no plans to do the festival beyond Los Angeles. I had been working with my brother Joel in a company he developed... and I was able to do my part out of my home, so I thought I'd be doing that full-time while doing the festival solely in Los Angeles. In 2001, we had a panel discussion before one of the IPO shows that year, and several of the bands stood up and said, "It's about time you take this festival on the road." I completely understood – some of them had been coming to Los Angeles each year from the other side of the country, and it was getting expensive! By that time I'd thought about taking IPO to other cities, but I had some trepidations about becoming that independent. Thanks to encouragement from some of the bands, and along with their help, I was able to set up IPO in New York in December of 2001. Fortunately, it was a big success, which gave me the impetus to bring it to other cities, including Chicago in 2002 and Liverpool, UK (at the world-famous Cavern Club!), in 2003. I can proudly say that IPO is still going strong in both of those cities, along with several others. This year, we are scheduled to do the festival in 16 different cities throughout the US, Canada, and the UK!


Why do you use Sonicbids in search of bands for the festival?

In 2003, [Sonicbids founder] Panos Panay approached me, told me about how Sonicbids worked, and asked if I would like to become a partner. I was very enthusiastic because I knew Sonicbids would open the festival up to a bunch of artists whom I wouldn't have otherwise known about. Over the years, of course, a bunch of other sources such as Myspace, Facebook, Bandcamp, etc.... have come about. But even with all that, Sonicbids has still been helpful because when we search through those other sources, we tend to narrow our genre to specific forms of pop. Sonicbids brings us artists who specialize in other forms, such as singer/songwriters, and some more on the commercial side of things (but still retaining the festival's ethos) that we wouldn't likely find in our searches. It's been of great help to us!

While IPO has featured well known acts such as Maroon 5, The Click Five, and Phantom Planet, you primarily feature unsigned bands. What is the experience like for these new bands?

I think there are three things IPO can offer bands that they can't get when they book their own shows. One is the opportunity to play on bills with all like-minded pop bands. Normally when bands book shows they are at the mercy of the venue, whose goal is often to bring in as many people as possible (and as many people as possible who drink a lot!). For the venue, usually this means having four or five bands with disparate music styles and, therefore, disparate audiences. So, it becomes a struggle to get quality gigs. At IPO, I try to book as many good pop artists as possible; sure, draw does matter at times, but mostly I just want to put on a quality festival featuring artists who do melodically-driven rock. I try to make our bills as cohesive as possible (e.g. psychedelic bands with other psychedelic bands), and I think those who play IPO are very appreciative of being on bills with like-minded artists. Often they end up meeting each other, and ultimately trading shows with each other, which I think is wonderful!

Secondly, when bands play IPO, they are playing in front of crowds who appreciate pop music. Again, when they play their standard shows, they may be in front of crowds who were there to see the country band who was on before them, or the metal band on after them, and that's often not a whole lot of fun for them. At IPO, they can be sure that, as long as they are good at what they do, the crowds will appreciate them.

The third thing is that the IPO experience is a family atmosphere, where bands feel as if they are part of something. I emcee all of our shows, and while I'm no Dick Clark, I introduce each band to the crowd, and my introduction lets the band know that I've heard their music, know what it's about, and really like it. I've had many bands tell me that my intro of them was the best they'd ever received, and I know they appreciate that. It's difficult to articulate the vibe of the festival, but when bands play it and they take in the experience, they realize they're part of something unique and special.

What is unique about the lineups at IPO?

They're almost all unsigned bands who do melodically-driven rock 'n' roll. You will never find that consistently at any other event, as most other events are either multi-genre, or specialize in genres which aren't pop-related. If you're into this kind of music, you can do no better than to come to an IPO show. I'm proud to say that our bands are among the best in the world who do this kind of music.


Any advice for people considering a career in the music industry?

The music industry, as I knew it to be in the late '90s when I started out, is all but gone. There are only a few major labels, and they only sign acts who they believe will sell a few million copies right out of the box. There are still some indie labels around, but most of them are run on a very tight budget and can't often afford to pay anyone a decent living wage, and of course the competition is beyond fierce to land a job at any label who can pay any sort of a reasonable salary. I would say that anyone who wants to get into this industry needs to find their own niche, as I have. Be creative, be driven, and don't let anyone convince you that you're going to fail. There are opportunities out there in the industry, but for the most part this means that you have to make your own opportunity. I feel blessed that I have been able to do so.

Submission deadlines for the International Pop Overthrow vary by city. Find out the deadline for your city here.