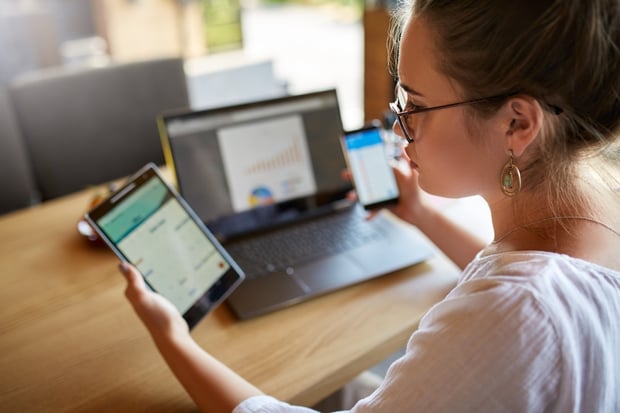 Do you ever make lists and then get immediately overwhelmed?

You either avoid your to-dos altogether or try to knock out three things at once, afraid you'll never see the end of the list if you don't. Or you glaze over and try to start only to end up adding more things to the list.

I became a mindset coach because I wanted to show the error of my ways and how I went from a workaholic, sleep-deprived stress ball to a confident, centered business owner. One of these lessons was to stop multitasking.

I was the queen of multitasking. I felt clever, like I somehow out-smarted the day by getting more done than I thought someone else could. I saw myself as a masterful juggler. Until it started to catch up to me. Here's what I learned from that time in my life and a few takeaways that could help you stop multi-tasking in your music career and, ultimately, get more done.

Why it's important to stop multitasking

1. Multitasking will always be counterproductive no matter how good you think you are.

This study, and many others like it, have concluded that "there are psychic costs to switching mindsets" that present themselves in the form of mental exhaustion. The study's findings were the focus of an article that was featured in The Huffington Post that explained why it's more productive to focus on one task rather than constantly switching mental gears.

You may not always feel exhausted, but it will catch up to you. I know all too well the feelings of accomplishment and pride once I knocked two or three things off my to-do list in one fell swoop. I thought people were crazy for not going full speed, and I felt amazing "out-smarting" some system.

But I will say this, since implementing a mono-tasking approach to my daily tasks, I sleep better, I have more energy for the things I love to do, and I stress less. Exhaustion, especially mental exhaustion, can present itself in many different forms. It doesn't just make you feel tired. It affects how your brain processes the day once you're asleep, how you handle stress, etc.

I completely understand the feeling that when I am working towards something I truly want, my health and well-being are usually the last things on my mind. As the saying goes, "I'll sleep when I'm dead."

Okay, well, you can certainly get there sooner that way. But I, too, was hardly ever dissuaded to change my ways by a simple threat of a head cold, or migraine, or even looking haggard and run down. "This head cold won't matter much once I get to where I'm going faster. It'll be worth it." That's what I always told myself.

For those who haven't yet learned to put their own health and well-being ahead of their career goals, use this as a lesson to mono-task: Your work suffers due to multitasking. Many scientific studies, such as this one, have found that more mistakes are made by workers and productivity decreases during multitasking sessions.

So, if you're a perfectionist, workaholic, or simply passionate about getting where you're going, keep in mind you want your work to shine!

How to stop multitasking

Switching from a non-stop, multitasking lifestyle to a more calm, mono-tasking approach isn't always easy. I still fall into the multitasking trap now and again. It's also difficult to trust in the method if you've never done it before. But here are some helpful tips to get you started.

Yes, while lists can feel overwhelming, it's best to get it all out on paper. We've previously created a three-step process for you to effectively creating a to-do list here.

If you leave everything open-ended, you don't have much motivation to work efficiently. Make due dates, link up with an accountability buddy (like many do when they want to lose weight and get to the gym), and set timers when you begin a task. This will help you in two ways:

3. Plan your day the night before

Things come up that we can't always anticipate, but it's important to have a game plan. Choose three tasks to complete tomorrow before you go to bed tonight. If you finish them all and still have more time, great! Choose the next task,. But starting with just three must-dos helps your day feel less overwhelming while still goal-oriented.

Finishing three things well is better than feeling like you have to tackle 20 and you get two done. Mix up the choices with something you dread but have to get done with some tasks that you love and that fulfill you.

Choosing which to do first is really a personal choice. I work better knowing I have my favorite things left to do as a reward. Others leave the awful tasks until later once they are motivated from completing the fun stuff. Either way, a plan can bring productivity, as well as peace of mind!

What are your thoughts on multitasking? What do you struggle with the most when trying to tackle your day? Let us know in the comments below, and maybe we can tackle it together!

Next up: How to Be a More Productive Musician Than You've Ever Been Before