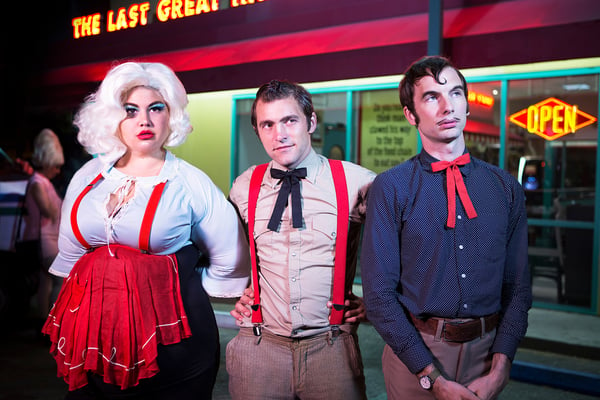 Life on the road can be a nightmare. The bummers commonly endured by touring bands are many: a perpetually whining member grating on everyone's nerves, the van breaks down in the middle of nowhere, or, even worse, your gear's stolen or a scheister promoter refuses to pay you. Horrifying? Yes – but things can get much, much scarier.

Shannon Shaw of the '50s-leaning, garage-rock outfit Shannon and the Clams has endured those aforementioned typical trip-ups – and then some. More than once, the Oakland-based musician has been frightened to the core by what she can only assume is paranormal activity. That's right: ghosts.

"I think some people are just more open or something," Shaw says. "But I don't want any of these experiences at all."

We've relayed bits and pieces of tour tales before, but none like this. It's almost Halloween, after all – prepare to be spooked!

Shaw tells us she's had a lot of these encounters; some even date back to her childhood. (That must have been extra horrible.) Despite repeated brushes with the supernatural, she's by no means desensitized. Shaw seems legitimately spooked by every tale she recounts.

The first time it happened on tour, she was in Sydney on a tour of Australia with Hunx and His Punx.

"I was having a hard time falling asleep, lots of tossing and turning. I finally hear my bedmate for the night, Jules, stirring. I heard her get into a drawer and open the bathroom door. Now, the room we're sharing is a lovely place [in Sydney] called the Medusa Inn. There's lots of Medusa-themed art, and everything is this gorgeous Turkish-bath green. Hearing that Jules was awake, I turn over again and wait for her to come out of the bathroom. From the bed, I can see the dresser to my left, the bathroom door about eight feet in front of me, and a breakfast nook that's curtained off with sheer drapes to its right. That's when I hear the little metal swinging handle on the dresser rattle like it's opening, and my eyes dart to see that's it's just swinging. No one touching it.

Then I see that Jules is asleep in bed next to me, not in the bathroom. I get so scared that I sit up in bed and start poking her to wake her up. I see the doorknob to the bathroom turn, and the door pushes open so fucking slowly, and no one is there. Then the curtains rustle and part a bit as though someone walked through them to the nook. Let's just say all the lights turned on, and I blasted some Aussie TV as loud as possible after that."

Shaw made sure to mention Seth Bogart (Hunx) had his own experience that night, and that it was even scarier than hers.

Another unfortunately unforgettable tour story of Shaw's involves an old Victorian house – her friend's place in Arcata, where Shannon and the Clams stayed about three years ago.

"I accidentally woke up really late. In fact, all night long I had been suffering from Old Hag syndrome, aka sleep paralysis. I kept feeling like something was waiting for me to fall asleep from a dark corner in the room or just watching me. I have had this syndrome since I was a little, tiny kid, so although I'm a seasoned veteran, it's not something you get used to.

So I didn't get good sleep and accidentally overslept. I woke up in a panic realizing how late it was, and jumped right in the shower. When I was done, I starting brushing my teeth and getting ready. I opened the bathroom door to let some steam out. The bathroom actually had two doors – one leading to a hallway that goes to my friend Courtney's room and the front porch, and the other door leads to the bedroom I slept in which leads to the kitchen.

I opened the door to the hallway to defog the mirror and was combing my hair when I heard a loud whisper in the hallway, right outside the bathroom door. Courtney was most likely talking to her husband and didn't want me to hear, so I kept getting ready. The whisper happened again, louder and closer. Seemed right at the open doorway. It did jar me and I thought to myself, 'Oh shit, Courtney is talking to me!' So I poked my head out and said, 'Hey, Courtney, what did you say?' There was no one there. That creeped me out a bit, but I decided it was nothing and kept combing. That's when the whisper was sooooo loud right in my ear that I felt the hair blow around and the heat of someone's breath. I jumped and looked and there was no one there.

So then I went stomping around the house demanding to know who was whispering at me. 'Courtney, where the fuck are you, why are you whispering at me?!' Her room was empty; I couldn't find her. The rest of the band was sitting by the van annoyed with my lateness. I asked them where Courtney was and explained that she kept whispering at me, and it creeped me out. They looked at each other and then one of them said, 'Uh, she's been gone for hours.'"

Shaw now wonders if the ghost may have been trying to send her a message.

"I got so scared. I ran back in the house, grabbed all my stuff, and was too afraid to go back in that hallway, so I took the route through the bedroom and kitchen. When I got to the kitchen, I saw that there was a candle left burning from the night before; it was melting off to the side toward a stack of papers that were against some curtains. I blew out the candle and instantly felt like a weight had been lifted off of me. I thought maybe, if it was a ghost, it was afraid the house was gonna burn down, so it scared me into using the other door to make me discover the burning candle. Who knows, though."

At this point, we're beginning to believe it's Shaw herself who is haunted. "That's my worst fear," she says. Fingers crossed that's not the case. Maybe she's a medium or something, and the ghosts are trying to help her realize her destiny. Or, you know, it could be possible she's just screwing with us. We kinda doubt it, though.

Got any scary tour stories of your own? Tell us your terrifying tale in the comments below!