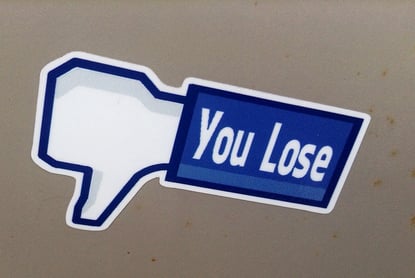 Pretty much anyone who calls themselves a musician uses Facebook in some form or another to promote their music. But the question is, do they really feel like they're making the most of the platform? For most, the answer is a resounding "no." The truth is, while Facebook is one of the most used social media platforms, it's also one of the least understood, especially from an artist's perspective, so let's go through some of the biggest mistakes and how to fix them.

1. Focusing on likes over engagement

This is probably the number-one mistake that everyone makes with Facebook, and not just musicians. Because the number of likes on a page is really tangible, and because it's a flashy number towards the top, we all tend to focus on it. But in reality, this number doesn’t mean much if the engagement isn't there.

So why is engagement so important? Facebook's EdgeRank algorithm basically filters all the content on Facebook to serve up only the most relevant posts to people. And what determines if it's relevant? Engagement. For example, every time someone engages with a post, they are more likely to see subsequent posts.

I would personally rather have a smaller following of fans who like and comment on my posts consistently than a huge following that never engages. Plus, by focusing on engagement, you'll end up getting more likes in the long run as your posts are exposed to more and more people. Whereas if you focus only on likes, you'll just have a big, useless number.

In terms of actually getting engagement, photos and videos get more likes, comments, and shares than plain text posts, too many promotional messages will turn fans off, direct questions can incentivize people to comment, and posting a statement followed by “like it you agree” can also work to drive likes. Even something as simple as responding to everyone who comments can drive up your engagement rates.

That being said, a lot of musicians will learn about some of these Facebook strategies, try them out for a day or two, and get discouraged and give up when they don't see immediate results. If you currently have an inactive audience, it will take time to build up your engagement, so stick with it.

On the same note, keeping the timing of your posts consistent is important too. Choose something realistic you can stick to – even just one post per day is plenty. Again, it will take time to build up engagement, but by sticking with a strategy and a schedule, you'll be much better off than if you intermittently post.

3. Posting at the wrong time

With Facebook's EdgeRank algorithm, you want your fans to see and engage with your posts, but if you're not posting at the right time, even your die-hard fans could miss your messages. You can actually see when your fans are online in Facebook Insights. Check it out and try to post around the peaks. For example, if your audience is mostly teens, you'll probably see that they're most active in the morning and evening when they're not in school. If your audience is working adults, you may have an additional peak around midday during their lunch break.

[Exactly What and When to Post on Social Media (Infographic)]

If you have an awesome community of fans on Facebook already, it can be tempting to use Facebook as your main base of operation. After all, it's super convenient and you can pretty much instantly reach all your fans to share news and stories. But keep in mind that all the traffic is owned by Facebook, not you. If Facebook were to lose popularity – as many social media platforms of the past have – you wouldn't have any way to connect with those fans.

With that in mind, use Facebook as a tool to drive your fans to engage with you further on your website and through your email list. Post links to your blog or trade songs for email address. Own your connections with your fans.

If you really want to powerdrive your online music promotion, you need to get all your social media channels working together with your website and your email list. In the Musician Powertools online music promotion course, you'll learn really easy but effective strategies to promote your music online so you can get more fans and sell more music. And, until September 15, you can get Musician Powertools for just $97. (That's a 50 percent discount off the usual price!)

If you'd like more strategies like these, you can download this music promotion guide for free. It will take you through some of the best strategies for indie musicians to help you grow your fanbase and your career.