This Psychologist Wants You to Stop Wasting Your Practice Time 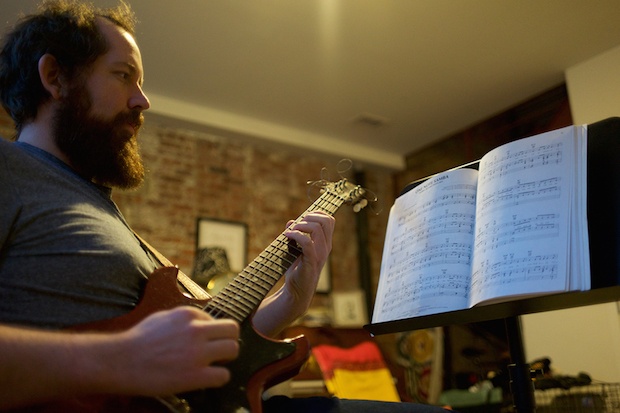 “Practice makes perfect” is a classic cliché – it contains elements of the truth but misses the whole story by a long shot. As musicians, we’ve all experienced times when we master a new concept in seconds, and other times when we’ve been working on the same song for years with seemingly no progress. What accounts for the difference?

If you’re anything like me, your practice routine is something you do intuitively. It often involves sitting down with your instrument, playing a few scales, banging around for 20 minutes on a few songs or improvs, maybe working on something specific for 10 minutes in a repetitive manner, and then bowing out. Basically, it’s casual, repetitive, and thoughtless.

The problem is that these tendencies are the exact opposite of what we should be doing if we want to see real improvement, according to Dr. Anders Ericsson. And we might be wise to listen. Dr. Ericsson is widely considered one of the foremost thinkers on the subject of “expertise.” His research is one of the primary sources that inspired Malcolm Gladwell’s now-famous “10,000 Hour Rule” – that it takes 10,000 hours of deliberate practice to be an expert in anything. But that rule, though memorable, is far from the whole story.

In his new book Peak: Secrets from the New Science of Expertise, which is excerpted here, Dr. Ericsson and his co-author Robert Pool argue that the best practice habits, what they call “purposeful practice,” involve specific goals, focus, feedback, and leaving your comfort zone.

Get specific with your practice goals

His first tip is to move away from vague goals of “getting better” to really specific, deliberate goals, such as playing the first page of Mozart’s Sonata three times in a row without a mistake. The key is, as Dr. Ericsson writes, to “take that general goal – get better – and turn it into something specific that you can work on with a realistic expectation of improvement.”

The problem is many of us don’t really think that way. My personal musical goal right now is to play piano like Errol Garner. How the heck do you start on that journey? Well, it begins with a process of breaking things down into smaller and smaller steps until you wind up with something that can be realistically accomplished in a practice session (or a few).

So starting with my big vision (Garner, I’m coming for you!), I know I’m going to have to work on my stride playing and block chords a bit. That’s still pretty vague, though, so I think I’ll start by trying to figure out the left hand part of “Stompin’ at the Savoy.” Suddenly, that’s totally something I can figure out in a few sessions and I’ll be a little bit closer to my overall goal.

Be focused while you practice

Often I find myself using practice to shut my mind off and escape my day-to-day concerns. Playing becomes meditative. And there’s absolutely no way I’m going to stop doing this — it’s part of why I play music. Back off, Ericsson!

But at the same time, it’s important to realize that this doesn’t really count as practice. As Dr. Ericsson writes, “You seldom improve much without giving the task your full attention.” If you’ve had a long day and your mind feels like it’s drizzling out of your ear lobe, then maybe that’s not the best time to try to focus intensely on a very difficult leap forward.

For me, one way to do this is to pick a certain amount of time and decide I’m going to do focused practice for that length of time. Even better if I have concrete goals laid out for that time, such as “play the left hand to ‘Stompin’ at the Savoy’ successfully six times in a row.” When the time limit is up, I can happily jam around on whatever I want and let my mind wander whither it will.

Make sure you're getting feedback

Here’s Dr. Ericsson again: “You have to know whether you are doing something right and, if not, how you’re going wrong.” The good news for us musicians is that practicing music has a built-in feedback mechanism — you can generally hear it when you play something wrong, even more so as you get better or if you record yourself playing. This is different from, say, learning a language in a vacuum where you would have no idea if your pronunciation was right or wrong.

There’s something else important to realize about this: You don’t necessarily need an expensive coach or trainer to give you feedback. Often, you provide yourself with the most important feedback. Here’s a great paragraph from Dr. Ericsson, referencing someone who was trying to learn how to memorize ever-longer strings of numbers:

“Perhaps the more important feedback was something that he did himself. He paid close attention to which aspects of a string of digits caused him problems. If he’d gotten the string wrong, he usually knew exactly why and which digits he had messed up on. Even if he got the string correct, he could report to me afterward which digits had given him trouble and which had been no problem. By recognizing where his weaknesses were, he could switch his focus appropriately and come up with new memorization techniques that would address those weaknesses.”

By paying close attention to your playing and constantly giving yourself feedback, you can focus in on the moments that give you the most trouble and work at those specifically.

One additional way to give yourself feedback might be to record yourself. If I record myself playing my Errol Garner tune, I can even compare it to the original, and make notes about the spots where I’m not quite getting it right!

Push yourself outside your comfort zone

Lots of times we think the best practice should feel easy, when the opposite is actually true. I remember this point coming up a lot in another useful rundown of effective practice techniques, the book Make It Stick: The Science of Successful Learning. The authors talk about “desirable difficulties” – basically, by practicing in such a way that feels difficult rather than easy, you facilitate more long-term learning.

Dr. Ericsson makes a similar point. Playing the same thing over and over again might feel good without ever really helping you improve at the parts that are giving you the most trouble or mastering how to approach a similar piece next time. This passage was particularly illustrative to me:

“This is a fundamental truth about any sort of practice: If you never push yourself beyond your comfort zone, you will never improve. The amateur pianist who took half a dozen years of lessons when he was a teenager but who for the past 30 years has been playing the same set of songs in exactly the same way over and over again may have accumulated 10,000 hours of ‘practice’ during that time, but he is no better at playing the piano than he was 30 years ago. Indeed, he’s probably gotten worse.”

That point hits home even more for self-guided learners like myself. As you’re practicing, try to focus in on things you’ve never done before. For me, that’s stride piano at a fast tempo. When you achieve one milestone, ask what’s next. By continuing to push yourself into new areas of exploration, you’ll continue to push your skills forward and make sure you’re actually improving the way you want to. Luckily, we have all sorts of online courses that might help you find new directions to push yourself.

Ian Temple is a pianist, entrepreneur, and professional musician. He started Soundfly to help people really find what gets them most excited musically and pursue it. He's toured all over the world with his experimental trio, Sontag Shogun. Check out his most recent course, Building Blocks of Piano, or follow him on Twitter @ianrtemple.