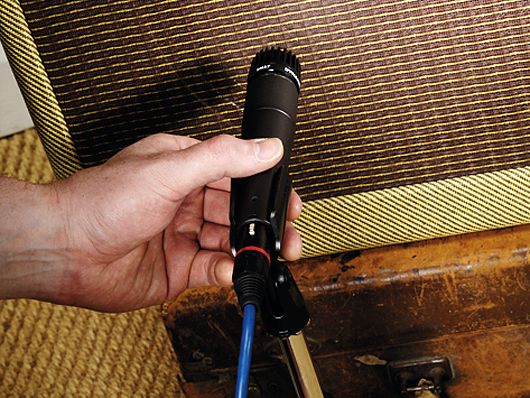 While perhaps not the most rewarding or necessary of mods that can be made to your home recording setup, this is an interesting one to start with as it's fairly simple, the gear involved is relatively cheap, and the mod consists of simplifying the design on something, as opposed to exchanging parts or adding to an existing design. I'm of course talking about the transformerless SM57 mod, or the "TapeOp" mod, as some refer to it (as this is where the first explicit version of this mod can be credited back to).

As many of you know (and if you don't, you've probably been living under a rock), the Shure SM57 may be the most prevalent mic in both recording and live sound. The old sort of adage goes that if you have an instrument and you don't know what to put on it, a 57 will probably get you by.

Despite the 57 having become many engineers' de facto go-to for guitars and snares and, to some extent, becoming a part of the "sound" of the instruments, it is by no means the pinnacle of instrument-microphone technology. Some people shun the "pinched" upper-mid-range character the 57 can sometimes bring to the table, especially when driven by certain sources. One way to potentially get around this is with the following mod.

What does the mod do?

This mod very simply removes the transformer that's wired in line between the capsule and the actual output of the microphone. The result is an extended low-end response, a reduction in the "pinch" that a 57 sometimes puts on a source, and improved transient response.

Now, it should also be noted that this mod is not necessarily designed to make your 57 "better"; its purpose is to change the characteristics of the mic to perhaps suit your needs. Sometimes the transient rounding of the transformer stage is a desired effect, and the reason you may be reaching for this mic in the first place, so if you're trying to make your mic "better," this is not the mod for you.

Side effects of this mod include a 10 to 12 dB drop in output volume, and allegedly, the mod makes the mic susceptible to damage from phantom power, though in practice it seems that this is more of a "potential in theory" for something to go wrong, rather than a guarantee. Nevertheless, keeping phantom power away from mics that don't need it is a good practice anyway.

How to do it

Onto the mod! This is an easy one to start with, as the SM57 has a very no-nonsense way of accessing the interior of the microphone.

And for those who are infinitely more visual: