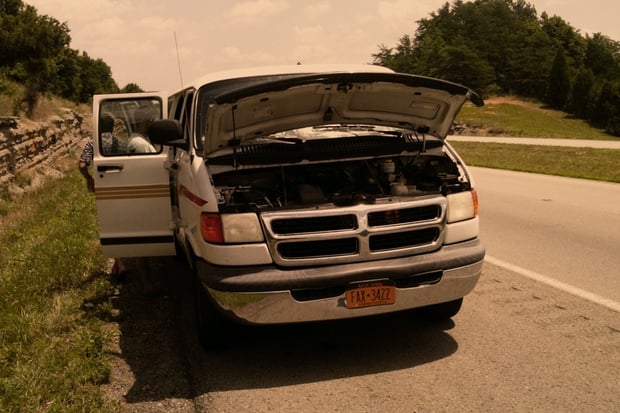 This last January, some very good friends of mine in the Arizona band Sundressed woke up in Salt Lake City to find their trailer stolen. It was later found, but all the gear was emptied, and they were out almost $10,000. On top of that, their tourmates, Papertowns., had their van break down in California and had to drop off for close to half of the tour.

I’m no stranger to van problems, and while I’ve never actually been robbed on tour, several of my friends have been. It sucks, but it has also made me contemplate just about every possible worst-case van scenario when it comes to touring, and I now feel that much more prepared. I don’t just up and go anymore. Here are a few, often overlooked, things to think about when getting your tour van road-ready.

The fine print in the rental and insurance papers

When Sundressed had all of their gear stolen along with their trailer, they had hope. They had purchased insurance on the trailer!

Turns out, despite an employee telling them otherwise, theft was not covered under the insurance. Their vocalist, Trevor, put it this way: "What I paid for was up to $5,000 in personal property insurance, which, in the fine print, turned out to only cover a collision or damage to the trailer, not theft. So while the insurance could have been valuable in a collision, it wasn’t valuable to us when the whole trailer was stolen."

U-Haul has not taken responsibility for their employee’s promise, and Sundressed never got all of their money back (although they did have a very successful GoFundMe campaign to help out with the financial loss).

Insurance contracts can be like this. Make sure you know the difference between personal injury and property damage and what each one covers. Select and negotiate your rental policy accordingly, and should anything happen to your gear, you’ll be prepared.

And keep in mind, your renters’ or homeowners’ insurance may cover theft of your possessions, even when the car insurance doesn’t. And pro tip: many credit cards insure items that you’ve charged to them (rental cars, gear, etc.). Before hitting the road, take a look through all your insurance policies… even the ones you didn’t realize you had!

Obviously, the basics are crucially important: Before hitting the road, take a look at your oil and tires. When is the van due for its next oil change, and what color is the oil? How old are the tires? Especially important, are you seasonally prepared (different steps are required for summer vs. winter)?

But have you looked into your vehicle’s history? There’s more to keeping a beater on the road than just oil. First of all, pay attention when buying a used car (here is a detailed list of what to look for). How many miles are on the vehicle? Are there enough seat belts for each person in your band? If you’re buying a vehicle out of state, will you be able to pass inspection in your home state (particularly important for states with strict emissions standards, like California)? Also – and this is especially important before buying a van – what kind of problems is your specific vehicle prone to?

I recently bought a car and, in doing so, turned down several cars because of frequent reports of transmission problems and other major issues that would make for costly repairs. All these considerations become even more important for a van you’re planning on touring long distances in that's also your personal vehicle, so be careful!

If you have room in the back of your van and you’re not making much money, then just don’t bring a trailer. A 5×8 trailer for a two-week tour would likely cost around $250. Maybe that’s not too bad between the four or five people in your band, but if you’re not making much money on tour, or are struggling to break even, a trailer is an unnecessary expense and liability. Beyond someone stealing it, trailers slow your vehicle down and wreak havoc on your gas mileage.

Save the money. It’s $250 that could be saved or better spent on food, gas, emergency places to stay, or world-famous hot dogs. And as a side note, many tours involve overnight driving, and an unnecessary trailer makes an already dangerous situation more dangerous.

If you must bring a trailer: "parking hacks" and what to store in it

Whether you’re staying at a friend or show-goer’s house, a hotel, or somewhere else, use parking to your advantage! Park the back of that trailer right up against a wall, or even another car, so that nobody can open the back door. Walls are your best friend. Do everything you can to make it difficult for someone to break in and take things unnoticed.

Here’s another theft-protection hack: drape noise-making objects inside the trailer door – chains or metal chimes – so that if anyone tampers with it in the night, you’ll hear them.

I’ve had bands bring some of their gear into my house before as well, which is smart. Keeping gear or guitars indoors just in case minimizes the risks in a big way. After loading up the car post-show, unpacking it again might seem like the last thing you want to do, but when you’re in an unfamiliar town, it’s often the right choice.

I honestly don’t know why more people aren’t doing this. Getting a mobile GPS tracker that can be placed (or hidden) inside of a van or trailer is becoming a worthwhile investment with the amount of vehicles and gear being stolen nowadays. Essentially, these devices allow you to track where your vehicle is just by syncing them once with your cell phone. And you can program them to send you alerts or call you should the device be removed from the spot you hid it in. It worked for Zane Williams, and I’m sure it could save a lot of time and money in the future if you’re the victim of a robbery.

These are really simple and basic ways to keep your van safe. If this article has sparked any ideas for worst-case scenarios I haven’t thought of yet, share your fears and advice, and I’ll include them in a follow-up article! Let me know on Twitter @robolitious, in the Touring on a Shoestring Facebook group, or in the comment section below.

Next up: Should You Buy or Rent a Band Van? A Look at the Cost Breakdown