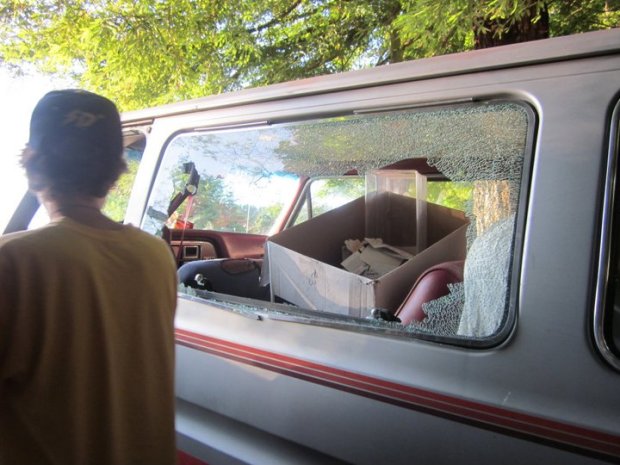 Every band I know that's been on a DIY tour has some crazy story about a show, a drive, or a place they stayed where things went awry, and they had to quickly figure a way out of it before they got themselves hurt. I've definitely had my own share of van breakdowns, sketchy houses and venues, and encounters with crazy, sometimes dangerous people on the road. I'm still learning about how to avoid those situations altogether, but here are four tips I've received from other bands and lessons my own personal experience has taught me about avoiding disasters while on tour.

1. Never tour outside of your means

The number-one rule of being a touring band that no one's ever heard is prepare to not make any money. Imagine you'll pay every penny out of pocket. It's always wise to ask about money and try to make back what you spent on gas. But it's not uncommon to hear of a promoter canceling a show once you're already on tour or not paying you what they originally promised.

[Lesson Learned: I Got Ripped Off By a Venue]

Budget out how much you think you'll need for the tour – estimate gas costs to be high and give yourself a food budget – and then some for random happenstances. On my first tour, we broke a window on our van and had to get it replaced, and all that money came out of our own pockets. Speaking of van problems, AAA is not a bad idea. You don't want to have to drop a ton of extra dollars on a tow truck you have to wait several hours for.

2. Have a back-up excuse

For those who don't know, the typical, younger DIY touring band couch surfs in new cities – usually with someone they've never met before the show. Of course, this can be risky. You should always go into a situation that could be sticky with a prearranged excuse that any band member can invoke if he or she feels unsafe.

Two bands come to mind on this subject – we'll call them Band A and Band B. Band A had a back-up excuse agreed upon beforehand that they would use if they got to a place and the situation looked unsafe or they didn't want to stay there. Band B didn't have a backup excuse. After a show on an early tour date, they were offered lodging by a young kid whose mother originally had no idea they would be staying over. To make matters worse, there was a revolving door of drugged-out strangers and a "guest bedroom" in which the older brother of the family lived, who shamelessly informed them of the previous night's… er, adult escapades. Band B had to sneak out and left the house at 5:00 a.m.

[If you're going to couch surf, remember to keep these important etiquette tips in mind.]

3. Check out the place you're playing beforehand whenever possible

My band had a show canceled on us in Flagstaff two weeks before leaving for our tour last month. We found a new promoter who had been recommended to us by a trusted source. He was able to find us a show in a small town about an hour north of Flagstaff in a venue he'd never been to. He was great, but we learned a valuable lesson: make sure said person helping you out has been to the venue before you play there.

The venue ended up being a small, one-room building with no actual address that slowly filled up with intoxicated crust punks through the night. As much as I love house shows, the amount of drug use was a little unsettling. It became especially scary when the promoter informed us, upon learning some things, that we needed to settle at a gas station nearby because he had heard "it starts getting violent around this time." Apparently, he was also filtering drug paraphernalia out of our donation box as well. This taught us that wherever we play from now on, it should be a place previously visited by a trusted source. While this promoter was trustworthy, we could have avoided a sketchy situation had he visited beforehand.

[Here's how to deal with a bad venue situation.]

4. Prepare for the worst

Always take a toolbox and a first aid kit, and an extra can of gas is not a bad plan either. I always take an extra guitar and amp in case my normal equipment happens to stop working (which it did on our last tour). We always keep a 24-pack of bottled water (even if you bring water bottles, be prepared for not being able to fill them) and a bunch of snacks: trail mix, random fruit, granola – anything you can get in bulk from a grocery store.

An article I read recently recommended gear-track.com in the case of anything being stolen. GearTrack allows you to register your musical equipment online, complete with pictures, model and serial number, descriptions, and specs. You can enter theft details if it happens to get stolen. With more and more bands having their gear stolen, the necessity for sites like GearTrack has become greater.

And of course, when your place to stay falls through, it's good to know your alternative options. It's always wise to have a travel app ready if you decide a hotel is your best option. Personally, I prefer hipmunk.com, which is similar to other sites in that it provides information about ratings and prices but is set up in a way I find easier to use. However, I (and many people I know) typically prefer to save money and sleep in the van. If that's you, find your nearest truck stop and snuggle up.

Staying on your feet and preparing for possible disasters will make your tour more enjoyable when things inevitably don't go as planned. What are your tour nightmares? I'd love to hear them and learn from them! Hit me up on Twitter @robolitious or leave a comment below.