What No One Tells You About Booking Gigs in Nashville 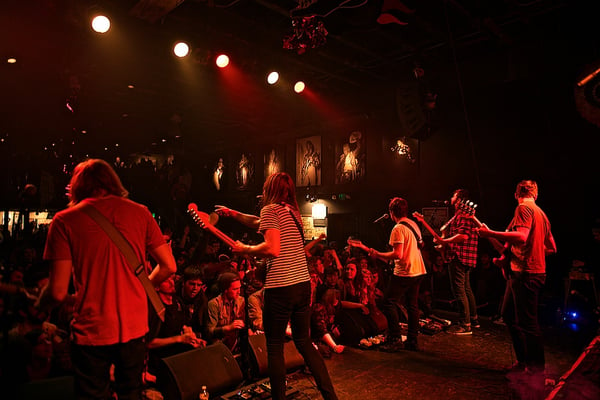 The superabundance of musicians and clubs in Nashville make for a double-edged sword. It's why the community thrives—but also why it's harder to break into.

We spoke with two staple players in the city's market. One is Alanna Quinn-Broadus, who works with The Basement, which is situated beneath Grimey's New & Preloved Music. The venue is run by its co-owner, Mike Grimes, and his business partner, Dave Brown, but Quinn-Broadus heads up their social media and digital marketing. Our other industry insider who provided insihgt on the Nashville scene is Jesse Baker, who's been the programming director at the long-running historic club Exit/In for four years now.

Whether you're a touring through or starting out locally, the tips they've given below will help you crack the code to booking within the Nashville circuit.

What venues in Nashville are best for up-and-coming independent bands?

Quinn-Broadus, Basement: It seems these days you can find the next big thing pretty much anywhere in Nashville, but you are usually guaranteed an impressive first encounter with an artist/band at The Basement (if I may say so) or The 5 Spot.

Baker, Exit/In: Not to sound biased, but we're pretty good. [Laughs] If you're looking for less than a 500 cap, I would talk The End, The High Watt, The Basement, and The Stone Fox.

What's the best way for a touring band to get their first gig in Nashville booked?

Quinn-Broadus, Basement: First of all, be realistic. If it's your first time playing a new market and you know that you can't bring too many people out, don't shoot for that 400-cap venue. Do your research. Book a small room, find some locals, and have a couple dates in mind to present to the talent buyer/booking contact. Facebook messaging a venue saying you're 'an out-of-town band looking to play in November' gets you nowhere. Be prepared! You are not the only band looking to book a show.

What factors do you consider when booking a local band?

Quinn-Broadus, Basement: First of all, being well rehearsed with good songs and good recordings never hurts, but when booking a local act that we're not familiar with, their approach/pitch for the show can really help determine whether we take the show or not. Having at least one other reputable band on the build goes a long way as well as being active on social media, and past play history in town. Additionally, in a town like Nashville, word of mouth can play a huge part in booking, so always be on time, hard working, and easy to work with.

What about for touring bands? Same standards?

Quinn-Broadus, Basement: Of course! Booking an unknown, out-of-town act is always a gamble, but we are always excited to be blown away by someone we've never seen before. We want to see it. Just be proactive. If you're coming to a new town, ask for a press list, make tour posters, do the work. If you come through and have shown absolutely no effort to promote your appearance, you're most likely not going to get a second chance to come back with us.

Baker, Exit/In: There's always the sake of liking the bands and believing in their ability to grow in the market and become something viable. Maybe you lose money on a couple...then it turns around and balances out. I think it's about believing in the project and believing that there's something that you can do with it to make it draw numbers.

What would you suggest for a super-new local band that's not ready for even a 500-and-under venue? What's the ground-floor starting point in Nashville?

Any suggestions for an out-of-town act regarding getting touch with the right local band?

Baker, Exit/In: The opinions of the promoters and venue contacts are always pretty viable when it comes to that kind of thing. Normally somebody's probably not going to take your show unless they feel like they can have a hand in making it successful. You just have to be able to work with them on it.

What's the one biggest thing you want independent bands to understand about booking gigs in Nashville?

Baker, Exit/In: If you're an up-and-coming band or even a moderately successful regionally touring band, local support is very important here. The market is extremely saturated, so it's nice to have somebody on the ground with their finger on the pulse of everything. Even the best promoter in town is going to have a hard time connecting people with the music discovery aspect these days if they're not widely known yet. So it's always helps to try and have local support...that kind of caters to a similar demographic.

Quinn-Broadus, Basement: Nashville has seen a massive increase in tour traffic over the past few years, and while there are plenty of places to play, we are far outnumbered by artists looking for shows. Be persistent. If you don't hear back from us immediately, try again. Don't be discouraged, and don't rely on the locals to make the show happen. If this is your dream, treat it as such. If you can make a good show happen at one of our clubs, we will remember and you will always be welcomed back!

Click here for more tips on the Nashville music scene, or search for Nashville venues currently looking to book bands!