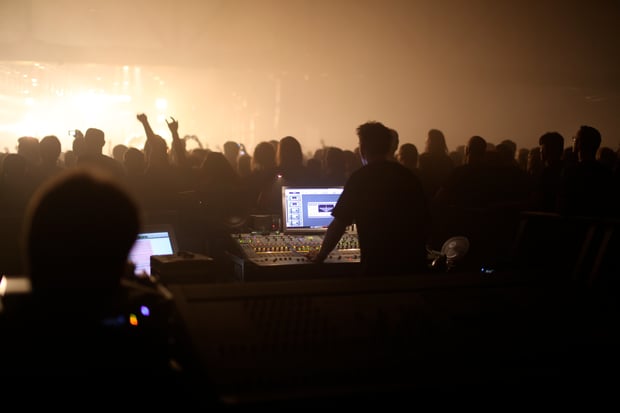 Photo by Ville Hyvönen via Wikimedia Commons / CC BY 2.0

One of the many wild cards at any live show is the person behind the board, and those techs have a bigger impact on your actual performance than just about anyone else outside of your band. Club owners can stiff you on pay. Fans can fail to show up or turn out in throngs. But the sound tech controls what you actually sound like, whether you can transmit your ideas and emotions to a live crowd. This calls for quickly making friends with the pros running your sound and communicating your needs and wants in a way that's clear and professional.

Jason Arteaga is one of those pros. He went out to Los Angeles in 1998 with a degree from the Conservatory of the Recording Arts and Sciences, looking to turn his passion for music into a career in the business. When he got to the city, he was sleeping on a friend’s floor, hanging around studios as a volunteer. Since then, he’s worked on a Grammy-winning live album by Taj Mahal, engineered live sound for artists from Ry Cooder to Mariah Carey, and traveled all over the planet making music sound perfect. You’d be lucky to see this guy mixing you at your next show, but we were able to catch up with him between live gigs and studio sessions for his own passion project. We asked him how bands can get the most from their live sound and the person running it. Get your notebooks ready, because he has a lot of tips.

1. Be a pro by just being nice

Sound techs deal with a lot of divas, bad egos, and incompetent bands. Make yourself stand out by being upbeat, cheerful, polite, and appreciative.

"Say please and thank you, no matter how the sound guy or girl is acting," Arteaga advises. "And a tip goes a long way. It can make a huge difference to whether the sound person pays attention to you or dozes off during your set. We like drinks most of the time, too, but always ask first. Bribery is a good tactic."

And of course, don’t show up your sound tech if things aren’t going perfectly. Never complain about the sound or the venue over the mic, and don’t ask the audience how your band sounds. "Most of us have people barking orders at us, but no one says anything if it sounds good," adds Arteaga.

2. Have your sound together onstage

Getting your stage volumes correct without trying to correct things in the monitors will make everything so much easier for everyone. Soundcheck without sound to make sure you can all hear each other. If you can’t, move your amps and change your volume settings until things are well-balanced.

Monitor speakers are not headphones; they play a supporting role to what you can already hear onstage and should be used to add only what you need. "Know how many people will be onstage, whether they will be singing, and where they’ll be standing," says our sound wizard. Audiences love surprises. Technicians don’t. When your beloved former bass player makes a dramatic entrance for the encore, your sound person should know he’s coming and can have his microphone and instrument ready to go.

Know your terms when it comes to effects. Tell your tech, "I like a nice hall reverb with a 20-millisecond delay." Don’t tell your tech, "I like my vocals to sound like Rage Against the Machine, live at Rhode Island Ice Arena, ’97." Make things easy to understand and execute, not vague or wishy-washy.

Want to bring your own microphone? "Get a Shure SM58, Shure Beta 58, or a Telefunken M80," says Arteaga. Those mics are industry standard, and sound techs know what to expect when working with them. If you have an acoustic instrument onstage, put a tuner in line to mute the signal when it’s not in use. This way the tech doesn’t have to worry about riding the channel to avoid feedback. "Never unplug from a DI box unless the sound tech is muted," Arteaga says. "And know what a DI box is."

4. Give your tech a setlist, with notes

Doing this will help you have your own act together and will let the tech know what to expect on each song. Add helpful hints when appropriate. For example, "We need a third vocal mic on song five." Let your tech know anything that might be helpful. If your set ends with you putting your guitars down and getting a minute or two of dramatic feedback, you don’t want your tech killing the signal at that moment.

5. Be reasonable with special requests, and be flexible

"Please know you can only ask for so much, and try to keep it to a minimum," Arteaga advises. You may be using some house gear, and the venue may not want things moved around too much. No matter what, this place won’t sound exactly like your practice space or the bar where you have a house gig every Thursday, so be open-minded. If things aren’t perfect after a couple of songs, just deal with it and play your set, unless it’s so bad that you can’t. Playing with wildly different or less-than-ideal sound is actually great training for your band. You’ll know you’ve mastered your set if you can make it through a gig when you can barely hear your own vocal over the drums, or a key instrument is light in the mix.

Ideally, your sound tech should have as much fun mixing your band as you have playing. If this is the case, then everyone in the room will enjoy the show, even if the sound doesn’t achieve perfection. Remember, your sound tech may never have heard you before and is making this happen on the fly. Our sound guy offers one final nugget of advice: "If you have a left-handed drummer who sings, get a right-handed one who doesn’t." Words to live by.