What's the Difference Between Entertainment and True Art? 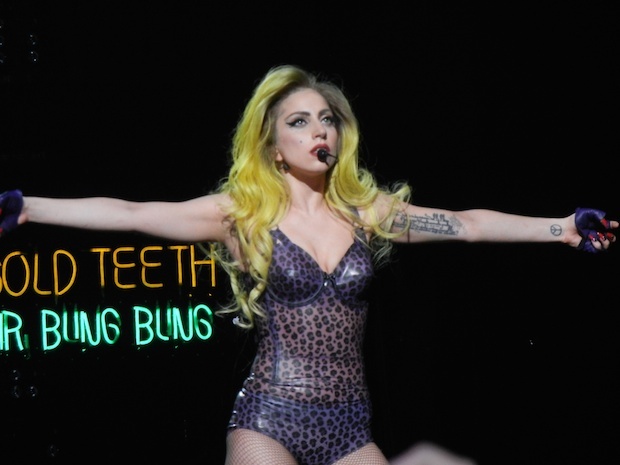 Lady Gaga recently talked about being used as a "money-making machine" in today's industry at the Yale Center for Emotional Intelligence, and hinted at hopes of branching out of the music world. She has previously discussed the challenges of creating art out of passion while simultaneously being expected to make money for those surrounding her. Gaga's transformation from "Poker Face" to her lead role in American Horror Story: Hotel has some fans confused, while others applaud her newfound prowess.

While this situation is not unusual, it begs to answer the question of art versus entertainment. At what point in navigating the music business world does a creator get lost in translation, having to consistently make art that's commercially viable and true to his or her identity? Are intention and motivation what inspire the differences between being a true artist and being just a public figure? We'll examine these questions and more below.

Elbert Hubbard says that "art is not a thing; it is a way." I love this quote because it showcases the process over the product. As musicians, creators of uninhibited art, our mentality and passion is everything. The artistic process starts in your head and in your heart, and what you create after is just a replica of what you feel and what you see. To be a true artist, your creative process music must be born out of a craving desire to express yourself, a need to take something from within and mold it into something that can be felt and understood by anyone.

Artist Paul Knee stated it best when he said, "Art does not reproduce what is visible; it makes things visible."

How does art differ from entertainment?

When aesthetic purpose precedes exposure and sales considerations, art wins over entertainment. It starts with artistic intention and results in audience response. Entertainment is more about artifice, whereas art has a stronghold in substance. At an International Arts Movement, Makoto Fujimura brilliantly stated the following:

"Entertainment gives you a predictable pleasure. Art… leads to transformation. It awakens you, rather than just satisfying a craving."

The problem with musicians who find themselves pressured to create music that sells is that the music itself increasingly becomes less of an art form. Certain genres of music have become almost formulaic because writers are forced to follow stock templates of what's expected to happen where (i.e., the first chorus coming in 20 seconds in). The art is driven first by the desire to please a consumer base. When marketing drives the production of music, the resulting outcome is music that lacks meaning. The issue is that entertainment leaves us relatively unchanged because it doesn’t ask anything from us except our fleeting attention. Alternatively, art forces you to make a choice, to examine your life and sometimes life itself, and to be vulnerable and exposed to real feelings.

While there are notable differences between Picasso and Kendrick Lamar, the attribute they share is that their art taps into the emotions of their audiences. Entertainers primarily focus on creating a fantasy, while artists take on the role of depicting reality and mirroring the human condition.

I'll never forget seeing James Blake live at the House of Blues in Boston. The stage setup was simple: MIDI keyboards, vocal pedals, and lighting. There were no dancers, no crazy outfits, just a man on a bench who had a story to tell. He was unaffected by the transformation some artists undergo when they become entertainers, feeling they have to put on a show full of flashy production.

While I believe that it's possible to overcome this dilemma as a musician, as you become more of a public figure, it's indisputably challenging to do so consistently. You have to be able to deliver compelling material that translates across widely varied audiences and meet the demands of those surrounding you. Gaga mentioned her frustration with being seen as a public figure first and artist second, and how her presence became more important than her product as her career developed.

From an audience perspective

Lady Gaga briefly talked about how we live in a digital age where our communication is hindered and everything is expected to be delivered immediately. With streaming platforms and social media outlets like Snapchat, having instantaneous access to everything has driven attention spans to an all-time low. It's unfortunate that we live in a radio-edit generation, where if a song exceeds four minutes, it loses people's interest. The majority of listeners who call themselves fans of artists only know lyrics to top singles and don't take the time to listen through entire albums.

We need a shift from being consumers to wanting to be consumed. A few years ago, as Beyoncé performed "Irreplaceable" in front of a full house at Atlanta’s Gwinnett Center, she called out a fan for filming her using their phone saying, "See? You can't even sing because you’re too busy taping. I'm right in your face, baby, you gotta seize this moment, baby. Put that damn camera down!" We, as a collective of consumers of music, need to better appreciate the art form.

Entertainment just requires passive receivers, whereas art demands purposeful action that awakens your soul. Beyoncé is an example of an artist who may have experienced difficulties balancing entertainment with artistry. I'm not against entertainment, but I have deeper respect for artists who don't neglect true art as entertainment. Beyoncé could silence any stadium with an acoustic version of "Halo," yet her live appearances consist of provocative attire, heavily produced arrangements, and overtly sexual backup dancers. She focuses on selling a fantasy rather than showcasing her finesse.

Lady Gaga says it was important for her to learn to say no (e.g., to taking fan selfies and creating fragrances for marketing). Sia never wanted to be an entertainer, and she still refuses to perform with her face exposed. Adele is choosing not to stream her latest album, 25. Sam Smith had six hit singles from a single album (In the Lonely Hour), proving that you can create somber music that sells, born out of a burning desire to share a feeling with the world.

Although artists like Taylor Swift, Thom Yorke, David Lowery, Beck, and even Pink Floyd have blasted streaming services like Spotify and Pandora for shareholders' profits, artists' percentages, and paid advertising content, I think there's a bigger issue at hand. Not only does the model itself need to be improved (like Jay-Z attempted with Tidal) so that artists don't feel like royalty checks from streaming services are effectively severance pay, there needs to be a widespread appetite for true art and genuine artists.

If you value music as an art form, it's important to take further action. It starts with respecting the integrity musicians hold as true artists. True artists embed meaning within their work, and their followers should invest in supporting their ambitions. Remember that all artists are entertainers, but not all entertainers are artists. It's difficult for artists to be discovered and thrive amidst an industry congested with a surplus of entertainers, so it's up to listeners to open the gateways for true art to give it a platform to speak.