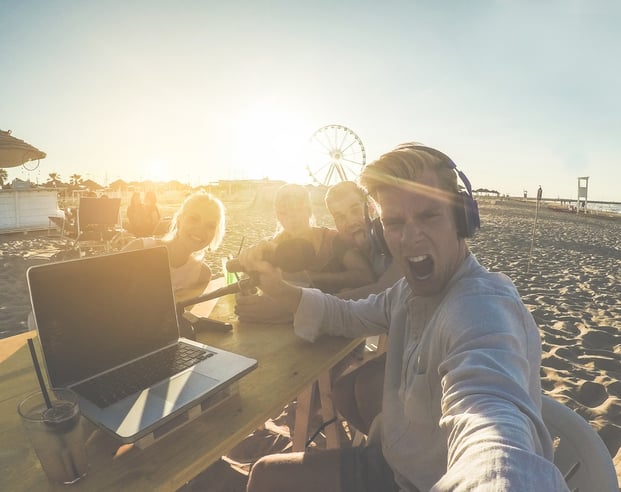 As industry experts tout the benefits of live streaming, the medium is charging up interest and success for many artists. Musicians are now spending hours not just in front of the crowd, but also in front of a camera, broadcasting to the internet. Are these wasted or well-spent hours? Is this just another way to throw free content online, or can artists use it to make money and gain fans? Let's test the water and see whether live streaming can work for you.

If someone proposed that you should post a concert, rehearsal session, or just a feed of you online, possibly for free, you might wonder how producing and giving away more material could possibly help. By attracting people to you as a person, you're creating new fans of your music, and by demonstrating what you can do in the live environment, it can lead to more ticket sales.

Music expert Cortney Harding wrote on Hypebot that live streams of concerts are a great way to draw in a bigger audience. Fans love to sit at their computer or in front of their television to watch live performances, but at some point they'll want to trade up and actually feel the live experience. Live streaming is your opportunity to prove that you're a great musician to the undecided.

Harding also emphasizes how live streams are a great way to involve people who can't attend your show – people who queued but couldn't get tickets, people who can't leave their homes, people who have to look after kids, etc. will all be willing to drop a few bucks in order to see the show online. Thus, you can increase the value and audience of a single show without cutting into your live audience.

If you're worried about streams stealing your live fans, there are tools that can help. Geofencing, according to ThunderTix, lets you make a live stream available only to the people who are too far away to go and see it anyway.

What are the options?

If you're new to streaming and don't have an established audience, all the modern artist needs these days is a webcam, a microphone, and a plugin like Hangouts on Air from Google. If you're a bedroom producer, you don't even need a quality mic, as you can stream your computer or mixer's audio output. If you're part of an indie band, however, you'll probably want to connect a higher quality microphone to your laptop to live stream.

If your stream takes off or you're sure that it's worth investing in it, you'll likely benefit from a dedicated streaming service, of which there are many different competitors. Ustream is one of the most popular ones. Anyone can use the system for free, but if you want to really boost your audience, Ustream offers pro plans starting at $99 – this means no ads, loads of online storage, and thousands of viewer hours.

With Meerkat, starting a live stream is almost as easy as sending a tweet. Start streaming with the app, and your broadcast will appear in your Twitter followers' feeds, and they'll receive a push notification. With a tool like this, you can combine the immediacy and flexibility of social media and push notifications with the power of live video. (Sorry Androiders, it's iOS only, for now.)

Periscope is Twitter's recent answer to Meerkat – there are some cool features that set this app apart, and an Android version is to follow soon. During a stream, viewers can send "hearts" to streamers which are visible onscreen. You can also see who has sent you the most hearts, which is a great feature for network-building, allowing you to identify the people who'll like and share your content if you call them out. You also get a bit more control, as Periscope allows you to choose whether your stream gets posted to Twitter.

[Live Streaming for Musicians: Which is Better, Periscope or Meerkat?]

Electronic DJ Deadmau5 is, at least from where I'm standing, the king of live streaming. He's been at it for years on multiple platforms, and as a result, has an almost unrivaled connection with fans online. If you tune into his streams on live.deadmau5.com or on Twitch, where he has 29,660 followers, you'll see him composing, joking around, and playing with his large and expensive musical toys.

Deadmau5's main hub is live.deadmau5.com. Free users can access some video, audio, and streams, but for $4.99, they can get access to the whole shebang, including all the live streams.

As I’m sure you've guessed, Deadmau5 isn't just posting polished performances or behind-the-scenes footage. When you tune in, expect pauses, breaks, and jokes – content specifically for Deadmau5 fans. This is one of the benefits of live streaming – given that there's more of it, you have more of a chance to experiment with what works for your fans, and refine it to create an experience they really love.

Deadmau5's stream actually lead to a moment that's now inscribed in dance music mythology. During a long live streaming session while producing the track "The Veldt," Chris James, an obscure vocalist at the time, created new vocals for the piece, edited them with the track in its current form, and tweeted them to Deadmau5.

Thus, Deadmau5's stream brought him new vocals, which involved and continues to involve the whole community in the process of making songs. This sort of relationship is fundamental to success in the modern music industry: your fans are the people who will propel you to success, so keep them inside the tent and well looked-after, and they'll love you for it.

What should I do?

In this industry, and with technology in this form, you should definitely live stream in some capacity. If you're worried that people won't have time to watch your stuff, don't: the average American watched 19 hours of video in December 2013, according to ComScore.

Don't go trying to be Deadmau5, though. Each style and musical identity demands a specific sort of live stream. For example, if your output is primarily short form, highly produced, three-minute tracks, a long, rambling stream stretching into several hours probably won't fit. Maybe try something around 30 minutes long and highly structured.

Deadmau5's stream is successful, in part, because it's an interpolation of his existing musical personality – long, quirky, and funny. Think about what makes your music original, and build your stream around it. Live jam sessions, production marathons, intimate live gigs, Q&As – the possibilities are as wide as online video, and that's pretty wide.

In my opinion, for the vast majority of artists, it's not a case of whether you should start streaming, but when. This music industry runs on connectivity and communication, and a real-time, two-way, high-definition musical conversation with your fans is too valuable to leave out.

Oliver Cox is a contributing writer for SplashFlood, a music promotion app. He writes freelance for a number of sites and brands, specializing in music. Coming from a musical family, Oliver loves to combine his interest in music with writing to explore how the modern musician can find success.