Why Every Songwriter Should Have a Hookbook 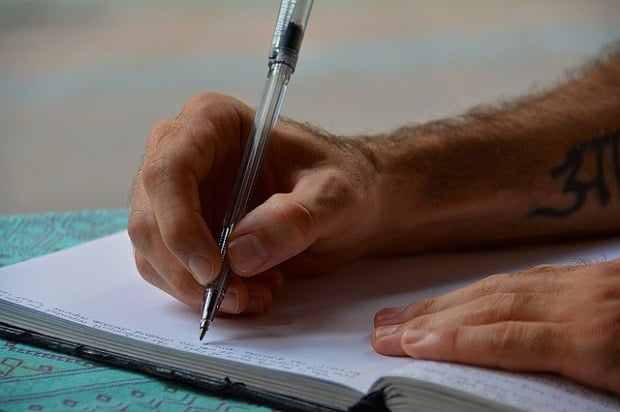 If you've been creative for any length of time, you've noticed that things tend to ebb and flow. You can have an incredibly productive month (or two, or three) and then be tapped out for ideas for a little while. It happens to everybody. Pro writers are able to sidestep that issue by having something called a “hookbook.” A hook is nothing more than an idea – usually a song title, but it could be a guitar lick or melody line. Here's what you need to know about starting your very own hookbook.

Most of us have ideas come to us from time to time – when we sleep, when we're driving, in the shower, whenever. The key is to jot down the ideas before they fly out of your head. You might not have the time to write them right then and there, but if you can get them down in some way, you can come back to them. If you do this enough, you'll have a huge pool to draw from when your well is dry – you never have to stop writing for lack of ideas!

2. Assemble some tools of the trade

Almost anything can be a hookbook – I know writers who use the old-school pen and notepad. Some even have cool-looking journals or notebooks from bookstores. Some people have portable recorders (or use their phones) to mumble lyrics or melodies into. Or get an app on your phone to jot down all your ideas.

It doesn't matter what it is – it's just got to be easy to use for you and available 24/7. That means if you're asleep in bed, it's gotta be easy for you to roll over and use it. If you're half asleep, you're not gonna want to go hunting around for a pen or wander the kitchen looking for your phone (or notebook). And if you fall back to sleep, you're gonna forget that great idea by morning – I guarantee it.

Assuming you're now keeping a running log of all your ideas (and backing it up!), you're already on the road to success. But if you want to go one step further, you should consider organizing your titles and ideas by genre or type of song.

For instance, a title like “All Alone and Lonely” is not going to be an uptempo. Certain melodies can lend themselves to pop, rock, or country as well. Things like that should be fairly obvious, especially if you're a seasoned writer. So the next time you're in a writing session, when you're trying to right an uptempo party song, you know exactly which part of your hookbook to turn to.

If you're in any way serious about your art, a hookbook is practically mandatory. This guarantees you have at least something to throw out during co-writing sessions, something to inspire yourself with during solo writes, and a large pool of ideas to draw from in general. Start one today, and make recording your ideas a habit. It will pay dividends down the road.

Next up: How to Write Songs That Get Stuck in People's Heads