5 Creative Ways to Keep the Buzz Going After Your Show 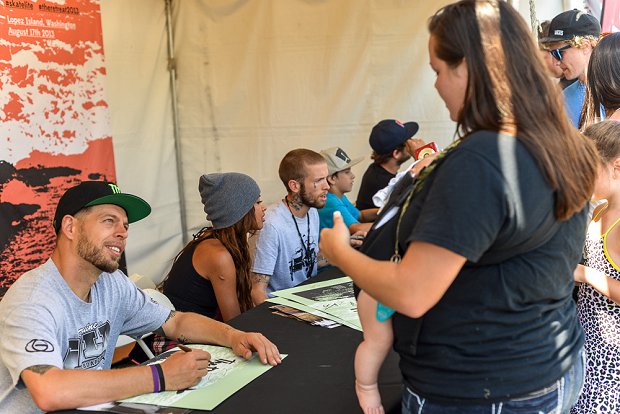 In my last post, I discussed five creative ways to build buzz before a show. For this edition, we're focusing on ways to maintain momentum after a gig.

Any music fan knows about the high you get after seeing a killer show. That feeling makes you want to listen to the band even more, purchase merchandise, and vow to see them perform again. Artists shouldn't let these moments pass them by, as this is one of the best opportunities to connect with your fans (new and seasoned) face to face.

No matter the size of your following, take time to meet fans after each show. For you as an artist, it's a great way to connect with and get to know who your fans are, and for the fans, it's a moment that makes the night that much more significant and leaves a lasting impression.

Take photos, sign autographs, or just have a conversation – whatever feels right to you or your band. You can also get creative with this. I saw Mickey Avalon in concert, and for $10, fans could line up after the show to snap a Polaroid picture with the singer. A ton of people did it. When you're a touring artist on a tight budget, thinking outside the box can help you make a few extra bucks at shows.

After each show, check the activity that was generated on social media. Follow up by favoriting, replying to, and/or reposting any fan or media mentions from the night. This helps you gauge the kind of buzz each show receives, how word-of-mouth is growing, and which cities prompted the most activity.

Tracking social media mentions is another effective way to connect with fans online who attended the show. Now is the time to respond to those posts by individually thanking people for attending, liking, or commenting on a photo that was taken. These small actions generate a stronger connection between you and your fans while maintaining that post-concert buzz.

There are lots of ways to capture the night on- and offstage. A lot of bands scan social media for photos from their set and ask fans for permission to repost. Some artists take photos of the crowd right from the stage. Other ideas include sharing a photo of the band meeting with fans after the gig, crashing in your tour van/bus, or celebrating at a bar. Highlight different specific moments from each night that capture the energy of the concert, the city you’re playing in, the people you met, or the adventures you had.

Go the extra mile and show hospitality to anyone accommodating you while on the road. Crashing on someone’s couch or in their guest room? Leave them a memento, like band merch or a little note before traveling to the next tour stop. These small acts go a long way. Leaving behind good vibes in each city will make people more than happy to have you return again.

On a bigger scale, thank each city on social media for having you. If you're looking forward to returning, say so. Maybe even share something you learned about the city, or a highlight from the visit. Most people are very passionate about where they're from, and everyone appreciates it when visitors show their city some love.

Did the venue you play have a bathroom covered in graffiti and stickers or a wall of names featuring bands that have played before you? If so, add your band's sticker, name, note, etc. among the others. Hitting up a spot for coffee or breakfast before heading back on the road? Leave a merch item and a note for the next person to find. Think of fun, subtle (and legal) ways to commemorate your time in each city, and to surprise unsuspecting individuals.

While building buzz and awareness before a show is crucial, there's just as much value in the follow-through after a show. Touring gigs get your fans offline and seeing you in real time. Take advantage of this opportunity by paying attention to who these fans are, and showing that you value these connections. These actions make a world of difference in word-of-mouth buzz and building up your audience one fan at a time.