5 Cures for a Common Case of Gear Acquisition Syndrome (GAS) 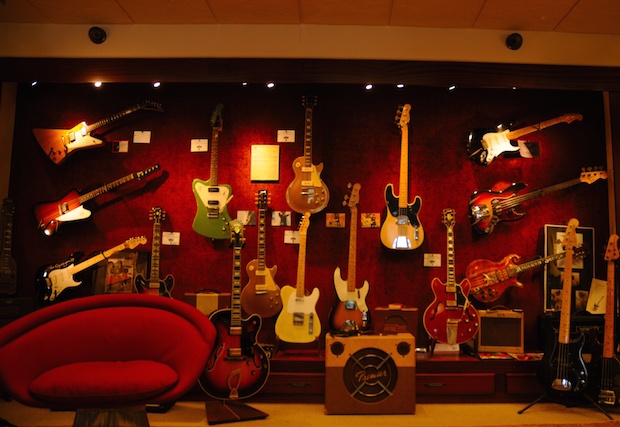 Image by Christian Mesiano via Wikimedia Commons / CC BY 2.0

It eats up your time and slows down your productivity. It’s been known to stop recording sessions in their tracks, break up bands, and end lifelong friendships. It promises unimaginably glorious results, but as anyone who’s ever had it knows, all you get from it is crushed dreams and credit card debt. That’s right, we’re talking about Gear Acquisition Syndrome (GAS) – the unquenchable desire for more and more music gear. If think you may be suffering from GAS, don’t worry – we’ve all been there, and we can all get through it if we just stick together. Before you panic, try out these five household remedies for GAS, and if they don’t help you, consider seeking professional advice.

Whether it’s a high-end microphone, a vintage guitar, or a Steinway grand piano, it’s important to remember that there are ways to get access to music gear without making a purchase. Music shops will rent you all sorts of gear that you could only have dreamed about getting your hands on before – often for a fraction of what the gear is worth. Just be careful not to indulge your rental habit too much, or to turn your rental into a deferred purchase plan that starts piling up interest payments.

We often forget as well that many of the classic pieces of gear we associate with our favorite musicians didn’t actually belong to those musicians in the first place. The iconic Telecaster that Jeff Buckley used to record Grace actually belonged to a friend of his named Janine Nichols, and Nels Cline borrowed Mike Watt’s 1959 Jazzmaster to take on tour before eventually buying the instrument from him (for a grand total of $800 – not bad for an instrument that would now retail for at least $10,000).

Many of us who record or mix music associate certain sounds with certain iconic pieces of studio gear like compressors, EQs, and mixers. So does that mean everyone who wants the classic "SSL sound" has to buy an actual SSL mixing board? Absolutely not. Chances are, you can get almost exactly the same sound from a digital plugin for a fraction of the price.

And you don’t always have to go digital to save money, either. There are many independent microphone manufacturers out there that make realistic-sounding knock-off versions of classic mics like the Neumann U87, so you can get that classic Neumann sound from a real piece of analog gear, without having to blow your life savings.

There’s nothing wrong with buying gear – as long as you can actually afford it. That’s why it’s a good idea to set an annual or even monthly budget for gear expenses. After all, it’s hard to stay within your limitations if you don’t know what your limitations are. With a realistic and well-thought-out budget, you don’t have to feel guilty about buying gear once in a while as long as your expenses don’t exceed your budget.

Rather than being restrictive, a budget can actually give you more flexibility: it allows you to use your money when it’s available, but it also lets you know when your gear habit is about to interfere with other pesky habits like eating three meals a day or paying your rent on time.

4. Enjoy what you already have

Being such visionary and forward-thinking individuals, many musicians find it challenging to live in the moment and enjoy what they already have, whether that’s career success or musical equipment. That’s why we all need a good reality check once in a while to force us to take stock of what we already have. Think back to when you bought some of your current equipment in the first place and try to remember how excited you were in that moment. If that doesn’t work, try re-reading some of the reviews that first convinced you to buy the gear you currently own. If you can recapture some of the excitement of that initial gear purchase, you’ll find that your desire for new gear starts to slide away.

How many amazing albums have been made with sub-par equipment? Beck, Iron and Wine, Queen, the White Stripes, the Rolling Stones, the Beatles, the list goes on. Often, these recordings are considered great not in spite of, but because of the poor quality of the equipment.

Take Beck, for example – when he was recording Odelay on an outdated version of Pro Tools that belonged to the Dust Brothers (see, borrowing works!), he found that the software was so slow that he had time to listen to albums while he was waiting for the computer to process sounds. As it turns out, Beck found most of the samples that ended up on the album during these technology breaks.

While we all love to buy, think about, dream about, and obsess over the latest piece of musical equipment, let’s not forget what really matters in the end. When we see a great building, we’re not thinking about the type of hammer the carpenter used – the carpenter might have thought a great deal about his tools during the construction process, but all we see now is the beautiful structure that remains.

The same goes for your music. While you might fret endlessly over which of your Stratocasters to use on which song, and which of the five possible pickup combinations to use for each section of each song, all your listeners will care about in the end is whether or not your music makes them feel something. So if you find that your case of GAS is really incurable, perhaps the best thing you can do is to just pick up your instrument or set up a microphone (please – just any microphone!), start making music, and start feeling something.