5 Facts All Musicians Should Know About Stage Fright 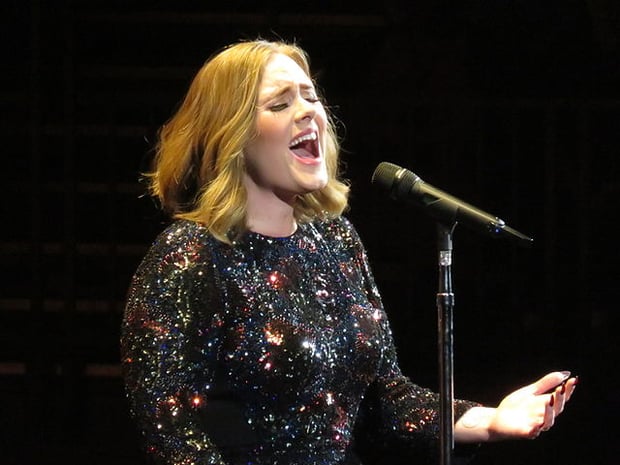 Image via Wikimedia Commons / CC BY 4.0

Showtime is in 10 minutes. Peering out over the crowd and you see Uncle Jerry here. Of course, he brought the whole family, their friends, and even the friends of their friends. In the front row, that cute girl from work anxiously awaits. You would normally be mad at Uncle Jerry but there's no time.

Your mind is somewhere else completely. Your heart is pounding hard, practically leaping out of your chest. An army of butterflies dances around in your stomach and those sweaty hands are simultaneously hot and cold. Your brain is in overdrive as you try to remember what the band practiced just the night before. Vision is going blurry and your whole body begins to shake and weaken. Various fears and doubts start to formulate and a terrible sense of negativity takes over.

If any of this sounds familiar, then you've probably experienced stage fright.

Stage fright can be a terrifying experience, but everyone gets it to some degree. It's possible to overcome these massive feelings of fear, but to do so, the concept of stage fright must be fully understood. That being said, here are five things every musician should know about stage fright.

Oftentimes, people think stage fright is reserved for the timid and weak. If you suffer from stage fright, please understand that's far from the case. You're not alone – in fact, stage fright is a party with some of the world's best musicians in attendance. Pavoratti, Adele, Eddie Van Halen, Miles Davis, and more have all admitted to getting a little nervous before performing.

Anxiety is quite common in the industry. According to a survey of orchestra musicians, 96 percent reported anxiety prior to going onstage. Orchestra musicians, of all people, seem like the most prepared. They tend to carry themselves so professionally and take their craft seriously, yet, even they are human.

Now, it doesn't necessarily help address the issue just because other musicians suffer from the same problems you do. We'll get to that part eventually, but at least you can have comfort in knowing you're not alone.

For those prone to stage fright, knowing that it might be permanent probably isn't good news. Well, they say acceptance is one of the first steps for development. Stage fright very well could remain with you throughout your entire music career, but that isn't necessarily a bad thing.

Think of stage fright as a part of your character. It can be molded in a way that will eventually help your playing. Think about those times when you're in a complete state of concentration. The musical ideas are flowing steadily and you seem to hit every right note.

It might seem that stage fright prevents one from entering this zone, but it's quite the contrary. By channeling anxiety properly, musicians can enter "the zone" more easily. Anxiety helps with drive and inspiration. If you went onstage without caring how well you played, it might translate to a mediocre performance. Stage fright keeps you on your feet. It pushes you to be the best you can, so don't be so quick to hate it.

3. It's psychological and biological

Now that you know stage fright is a popular symptom, and you're stuck with it, here's a little information on how it forms. Perhaps the best explanation for why we experience stage fright is the biopsychosocial model of stress. Essentially, this means the stress is both psychological and biological.

When we experience stress, hormones are released throughout our bloodstream, similar to adrenaline. As a result, the famous fight-or-flight response kicks in to help us address the issue. Back in the day, this would happen when you ran across a bear in the woods, but for musicians, the same response can be ignited with something more psychological like stage fright.

However, in this situation, the fight-or-flight response doesn't exactly work. Running away from a venue won't help your career, nor will fighting hundreds of audience members.

The reason your brain is running on overdrive before a show is due to calculations. Only the brain would be thinking about math when you need it the least. In these calculations, the brain tries to figure out the odds that you'll either succeed or fail. When the brain chooses to believe the former, then anxiety isn't felt. On the other hand, the brain can easily think that your performance will be horrible, thus resulting in the feeling of stage fright many are familiar with.

Now that we've diagnosed the source of these issues, perhaps it's time for advice.

So you've come to accept the fact that you have stage fright and it's okay. Now, you want help fixing the issue. The good news is, it can be done. The bad news, however, is that it's not easy. There's no supplement or special diet that will reduce the symptoms of anxiety. (Although, that hasn't stopped people from trying.)

Drugs and alcohol are widely considered to be effective ways for reducing stress, but that's only a temporary solution. It simply masks the feelings of anxiety, and in some cases, can even make it worse.

Then you have the people who rely on some more natural solutions to cure stage fright. There's yoga, meditation, sleep deprivation, and others. Some even think eating a diet high in potassium and tryptophan will make you sleepy, thus balancing out the effects of stress. Sorry to all the turkey lovers, but that myth about tryptophan has already been busted.

For all the people out there claiming strategies like this have worked for them in the past, well, you're not necessarily wrong, but you're not totally right, either. Most likely, you have fallen victim to the placebo effect. It may feel like the stress is reduced as a result of a certain method, but it's not because of the chemicals inside food or drugs. Your mind has simply played a trick on you and has not cured your stage fright. As you'll see in the next point, though, perhaps that's not such a bad thing after all.

5. It can be healthy

How can something that makes you feel so bad be good for you? It may seem crazy, but stage fright may actually be helpful. Musicians spend years trying to rid themselves of the feeling, but if they learn to work with it, anxiety can be performance booster.

Putting all your efforts into beating stage fright not only takes up valuable time and energy, but it's a losing battle. Instead of fighting the current, so to speak, research shows it's better to go with the flow.

According to a recent study from Harvard University, moderate amounts of stress can be converted into positive energy. It's possible to trick your brain from feeling stressed out into a feeling of excitement. By reframing the anxiety in your mind, the brain will start thinking more confidently and you'll begin to see a positive change in performance.

Stage fright does not have to be something we shield ourselves from. With the right mindset, stage fright can become a powerful tool to help ignite your career as a musician.

How do you handle stage fright? Share your methods in the comments!

Next up: 5 Strategies to Overcome Stage Fright