5 Live Show Investments (Besides Gear) That Will Elevate Your Shows 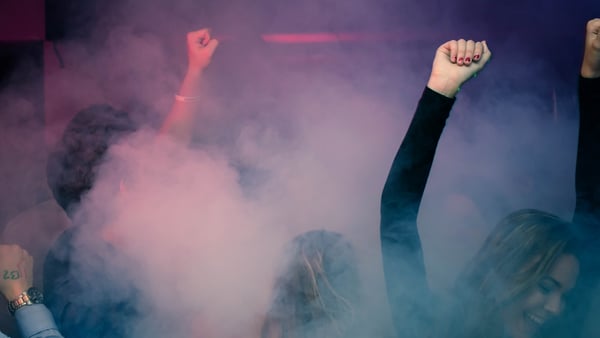 Get a fog machine. Fog machines rule. (Image via Stocksnap.io)

When we talk about a live-show setup, we're usually referring to gear, obviously. But there's actually more you can do to ensure a memorable performance. Sounding good is the bulk of the battle, of course, but looking good counts for something, too.

Visual effects onstage, lighting, and the way you present your merch are inevitably embedded in a fan's memory of the show. Thankfully, most of these upgrades won't set you back much. Read on for five relatively inexpensive investments that'll boost your live experience.

The standard table showcasing physical releases, a pile of buttons, and a row of shirts plus maybe a few hanging behind you works just fine for selling at shows. But why not go the extra mile? Draw in shoppers like any retailer would by displaying your goods in an eye-catching way.

We're not talking bulky clothing racks or a glass casings, obviously. Some string lights around signage you didn't hurriedly draw up with a Sharpie is a great start, and you can get more creative from there. Try these ideas on for size:

Any of these additions could revamp your merch table and increase your potential for sales.

As an independent band, you're going to play in plenty of shoddy lighting situations. Many small clubs, as well as other kinds of venues and businesses that host shows but aren't proper live music spots, don't have professional stage lighting. That whole shebang is expensive, and a lot of clubs simply don't have the funding for it. (It's not only bands who struggle to remain independent and DIY, you know.)

Even if you're playing a venue with decent lighting, though, rigging your own illumination will make your set stand out. Outline gear with string lights, use vintage lamps with colorful bulbs, cop some cool LED strips, get a strobe – the options are virtually endless.

Whatever you do, it doesn't have to be expensive (go thrifting, try dollar/budget stores, or browse Amazon), and you shouldn't overdo it. Aim for a subtle, but impactful, effect, and don't forget to test how it looks in photos and videos.

3. Customize your drum kit, amps, and other gear

Spruce up an old or mismatched kit or add extra oomph for the hell of it by spray painting its wraps (check out this tutorial) or decorating the bass drumhead. With the latter, you might commission an artist friend (make sure the paint is mylar compatible) or customize your own design (a band logo or any other image) using a website like DrumART.

You can decorate your amps too, of course. Paint the whole cabinet, just add accents, or stencil a design on the front. (In all cases, disassemble first, and be careful to avoid damage, obviously.)

You probably don't carry your own mic stands to shows, but you might want to if they were customized in some way – or you could craft a portable decoration that's easy to clip on at shows. Additionally, more subtle touches, like a special guitar strap, can make a difference in your onstage look.

Fans probably won't forget your band name if it's on full display throughout your entire show. Create a banner cheaply by using scrap fabric or even a thick tablecloth as the canvas. If you've got the funds to invest a bit more, you can design your own on new, sorta nicer materials for about $100 online.

5. Buy a projector for visuals

Supplement your stage presence by running old films, funny found footage, swirling psychedelic designs, projecting your logo, or whatever else you're into during your show. A sheet stretched taut works just fine as a backdrop, but even without one, visuals projected onstage can make for a striking spectacle, which translates to a memorable set for fans.

Next up: 4 Tricks to Make Your Live Show Vastly More Interesting Than Just Running Through Your Album