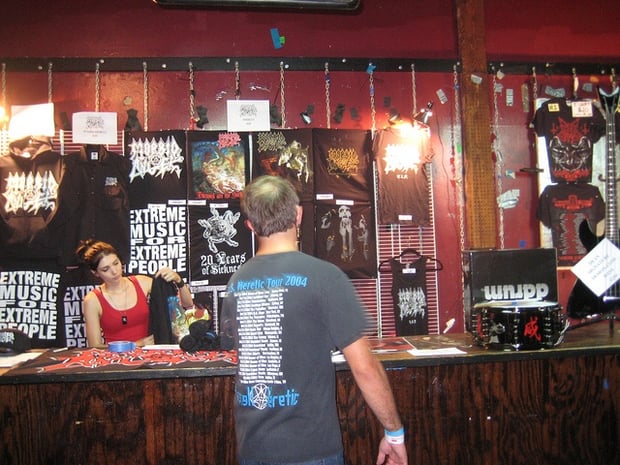 As a live music fan, I spend a lot of my time between sets scouring the band's merch tables. Sometimes I rush in knowing exactly what I want, and other times it's a kind of listless wandering, where I'm just waiting for something to jump out at me. But what about the fans who don't ever stop by, or who come by only to leave seconds later because they can't make sense of what you have to offer? How can bands attract the attention of not only new fans, but also future fans?

When I asked musicians and fans for their biggest must-have when it came to merch, by far the answer I got the most was "lighting." And if I’m being honest, it's something that's never occurred to me – but has probably subconsciously deterred me from a lot of tables. After all, it's tough to buy something when you can't really see what's on the table. Other than lights for the table itself, consider lights leading up to or around your table to attract even more attention. I don't mean anything crazy or gaudy (unless you're into that kind of thing), but anything that will help lead people to your table will be a huge asset. Think of it as a runway for the fans about to land at your table.

2. Keep your table neat and organized

The more attractive and welcoming your table, the more people you're bound to attract. Put on a tablecloth, hang a banner, and arrange everything neatly. Consider hanging T-shirts behind you so that fans can get a good look at what might suit them best. Display a pricing sheet, and for goodness' sake, keep the table organized. I know a lot of times fans will come up and dig through your T-shirts, stickers, or koozies, but once they've left, tidy up!

Don't forget to work the table and really get to know the people coming up to it. For fans, approaching even the smallest bands can still be nerve-wracking, especially when it's someone they admire. So if that band takes the time to chat them up, they're a whole lot more likely to walk away with a piece of your merch – and you're a whole lot more likely to acquire a fan for life.

[The Show’s Not Over: How to Engage, Connect, and Follow Up]

3. Put your table near the stage

If I've learned anything from watching hundreds of hours of HGTV, it's that the thing that matters most is "location, location, location!" And that goes for your merch table, too. You may think that location doesn't matter, or that the audience will find you no matter where you are. And while that may be true for your core group of fans, location can actually play a huge part in who stops by your table. Whenever possible, try to position yourself where people are walking in, towards and (later) away from the stage. If you can catch them on their path out of the venue between sets, you're golden.

Does this even need saying? I will almost 100 percent of the time take a sticker, poster, guitar pick, pen, you name it – if it's free. And I'm not alone. Most people who are already at a show either like your band or have a really good chance of liking your band based on the fact that a) they're at the show, and b) bands tend to pair with similar bands. So if you're offering some of your lighter merch for free, you're a lot more likely to not only guarantee at least a few people take it (and have them become a billboard for your band), but it could also lead to upsells in merch, future shows, and even a new fan!

If you're not already taking names and emails at your merch table, you're really missing out. This is a prime opportunity to gather fan emails, so make sure you have your signup sheet out. If you're so inclined, a nice touch is to have an iPad or laptop at the table where people can directly type in their information, and maybe even get a free download or discount at the merch table right away. That way, you don't even have to go in and manually enter their information later, and there's the possibility of giving them an instant incentive. Could it be any easier to get close to your fans?

[4 Ways to Grow Your Email List at Your Next Gig]

This one is a little more complicated, but in my opinion, it's worth it. A lot of bands don't take credit cards at shows for the simple reason that they don't have the resources. I get it, but I can't tell you the last time I carried more than a couple bucks in cash and how often that has deterred me from getting a pricier piece of merch – or any merch at all. Nowadays, things like Square and Intuit exist, and they allow you the luxury of taking credit cards on the go. And don't forget to advertise that you take credit cards!

[4 Ways for Musicians to Accept Credit Card Payments at Shows]

Get more tips to move your merch:

Angela Mastrogiacomo is the owner of Muddy Paw Public Relations. Muddy Paw specializes in working with up and coming artists on personalized campaigns designed to bring their careers to the next level. To date, we’ve secured placements on sites such as AbsolutePunk, Substream, Property Of Zack, PureVolume, Anti-Music, and many more.