The 5 Most Annoying, Ineffective Ways That Bands Seem to Always Promote Their Music 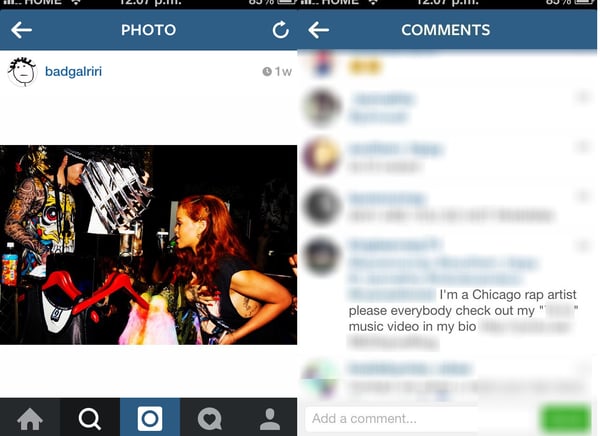 We wholly recommend promoting your band on social media (duh). It's easily the best way to maintain and grow your following, and it's arguably eclipsed flyering as the most reliable way to announce a show and reel in a crowd. What we can't advocate, however, is being obnoxious about it. We've all had our nerves grated by someone's promo. No matter how alluring or special the artwork, there are certain marketing moves you just shouldn't make online.

Whether it's posting in an inappropriate forum or bombarding followers with the same message, don't be one of those musicians who ticks off people in an effort to gain more fans. That rings extremely counterproductive, right? It is. Here are our top five ways musicians make eyes twitch with annoying promo. Please, if you're guilty of any of these maddening methods – STAHP!

You'll want to share the Facebook event for your upcoming show or the link to your new album on Bandcamp more than once, and that's not only acceptable, but it's also necessary. Posting multiple times ensures plenty of people will get the message, especially on a platform like Facebook that restricts the reach of posts made by page accounts unless they're sponsored. But when a band posts the same message every few hours, people begin to intentionally overlook it. If that band is posting even more frequently than that, then they've made it to irksome territory.

The way Facebook brand pages are set up now, it's unlikely your fans will see multiple identical posts. The algorithm it uses weeds them out from everybody's timelines. But if fans check out your actual page, they'll see the repetition – and the monotony of your content will likely drive them to click elsewhere. On Twitter or Instagram, your repeat posts will show up, so the likelihood of annoying followers is much higher. Try varying your message – as in, don't use the same text or image every time and post only once a day, tops, on each channel.

People who post relentlessly are often relying on only this method for promotion, when really they should diversify their strategy by seeking out press or hanging posters and handing out flyers.

When you receive a message from a Facebook friend you rarely speak to, chances are it's either something that belongs on Tinder or generic promo crafted for circulating to as many people as possible. The former is certainly cringe-worthy, but it's the latter we're concerned with here. It's obvious those messages aren't written with the individual recipient in mind, and that's the bedrock of the problem. You're basically saying, "I don't care who you are. All I care about is the number of bodies at my next show or the view count on our music video."

Nobody likes to be so blatantly reminded that we're not uniquely special snowflakes, okay? And anyone who falls for the mass-message promo trick and actually replies – like, "Hey, I might be able to go if I can get off work!" or "I'll check it out!" – probably won't get a timely reply because you're tied up spamming other people. The whole thing is bothersome, and probably isn't enticing folks to come to your gig or check out your content.

Another annoying direct-contact method is Twitter-specific. Maybe this applies more to the press than regular listeners, but when someone tweets me a link and a winking emoticon, my interest level plummets. In most cases, I assume the song or video or whatever it is will be awful, because anybody who thinks a vague message with a winking emotion is an appropriate way to get a professional journalist's attention is probably doing everything else in their music making wrong, too. While that's not perfectly sound logic, it's how I feel – and it's not a stretch to assume other journalists react similarly.

You've probably seen this before: someone leaves a spiel on a Facebook thread or Instagram photo that definitely wasn't an open call for outsider promo. And did you click whatever they posted? Probably not. Plucky artists are making a mistake by interrupting threads and comment sections with "check out my music" messages. It oozes desperation and unprofessionalism, oftentimes with a dash of "I'm clueless about how the industry works." And if you've pulled a genuine combo breaker, you might even see some backlash, rendering your efforts entirely useless.

4. Riding the coattails of other events

It's not only the attendees you irritate when you share your promo in another band's event. Anyone involved with the show might notice the foreign content – the promoter, venue owner, booking agent, musicians. If you employ this method often, those people will remember it when you try to work with them. Seriously, you could get yourself blacklisted by people who could have helped you at some point. Especially if you're sharing your gig in an event that's happening on the same night, you're going to piss off the wrong people.

There are a few situations in which posting your promo within another event is okay, like if your shindig is the afterparty and you're trying to get the before-party people on board. Carefully consider what you're posting and where before you do it.

I can't believe this is a thing, but it is. Pop-up ads are high on the list of annoying marketing tools, and when music begins to play automatically – whoa. Not cool. Anyway, what's the first thing a lot of people do when a spammy window emerges? They close it! Auto-play pop-up ads for artists and bands are aggravating and unprofessional. Is there any instance in which they're acceptable? We don't think so.

Now that you know how not to promote your music on social media, get a boatload of must-dos to get yourself out there using Facebook, Twitter, and more!