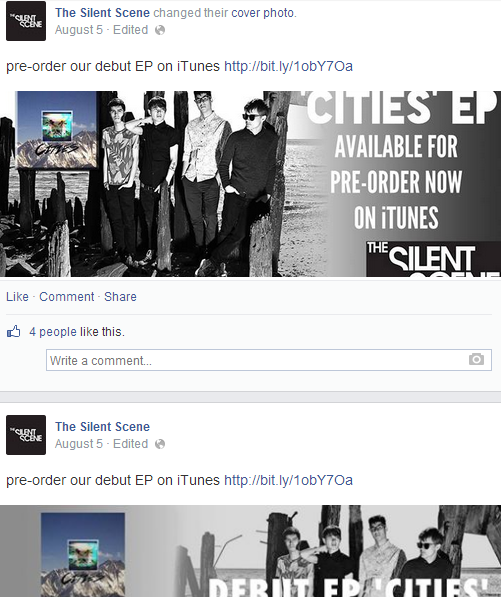 The Silent Scene share the news of their new EP two different times on one day in two slightly different ways.

Content is everything in this new digital world we live in, and no matter how small or insignificant it may seem to you, a singular item could mean a lot to people if you do your job well. While everything you can share online has some worth, new, original content is always the most valuable. And while the story is still fresh – that “story” being a new song, photo, album cover, etc. – you want to get as much out of it as possible.

When you have a new piece of content, you’re really excited about it, and you want to make sure everyone following you sees it. It’s typically not just that you want your fans to be informed – there could be real money at stake. In order to share new items and get the best return possible, you have to share whatever it may be several times over a short period of time. If it sounds annoying, don’t worry – if it’s done right, it won’t be.

Think about this scenario: your band just released the music video for your new single. You post the link on Facebook and Twitter on Monday morning, garnering a number of likes, shares, and comments by all those who knew it was coming. While that was surely a success, there are people who won’t see the video, as they aren’t on social media at that time.

People work, people are in school, and sometimes it’s just a matter of people having different habits when it comes to social media. Sure, many of us are fixated on our feeds all day long, but that’s not the case for everyone. Your social media strategy can’t be one-size-fits-all if it’s going to be effective. By the time half of your followers log on to those sites, your post may be too far down in their feed, and they’ll miss it.

On top of that, consider that you may have fans all across the country or even the world, and not everyone is looking at social media when you are. The majority of your followers may be with you in New York City, but what about the handful of them that live in Tokyo, Paris, or Sydney? Heck, even those in Los Angeles may miss something if it’s too early for them. Consider posting at different times during the day to hit not only those across the globe, but possibly early risers or night owls.

If you have a big item to share (again, think about a new song or video), sharing it several times in the first week is completely acceptable, as long as you shake things up a little. Don’t just copy and paste the same thing several times over a week – put a little more effort into it! A simple introduction with the first posting is easy, but with subsequent repostings, you can choose to be funny, informative, or anything else you can think of. Nobody really minds a well-worded “in case you missed it.”

Also, try to find a balance between posting once and posting one hundred times in the first week. Sharing your flashy new music video three to four times in the first week or so can be fine, as many will miss that you did so, and those that catch it probably won’t mind. If, however, you’re that band that bombards everyone with constant annoying reminders daily about something many of them have already seen, you’ll lose favor very quickly.

So, are there good ways and bad ways to share certain things more than once? Sure. Is there an exact science to how often, when, and in what way exactly you should do so? No. It all varies based on what the content is and who your audience is, but if you know them well, the best ways should be pretty easy to figure out.