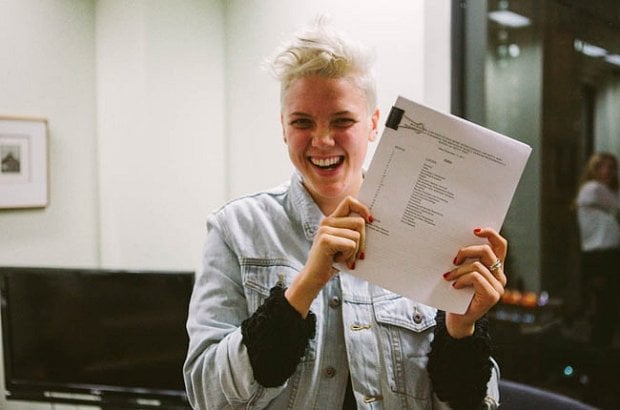 Betty Who with her RCA record contract. (Photo by Kyle Dean Reinford)

You've finally made it. A record label recognized your talent and offered you what seems like the deal of a lifetime. But before you sign on the dotted line, make sure you actually understand what you're signing so your dreams of fame and fortune don't turn into a nightmare. Here are five tips every artist should consider before signing their first recording contract.

1. Watch out for contracts with an initial term lasting more than one year

Typically, the initial length of a recording contract is one year. This one year term is generally followed by several option periods, where the record label is free to renew your contract for additional time periods if they like the work you're producing. By limiting the length of your contract to one year, not including option periods, you prevent a record label from effectively controlling your life and creative work for an unreasonable amount of time.

You never know where your career will take you, and it's important to keep your options open. I've seen unscrupulous record labels use five- and even 10-year terms, locking their artists into long-term contracts that destroy their artists' creative lives and financial futures. Before signing that contract, make sure the record label isn't locking you into a lengthy contract with no escape.

2. Get a release commitment

Without a release commitment from the record label, you'll have no guarantees that the label will actually do the work to get your album produced, packaged, and distributed to the public for sale. A typical release commitment is a promise from the record label that it will release at least one album during your initial contract term. If you record the necessary tracks for a record and the label fails to release the record, you should then be allowed to walk away from the contract.

In addition, you should think about negotiating a minimum marketing spend as a part of your release commitment. This gives the record label some "skin in the game" when producing your album, forcing them to actually spend money to market your creativity, making your hard work pay off.

3. Make sure your royalty rate is reasonable

Although royalty rates differ wildly based upon an artist's notoriety and past success, there's a general ballpark number for royalty rates that every artist should know. For new artists with little-to-no notoriety, a royalty rate of five to 10 percent is typical. Up-and-coming artists generally see between 10 and 14 percent royalty rates, while seasoned professionals can bring in as much as 18 percent in royalties.

Don't let a record label convince you that a one or two percent royalty rate is the industry standard. Some record labels prey upon unsuspecting artists by offering relatively large upfront signing bonuses, giving their artists an initial feeling of success. But in return, the contract gives the artist a paltry royalty rate, ensuring that the label – not the artist – will reap all the long-term rewards of artistic success.

4. Watch out for hidden royalty deductions

Even if your royalty rate is reasonable, keep your eyes peeled for hidden royalty deductions. Before paying you even one cent in royalties, the record label is typically allowed to recoup much of its expenses through so-called "deductions." Standard deductions include recording costs, video production costs, the cost of creating CD and DVD packaging, and other similar costs.

But some record labels sneak in abhorrent and enormous royalty deductions that all but guarantee you'll never receive a royalty check. Watch out for deductions based upon the record label's general costs of doing business, like the deduction of record label owners' salaries and benefits. You should also keep your eyes peeled for deductions that give the label a blank check, like unlimited deductions for travel, hotel stays, car rental, meals and entertainment, and other costs that a devious record label could use to rack up a lavish tab at your expense.

5. Make sure you can audit the record label on royalty payments

Artists often ask me how they can ensure the record label is being honest with them about the total number of albums or tracks sold. Without honest communication and detailed record keeping, the relationship between artist and label can quickly turn contentious. An audit provision is the best way to prevent this type of communication breakdown before it happens.

The typical audit provision gives the artist the ability to hire a third party auditor to go through the record label's books and records and make sure they're paying the artist what he or she is entitled to under the contract. Typically, the artist must pay for this type of audit. However, many audit clauses require that the record label pay for the audit if a large discrepancy is found.

Before signing a record deal, it’s always a good idea to hire qualified legal counsel to review the record label's proposed contract. But with the above tips in mind, you can now at least look at the contract and know whether the label is trying to squeeze every last penny out of your artistic abilities while hanging you out to dry.

Matt Villmer is an entertainment attorney in Charlotte, NC. He recently relocated from NYC where he practiced entertainment and business law. For more information, visit www.sodomalaw.com.