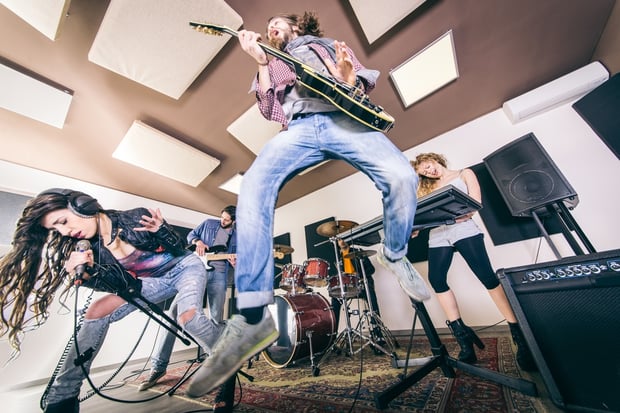 Before you enter the studio to share your music with the world, keep in mind that a tight practice or live set may not be enough. There are things that come out on record that you might not notice beforehand but will throw the listener for a loop (and I mean that in a bad way).

That said, it’s best to safeguard against such things as much as possible. Here are five ways for your band toset itself up for success and absolutely kill it in the studio.

A lot of producers and studio engineers may ask to hear some rough sketches of your songs so they can better prepare to work with you. For engineers, demos provide them with ideas on how to mic instruments and vocals for your style, as well as what specific recording techniques and gear should be used. A hardcore band will record vocals differently than a pop artist, for instance, as will a metal drummer than a country drummer.

Sometimes bands use studio gear instead of their personal gear, so demoing also provides producers and engineers with what amps, kits, and even guitars to use. Demoing also helps producers offer solid advice on song structures, suggested harmonies or note changes, and more.

Typically, the process of demoing and restructuring with producers is considered pre-production. Demoing at home could save you a lot of money in the long run when it comes to studio time, even if you're using cell-phone recordings.

[Should You Record Your First Demo at Home or in a Studio? A Look at the Pros and Cons]

First let’s talk about metronomes. Before my first real recording experience, the engineer told our drummer that he should figure out the BPM for each song we were recording and our band should practice to a metronome set at the appropriate pace. So we did. Ultimately, we became a much tighter band because of it.

Just as important as timing, however, is precision. For instance, guitarists can change chords at slightly different times and never notice until they hear it played back to them. It’s actually been recommended to me that a band should play through all of their songs very slowly for the purpose of tightening up every little part before they ever step foot in a studio. This is supposed to help perfect strumming patterns, part changes, drum fills, and more, and I definitely don’t think it hurts.

3. Plan for extra instruments and vocals

So maybe you don’t have a keyboardist, but you do have one song that really calls for a keyboard. Even weirder, maybe you want a sax solo in your metal song instead of a guitar this time around. All of that’s great, but you need to have it prepared beforehand.

Obviously, these parts may be done by someone outside of the band who doesn’t know your songs very well, so in that case, demos become even more essential so this outsider can practice them beforehand.

Also, have your backing vocals and harmonies worked out early, because I find a lot of my friends’ bands don’t even think about those before they enter a studio, and obviously then have to pay for the time it takes to figure them out.

4. Figure out tones and settings

Figure out how you want your instrument to sound, and furthermore, make sure that your gear is in proper order. My band LATE just made a record and the first thing our drummer did was get new heads for all of his drums. I assure you, if he hadn’t done so, the drums would have sounded less powerful and more dull, which wouldn’t really work for what we play.

In fact, I believe that most people recommend using new drum heads before recording, as well as new strings on any guitars. If you’re using your own gear as a guitarist, prepare by choosing the tone, effects, and other settings you want through your amp before entering the studio. It'll speed the process up and you may even have some extra time at the end to go back and fix or change things you’re not totally satisfied with.

Last but not least, talk to your producer or engineer and find out how much time it typically takes to record the amount of songs you want in the way you’d like them. Be aware of the pros and cons that come with recording live or multi-tracking, the different rooms a studio might have for you, and of course, how much each of these things will cost.

I’ve heard of more than one established band that's run out of time in a studio. Chicago’s The Lawrence Arms, a very popular punk band, ran out of time for both of their first two records and had to release the rough mixes as the actual record because they couldn’t afford mixing. Crazy, huh?

What all did I miss? Any more essential fine tuning tips I should be aware of? Let me know over on Twitter.