The 6 Best Analog Synthesizers on the Market 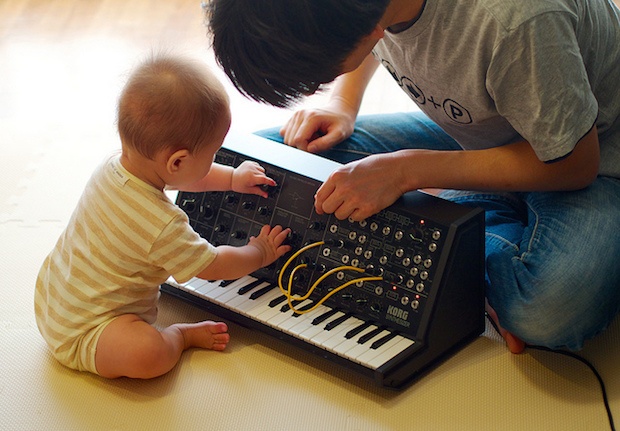 The baby above may make it look easy, but choosing a synthesizer comes with its share of difficulties. While digital synthesizers seem to be all the rage these days, don't forget their older, analog brothers.

Digital technology has certainly come a long way, and the gap between analog and digital quality is getting smaller. That being said, there's still something unique about an analog synthesizer that's yet to be replicated. For those looking to get a smooth waveform that's warmer and more natural to your ears, an analog synthesizer is the way to go.

Deciding to go analog is the easy part, however. Now, you have to choose which one to get. There are thousands of analog synths out there on the market, all ranging in quality and price. Thankfully, we've compiled a list of the best. 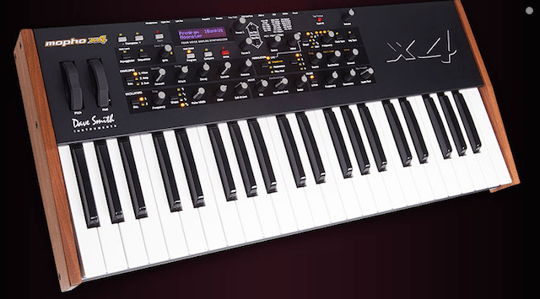 For fans of Dave Smith synthesizers, it doesn't get much better than the Mopho monophonic analog series. Jumping off of this success, we have the Mopho x4. The Mopho x4 takes the original model and adds four new polyphonic voices that allow the player to create smooth, soaring leads and warm, immense bass tones. The x4 has also included pads to the mix to make percussive sequencing that much easier.

All 44 notes on the keyboard come with aftertouch and velocity sensitivity. Additionally, there are four LFOs for varied modulation, an arpeggiator, and a 16x4 step sequencer. Each of the synthesizer's four voices is made up of two analog oscillators, two sub-octave generators, a selectable 2- or 4-pole famed Curtis low-pass filter, and three five-stage envelope generators. The voice also comes packed with 20 different modulation sources and nearly 50 destinations. 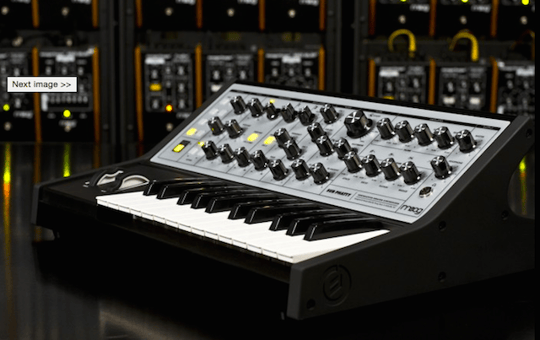 You can't have a discussion about synthesizers without mentioning the father of analog synthesizers, Bob Moog. Bob has been a pioneer in synthesizers since his Model D monophonic synth arguably became his most popular synth in history. In recent years, Moog instruments have seen a renewed interest, perhaps revolving around the Moog Voyager. Not to negate the properties of the Moog Voyager, but it's the Sub Phatty that really feels the like a return to the analog styling of the Model D.

The Sub Phatty has two oscillators. One offers a selection of saw, triangle, square, and pulse waves, while the second oscillator has the ability to be tuned differently and separately from the first. With the sub oscillator, one can add a square wave up to an octave below the first oscillator. There's also a pink noise generator that produces a wide frequency range. In terms of LFO modulation, users will find all the classic shapes like triangle, saw, ramp, and square.

Though vintage at heart, the Sub Phatty has some nice modern additions. The new multi-drive brings a little more grit to the Moog, and users now have the possibility to save original sounds as patches using four banks on the front panel. Some might find the two-octave keyboard limiting, but there are plenty of connection options like USB, DIN, CV/GATe, and more to make up for those shortcomings. 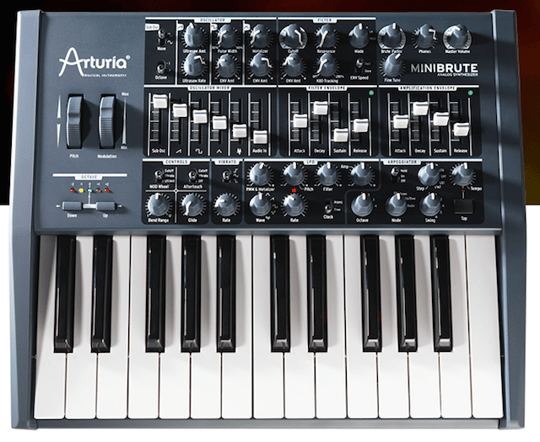 To many, Arturia is known for its hyper-realistic digital copycats of famous synthesizers. Now, the company has decided to take a shot at a true analog device of its own. The brave leap into this realm comes by the way of the MiniBrute. This portable and affordable synthesizer has set a high standard for modern analog synths, but it also has the skills to back up the price.

The MiniBrute can simultaneously mix all waveforms using sturdy fader knobs, with each wave having an added shaping control. Additionally, separate filter and amp ADSRs are the standards with the MiniBrute. Plenty of modulation is possible by syncing the rate to the onboard arpeggiator. The multi-mode filter includes low pass, high pass, band pass, and notch filters.

As far as connectivity goes, the MiniBrute has MIDI I/O, USB, and numerous CV/Gate connection options. You'll be hard-pressed to find a situation that the MiniBrute can not adapt to. Main output and headphone volumes are entirely independent, and the ultra-sensitive tuning controls make the MiniBrute ideal for the DJ/PA performance.For those looking to add a bit of grit to their sound, MiniBrute has a feedback loop effect called the "Brute Factor," which adds a lot of "dirt" to your patches. If you want to experiment with some high-quality analog sounds without

For those looking to add a bit of grit to their sound, MiniBrute has a feedback loop effect called the "Brute Factor," which adds a lot of "dirt" to your patches. If you want to experiment with some high-quality analog sounds without breaking the bank, consider the MiniBrute. 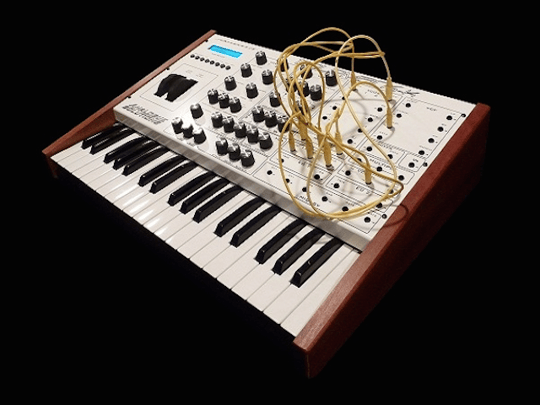 For those looking for a more subtle and organic tone from their synthesizer, the Telemark K SEM Modular synthesizer may be what you're looking for. The dual oscillators on the device feature both saw and square waves with pulse width modulation. According to Analogue Solutions, the inspiration for this design is based off the old Oberheim SEM. Fans of the Oberheim will recognize a similar layout in this new reincarnation.

Since the Telemark is a pure analog, there are no options to save patches. For some, this may be seen as an inconvenience, but think of it as a motivation to become a more organized and focused synth programmer.

The semi-modular design on the Telemark K with 1/8" patch points allow you to change the signal path as well as cross patch with other modular synths you may have. The connection options don't stop with the patch points, though. The Telemark K has a fully loaded stack of MIDI ports than can be edited and set up using the LCD display.

Besides functionality, this synth is a marvel for aesthetics. The solid, white metal chassis combined with luxurious wood panels ensure this synth is both sturdy and beautiful. The keyboard itself has a nice range of three octaves with semi-weighted keys, pitch control, and a modulation wheel.

You may have noticed that this is the second Dave Smith synth to make it on the list. That's no coincidence. While certainly on the higher end, Dave Smith products are some of the best ones on the market. Leading the way in this discussion is the Prophet 12, a hybrid synthesizer featuring 12-voice polyphony that uses the best of both analog and digital technology to deliver an impressive 792 programs. These are all efficiently crammed into four factory banks and four user banks.

The core of the Prophet 12's sound is found in the four oscillators that create the common saw, triangle, square, and sine waves. Additionally, there are 12 other complex waves with red, white, and violet noise to choose from. Fans of the vintage synths will be drooling all over the Curtis low-pass filter featured on the Prophet 12. Additionally, they'll love the drive, feedback loop, and sample rate decimator control. Add the four patchable LFOs to the mix, and the Propet becomes a prize possession for any sound designer.

Musicians will love this performance-ready synth, too. The Prophet 12 has five octaves of semi-weighted keys with aftertouch and velocity, as well as a pitch-bend feature, mod wheel, and two touch strips that can modulate the sound in a more creative manner. Although on the pricey side, this synth will keep experts and beginners occupied for a lifetime. 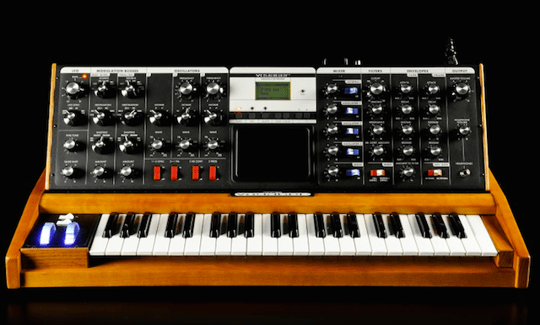 Just like the Dave Smith brand, you may notice that Moog has also topped this list twice. Again, it's for a good reason. While the Moog Sub Phatty is certainly an excellent synthesizer that has helped keep Moog on top of the market, it's the Voyager Performer Edition that really brought the company into the modern era.

The three oscillators (triangle, saw, and square) let the user have precise control over sound design. Meanwhile, the two Moog filters, stereo amplifier, envelope generators, and LFO help further mold that sound to your heart's content. All this power is delicately weaved into a strong metal encasement with a beautiful, hinged, hardwood cabinet.

The feel of the 44-note keyboard is assisted by aftertouch features and velocity sensitivity along with modulation wheels and pitch bend. As far as patches go, the Voyager has over 800, and with the included software, it's possible to save, program, and reuse patches in a convenient way.

The number of possibilities with this machine is quite disorienting. There are various pedal control portals and MIDI connectors that will keep musicians busy, although it still has a user-friendly quality to it. For those looking to get that world renowned Moog sound, it's hard to turn down the Voyager Performer Edition.