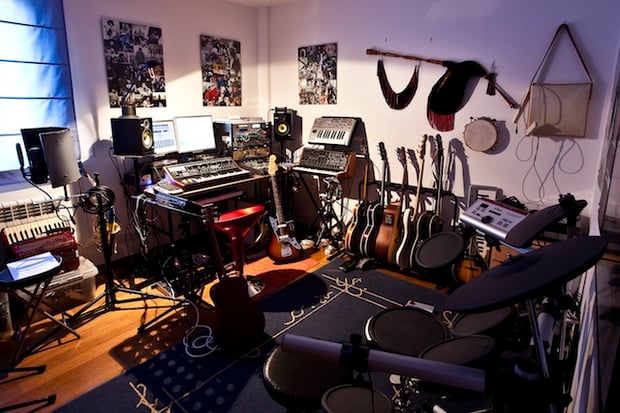 Modern technology has drastically changed the nature of working as a session musician. These days, many session players have almost as much skill as audio engineers and run their own studios where they can record from home. This is awesome for musicians, as it allows them to work from the comfort of their homes, but also for the clients, since they don't have to pay for studio time and wait for players to get to wherever they are.

There are a plethora of resources available for those who want to build their own home studios, but the vast majority of these resources are geared towards aspiring audio engineers and address how to cover the largest variety of recording sessions with the least amount of money. As a session musician, however, you aren't going to need the capability to record a variety of different artists; you'll just need to be able to record yourself at the highest possible quality. Thus, the priority is somewhat shifted when it comes to the kind of equipment you'll need. Here are seven recommendations on what to prioritize and how to go about putting together your home studio for session work.

Something to consider right off the bat: fancy recording gear won't make your crappy music equipment sound any better. In fact, it's just as likely to show the negative qualities of your gear under a big spotlight, potentially making it sound even worse! If you have aspirations of being a session musician, whether focused on remote sessions or not, you have to have pro gear. Join a bar band and save the gig money until you can afford the gear if you need to.

As a session musician, you'll often only be recording a couple of tracks at the same time and will rarely be doing any processing. Because of that, it's not completely necessary to spend your month's paycheck on a program like Pro Tools or Cubase. Affordable professional DAWs such as Logic or even programs like GarageBand or Mixcraft can be enough to get by in most cases. Remember that the program on its own doesn't have an influence on sound, just the organization of the tracks and processing controls. As long as it's a program you're comfortable using, it should do the trick.

If you're an engineer and recording full bands simultaneously, a top-of-the-line computer rig is essential. Again, you'll only be recording a few tracks at the most simultaneously and won't have to tax your CPU with excessive processing. Thus, the most upgrading you may have to do will probably be your computer's RAM (an upgrade that's worth it anyway, regardless of how much recording you're doing).

If you're a drummer, you may need a little stronger of a rig than a guitar player would due to the fact that you'll need a separate track for every drum. In most cases, a simple RAM upgrade should allow you to record without problems as long as your computer isn't more than a few years old.

When recording bands, your biggest concern will likely be having as many inputs as possible so that you can accommodate the needs of each group you work with. Thus, the instinctual reaction is to buy a large audio interface with eight or more preamps. However, these all-in-one converter/preamp boxes often sacrifice some quality as a result of them functioning as an all-in-one device.

Luckily, if you aren't a drummer, it's likely you'll only be recording one or two tracks at a time. This means that instead of buying a big, eight-input audio interface, you can focus your funds on one or two high-quality outboard microphone preamps. This way, you'll have a professional sounding recording while not having to sell your left leg for an audio interface that has both pro-quality preamps as well as converters.

Now, if you're a drummer, this will be a problem. You'll need preamps for every microphone, and generally, you'll have a microphone on every drum. In your scenario, I would actually go with the traditional home engineer route: save up for a high-end, all-in-one, eight-preamp audio interface. Then, you can gradually start picking up better preamps to augment your rig over time.

Now that you've got the preamp picked out, you'll need something to handle all of your AD/DA conversion. Note that if you're a drummer and took the advice I wrote above, you'll already have this covered through the use of your audio interface.

Professional level standalone conversion units can be incredibly expensive, and you may have to mod your computer with additional inputs to get it to connect with such a device. At this point, I'd actually pick up one of those interfaces I've been talking about. The difference now is that since you have a high-quality preamp, you won't need to focus on the included preamp when choosing an interface and can pick whatever make/model has the highest quality converters. Since you won't need to focus on the preamps, you can grab something with awesome converters that only has one or two preamps included, thus saving you quite a bit of money.

Of course, you'll need a quality microphone or two at this point. The choice you make when it comes to what sort of microphone to get is really going to depend on what kind of instrument you play. A violinist may want a few different condenser or ribbon microphones, whereas a guitarist will likely need a condenser and a dynamic microphone. The best recommendation I have when it comes to microphone choice is to talk with other session musicians who play your instrument, as well as engineers who have experience recording your instrument. They'll be able to give you great experiential advice on what to buy.

For drummers, there are some microphone companies out there that sell awesome drum packages, usually including microphones for bass drum, snare drum, and all of your toms. I'd recommend going with one of these and putting the real money into your overhead microphones.

Good recording gear used in a crappy recording environment won't sound good. And even if you listen on the best-quality monitors out there, the bad quality of the room can dramatically alter and cover up some of the things you hear. Once you've got most of your gear in place, start thinking about some room treatment. There are great DIY methods of getting good recordings in crappy rooms, such as building a vocal booth out of comforters, or putting a mic in front of a guitar amp and then putting a big rug over the whole rig. However, these are only useful as quick fixes, as you want to be able to listen to playback in an accurate-sounding environment as well.

Much of getting that "accurate-sounding environment" involves some room treatment, but definitely don't forget to get some quality monitors. These days, monitoring technology has come quite far, and you can get some decent stuff for a reasonable deal (especially if you buy used). Though they don't need to be good enough to mix on, it's important to be able to accurately hear the tracks you're sending your client and make sure that there aren't any technical glitches or problems that came up during recording.

Now that you have your equipment squared away, build your own home studio and learn the best ways to soundproof it!