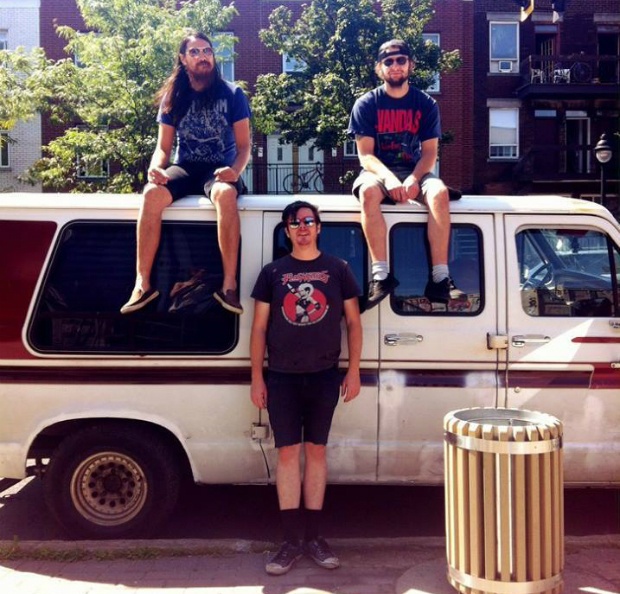 School Damage tours a lot. By the Toronto punk band’s own estimation, they hit the road at least one weekend a month, sometimes more. Traveling around Southeastern Ontario, Quebec, the US Midwest, and the East Coast a number of times has made them weekend warriors of sorts. Currently, the band is gearing up for a weekend run to Ottawa in Montreal in April, followed by a three-day run in at the beginning of May and a five-day tour to Montreal’s Pouzza Fest closer to the end of May.

So when the band’s bassist, Jon Cabatan, says some of the best experiences he’s had "have been loading a van with gear, playing strange places with my friends, and making music," you get the distinct impression he knows what he’s talking about.

Doing long-haul, cross-country tours may seem glamorous and adventurous, but the truth is they're hard work. Bands break up, friendships are ruined, bank accounts emptied. And when that happens on the other side of the country, it can be particularly devastating.

The weekend tour is a good way to whet your appetite for the road. It’s also good for exposing yourself to new markets without emptying the band fund. Let’s look at the steps for putting together a successful weekend tour.

1. Give yourself enough time to plan and promote

Effective planning is important. Sit down with everyone in the band and figure out when you want to hit the road. And give yourself plenty of time to organize things.

"The general rule of thumb for School Damage is two to three months," says Cabatan. "You want to have enough time to book a great venue, promote the hell out of it any way you can, and make sure the other bands are all up for playing it."

When you’re playing a town three or six hours away, it’s still on you to do some of the leg work to get the word out about the gig. Take to social media, share your band's recording, let anyone you know in the area know about the gig. But Cabatan says two or three months is the bare minimum for bands just starting out.

"If your band has never played the eastern United States, and you don’t have any contacts out there yet, maybe start booking a little bit more in advance of three months in case you need to talk to a dozen people before you land a good show. Generally, though, the more time you allow yourself to book a tour, the better."

2. Ask friends for help (and return the favor)

If you’ve never been to a certain city or town, it can be hard to know who to contact. Fortunately, if you’re a musician, there’s a good chance your friends know people in other areas who put on shows. "Ask [your friends] for help or see who they know in other cities that might be willing to put on a show for you," says Cabatan.

And if that fails, take to the internet. Look for bands or promoters in the area and send them a message. The worst thing that happens is they say no, but as Cabatan points out, people are often happy to help. "All music scenes are connected together by people like you who just want to see great music close to home. Send an email or a Facebook message. Make contacts, and gain friendships."

But if you’re ready to start asking for shows in other towns, be prepared to return the favor. The world works much better if people are helping each other. "Reciprocate shows that are given to you and help other bands out. This is how new talent gets injected into music scenes, and how bands who are just starting out are able to play places they never dream of going to."

Once you have a list of contacts, the next step is to start reaching out to them. This can sometimes be disheartening. It’s not uncommon for emails to go unanswered, Facebook messages to go unread, or phone calls to go unreturned.

Cabatan says the trick is to keep at it. "Be prepared to hound people for information and contacts. Be tenacious and follow up with people; they have no idea who you are, so you have to win them over. Sometimes, you’re just not going to get a response from someone. You just have to move on and hopefully that contact isn’t always going to be a dead end."

There’s nothing worse than making a nine-hour drive to play a show to five people for no money. Fortunately, that problem is easily resolved by planning your route properly. "We generally try to plan out a tour that makes sense for driving," says Cabatan.

He says every extra kilometer you drive is extra gas money and wear on the vehicle. You don’t need to put undue stress on your van or your drivers just because the only good shows you could find that night are a nine-hour drive from one another. "Go to Google Maps and route out the tour you’re planning," Cabatan advises. "Do the drives make sense? If not, you better go back to the drawing board before you start contacting promoters."

5. Make a name for yourself without oversaturating the market

The idea of touring is to try and build your fanbase. This helps your band get new fans, and you get to see new places and meet new friends. It’s a win-win on that front. But according to Cabatan, there's also a balance that needs to be struck. If you’re just starting out, you should play as much as you can wherever you can, but you also run the risk of oversaturating the market with your band.

"You want to find a great balance so that you’re constantly going out to new places and making a name for yourself there, while also revisiting cities you’ve been before to build on the fanbase you already have there. If you’re going to play a city once, you better try to go back there three more times; otherwise you’ve lost any momentum you might have built in that city."

6. Don't immediately sink the band funds into buying a van

Owning your own van may seem like a sweet deal. But the investment probably isn’t worth it out of the gate. Cabatan says if you’re just starting out, you should look into renting. "Owning a van comes with a lot of extra responsibilities and costs, [like] insurance, repairs, parking, to name a few."

Cabatan's band got its start using rental vans and car-sharing services. If you’re in a major city, chances are you can find some service to help you get from one town to the next. "These were invaluable to us when School Damage started out because they offered a relatively inexpensive way to gain access to a vehicle for a weekend."

Buying your own van is a decision that should be taken seriously. It’s a business investment and a tool of your trade. So don’t jump at the first opportunity you see. "I’d say if you’re on the road one weekend a month as a band, you’re probably ready to start doing longer tours, so you should look into buying a van then," says Cabatan.

[Quiz: How Long Could You Last on Tour?]

7. Weigh the risks and rewards

Student loans, credit cards, rent, mortgages. Everyone has bills to pay. So finding the time to take off work can be difficult. Some people use vacation time, others will take sick days, while others will just straight-up lie to their bosses. "It really depends on the job and your relationship with your boss," says Cabatan. "I’ve heard stories of bosses who allow their employees to take any number of days off to tour, and I’ve also heard stories of people who had to lie to their employers or call in sick just to play a couple of weekend shows."

Cabatan’s advice is to ask around. Talk to your coworkers and try to gauge what your employer’s reaction will be to you taking some extra time off. But at the end of the day, it’s important to do what makes you happy. "If it comes down to it, you have to weigh the cost of going out and doing your passion to keeping a steady income. For me, there will always be other ways to make money."

School Damage is currently preparing for the release of their debut full-length, Battered Lives, in May, and the touring that will follow. Cabatan couldn’t be more excited for what’s coming next. "Don’t let anything stop you from doing what you want to do the way you want to do it. It’s your life. Get in the van."