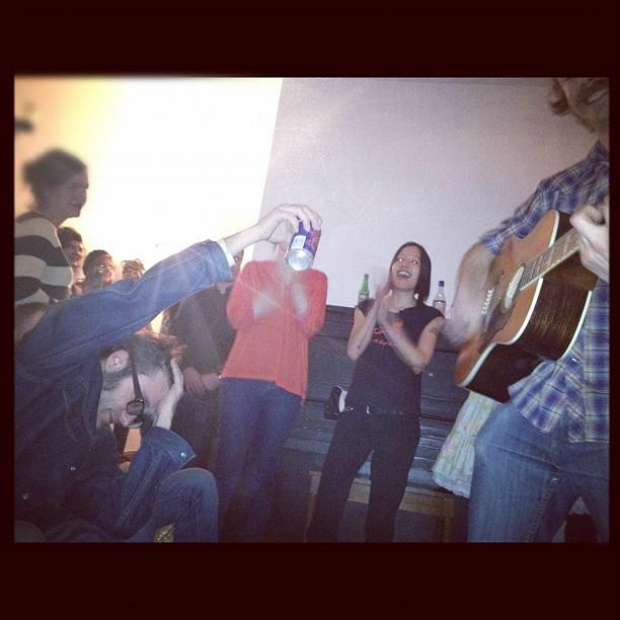 There comes a time for all bands when they either branch out or they stagnate. I mean, every small-town bar band has an origin, and for most of them, their path began when they decided to take the easy route and live large in their hometowns. Before they know it, their beer bellies have grown over their belts, their fans have all grown up to have kids of their own, and any chance they ever had of making a living off their talent has evaporated into the reality of a nine-to-five job. That's why it's important for new bands to branchout beyond their hometowns as soon as possible. Get your set together, get some merch made up, and see what the outside world is like. Buy, rent, or borrow a van. Beg other bands for their contacts. Whatever it takes, get on the road.

This isn't to suggest that every young band needs to embark on a three-month cross-country odyssey, but here are some reasons that stepping outside of your comfort zone is a productive and worthwhile endeavor.

If you play too much in your own town, you risk oversaturating the market. Playing every weekend is great for building up your chops as a live act, but you also run the risk of tiring out your fanbase. If your draw starts to dwindle, it's a good idea to think about playing shows in the next town over.

Look at a map, and check out the areas around where you live. Start in a circular pattern and grow wider. Once you've identified some places to play, get on the horn and contact the clubs and bars in those towns. Your guarantees won't be great at first (if anything at all), but if you keep hitting these places once every month or two, you stand a better chance of developing a local fanbase in those markets. Try and come up with seven cities or towns. That way, you can play each once every two months and not run the risk of wearing out your welcome.

People might come out to see you every weekend, but even if they do, they're only going to buy your record or T-shirt once. Maybe you'll get lucky and they'll buy another copy as a gift for a friend, but that's it. The more people who see that sweet new T-shirt design your super talented cousin drew for you, the more people are likely to buy it, and then hopefully you can buy your cousin that beer you promised him. For many bands, their merchandise is their chief moneymaker, so getting it out into the world increases your chances of covering your costs.

Making contacts in the music business has an exponential effect. If you meet a rad girl in Montreal who books shows, she knows dudes in Quebec City and Sherbrooke who can help you out down the road. If a guy puts you up at his house in Asheville, his roommate might run a small record label and could help you put out a seven-inch or cassette. Playing more towns increases your odds of meeting like-minded people who might also believe in your artistic vision and could help out out down the road. Just remember to always repay the favor when you can.

Touring is hard work. It's also one of the cornerstones to any successful career in music. So learning the ropes on a smaller scale can help prepare you for the longer tours in the future. A lot of problems pop up when you tour, and learning how to identify the issues and solve them quickly and efficiently while still being relatively close to home is a good idea.

Hopefully the folks you're sharing a van with are your friends, but the road is also known for causing breakdowns and breakups. When you start out small, you begin to see how the personal dynamics of your band work and how to deal with any issues. Every million-dollar musician started out somewhere, so look at your first forays into the outside world as a stepping stone to future success.

[Quiz: How Long Could You Last on Tour?]

The more you play, the better you get. Playing your songs as much as possible is key to success, but there's a big difference between practicing in your garage and playing out in front of a live audience. If you're practicing and the drummer misses a beat or the singer forgets the lyrics, you can stop and start again, but if you try that live, you'll be labeled as amateurs and the audience will use your set as an opportunity to refresh their drinks. Learn how to push through the mistakes.

Playing out helps with more than just your musical chops: stage banter gets better the more you're forced to talk on the mic, you know how much beer to take with you to the stage, and your setup and tear-down times get tighter, endearing you to whichever band is following you, as well as the promoter. The more professional you are, the better impression you make on everyone you're working with, and the more likely you are to get asked back.

People want to work with people they like, so if you impress a talent buyer, there's a better chance he or she will ask you to come back and open for the big touring band when they come through town. Getting in front of a live audience outside your hometown and away from your friends will make you better not just musically, but professionally as well.

Your friends are great. It's awesome that your mom and dad come out to every show. It's super supportive of your girlfriend to man the merch table while you're onstage. And they'll all tell you that you played great, completely ignoring the flat harmonies, the ungrounded amp, and the botched guitar solo. The strangers in the next town over aren't so nice. They've got no ulterior motives for telling you that you rocked or that you sucked. It can be hard to get honest feedback, but ultimately, it'll help you grow as an artist.

Everyone loves a good road trip with their pals. The fact that when you reach your destination you get to set up your gear and play your hearts out for a bunch of potential new friends makes it that much sweeter. Hopefully you started a band because you're passionate about music, so take that passion on the road and see what you find. Even if you don't find riches and fame, there's a good chance you'll have some experiences that you'll always cherish.