7 Tips for Covering the Right Song at Your Next Show 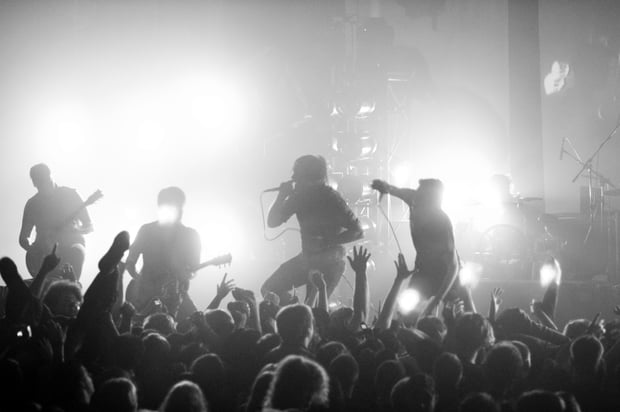 Playing cover songs is a classic way for bands to connect with their audiences when they play live. It's a great way to add depth to your repertoire while showing fans some of your favorite songs or influences. But covering songs isn't something to take lightly. Picking the wrong song can have the same effect, just in a negative way. That's because a cover song is like a band's atomic bomb: used wisely and sparingly, they can be very effective, but one false move, and you can scatter the crowd faster than an air-raid siren. These seven tips can help you choose the right song for your next set with a minimal risk for cover-band fallout.

1. Ask yourself why you're covering a song

A band’s motivation for covering a song can come from many different places. Some people might feel compelled to show off their musical skills through a difficult song choice, while others might choose to play a song as commentary on a situation. Sometimes, covering a song is a business choice more than a personal one. Overall, it's important to choose a song that makes you feel happy and benefits your band by adding depth to your repertoire.

2. Find a song the majority of the band knows well

There's no group of musicians that shares the exact same influences. Because of this, when it comes to suggesting possible artists or songs to cover, it can be beneficial to choose familiarity over obscurity. Not just for your audience, but for your band. It’s hard to teach someone to share the same passion you do for a song. Instead, try to find a middle ground. This will not only make learning the songs easier, it'll also increase the likelihood that everyone in the band retains interest in the project and maintains the enthusiasm needed when performing.

3. Learn a song that isn't too obvious

Cover songs work best when there’s an element of surprise. This surprise can come from its familiarity, its popularity, its randomness, its obscurity, or its contradiction with the band’s set. That means it's important to choose a song that isn’t too familiar or played out. Basically, it shouldn’t be a super-obvious song, unless that's supposed to be the point.

4. Take a song and make it your own

The success of a cover song isn't only dependent on its origin; it's also crucial that the band takes ownership of the song. Changing the song slightly, jamming on the arrangement, or adapting a song to an entirely different style is great way for bands to make a song their own.

5. Pick a song the crowd will recognize with a positive reaction

While covering a song is a great way for a band to share their influences with their audience, choosing the wrong song at the wrong time can leave an unwanted negative impression. If you're choosing to cover a song to show off or prove a point, you're most likely covering a song for the wrong reasons. Ideally, covering a song should create a positive crowd response through the song’s familiarity. The crowd recognizes the song, the song is being played well, and everyone has fun. If there's an ulterior motive, you may impress some people but leave the majority of the crowd feeling dissatisfied. While the band might be having fun, the audience might not understand the choice of cover, or the song might not fit the rest of the band’s sound.

6. Choose the right place in your set for maximum impact

Choosing the right set is crucial to putting on the best performance you can in any situation. Within that is the importance of where the cover song is placed. There are no hard-and-fast rules about this. That makes it all the more important to put extra effort into feeling out the perfect place in your set for the cover. The rewards are great: extreme crowd reaction, artistic statement, and the thrill of playing something awesome. All this and more can be had with the careful placement of a carefully chosen song.

7. Play the song to the next level

Because covering a song is generally considered a statement, the act of covering a song cannot be taken lightly. Besides all the motivation and timing, the actual performance must take the song to a place that it might not have gone previously. A cover song isn't going to excite the audience if it's played flatly or imperfectly. While performing the song, you should be striving to outplay and outperform the original performers. This intensity and commitment to the crowd will give you a better reaction and seal the deal on your commitment to your craft.