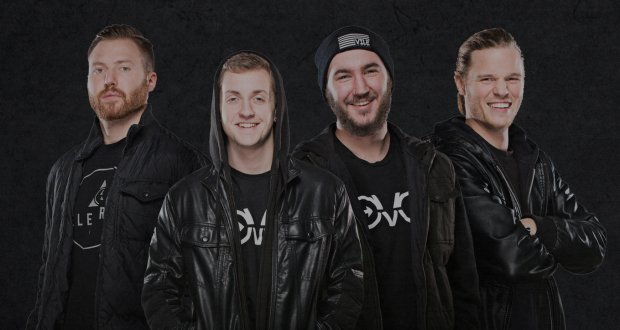 We've seen viral covers on YouTube time and time again. From Pomplamoose's timely cover of Beyonce's "Single Ladies" to Pentatonix's a cappella Daft Punk medley, the cover strategy has become a standard in the music industry. But what makes a viral hit? Sometimes it can seem completely random when unknown bands rise through the ranks with a multi-million-view cover out of the blue, but let's take a closer look at what's really going on.

I Prevail is an unsigned post-hardcore band that released a cover of Taylor Swift's "Blank Space" (embedded below, if you want to check it out) on December 1, a little more than a month after Swift released 1989, and by January 15, they were charting on 24 different Billboard charts. The cover by this previously unknown band soared to #1 on the Emerging Artists Chart and even managed to break the Hot 100. To date, the video has over six million views and is the seventh most-watched cover of "Blank Space" on YouTube.

Unfortunately, there isn't anything you can do to guarantee a hit cover on YouTube, but there are certain things you can do to dramatically increase your chances. Whether or not you dig their cover, there's no denying that I Prevail nailed every single one of these points – so take notes!

1. Show up in search

YouTube is an extremely powerful artist discovery tool, but it's primarily based on search. Therefore, the first key element of the YouTube cover strategy is making sure you show up in search. This means covering popular songs that lots of people are looking for and using relevant keywords in the title in order to reach an audience of new potential fans. As an independent artist, very few people are seeking out you or your songs, so if you want to get in front of them, you need to become what they're searching for.

There were plenty of other popular songs, but when 1989 was released last year, it took the music world by storm. These were the songs to cover, even a month after its release date. I Prevail didn't record the first cover of "Blank Space," but they were still able to jump on the bandwagon while it was still hyped.

Their video title, "I Prevail - Blank Space (Taylor Swift) - Punk Goes Pop Style Cover," is on point. They include the song name, the artist's name, and their name. By adding "Punk Goes Pop Style Cover," they pique the viewers' curiosity. Those who know the song – which is pretty much everyone – will wonder how such an upbeat pop song converts into the punk genre. This probably grabbed them even more views.

There are literally thousands of musicians out there releasing covers of popular songs on YouTube as you read this, so the best way to stand out is to create a new and fresh take on the song. Not only will this get people to click on your video, but if you do the genre-bending well, it will keep them watching the whole thing.

[Learn more: 5 Easy Ways to Spice Up Your Cover Songs]

On top of that, covering a song that isn't typically associated with your genre can put you in front of a completely different audience – one that you never would have reached before. In this case, I Prevail, a post-hardcore band, was being found by pop fans. This probably ended up at least doubling the size of the audience, leading to more views. The key here is to choose an audience who can still relate to your style of music. Their original music still has some catchy elements, so many pop fans can still enjoy it. On the contrary, if a death metal band covered "Blank Space," they probably wouldn't have gotten the same kind of interest from the pop fans.

3. Don't skimp on the video and audio quality

Once people find your cover video, you want to make sure the quality is there. We're all guilty of clicking right off YouTube videos if they look sloppy or have bad audio – you don't want that to happen to your video! Luckily, it's easier and more affordable than ever to capture high-quality videos. You can get very good video cameras for just a few hundred dollars, and free video editing software can accomplish everything you need to put together a professional-looking video.

I Prevail's cover video doesn't have ground-breaking cinematics – it's all just different shots of the band performing in the studio. The editing makes the visuals more interesting as it cuts between the different band members' performances. If you have the creativity in your interpretation of the song, you don't need any flashy visuals, screenplay, or special effects.

What you really want to focus on is your audio quality. If you look at the description box of I Prevail's "Blank Space" cover, you'll see that the band members did all the filming and editing, but they went into a studio to record the audio.

There have been plenty of bands that got one viral cover video and then disappeared. Their success just didn't translate into their other videos and didn't convert to album downloads and sales. For the most part, it's because they didn't give new viewers the opportunity to engage further. Essentially, they didn't take all these new impressions and convert them into fans.

The YouTube description box is a great tool to drive viewers to more engagement. You can add more information, messages, and most importantly, links to download the song, visit your website and social media channels, and buy your album.

When adding information to the description box, go from the most relevant links to the least relevant. Include the link to buy or download the cover song at the very top of the description box with a link to buy your album right underneath. Then add your website and social channels last. If you head over to I Prevail's video, they did exactly that.

Having those links in the description box is great, and you'll definitely get some people opening it up and clicking through, but it's still a very passive approach. Instead of this, I Prevail actually got on camera as a band after the video, thanked everyone for watching, and asked them to check out their original music as well.

This is probably the most important point of this whole article, and most likely played a big part in their EP's rise on Billboard charts. The album, Heart vs. Mind – which doesn't include the cover – peaked under 10 on the Billboard Independent Albums, Hard Rock Albums, Alternative Albums, and Top Rock Albums charts. As you can see, simply asking someone to do something greatly increases the chance that they will actually do it.

Again, there's no way to predict what will go viral, but doing everything above will definitely increase your chances of getting noticed. In the New Artist Model online music business courses, you'll learn how to turn your music into a successful business – a business where you’re the CEO! You'll create an actionable and personalized plan that will help you achieve a career in music, and you'll be able to do it all with the resources you have available right now. If you'd like more strategies like these, you can download this ebook for free. It'll take you through some of the best strategies for indie musicians to help you grow your fanbase and your career.