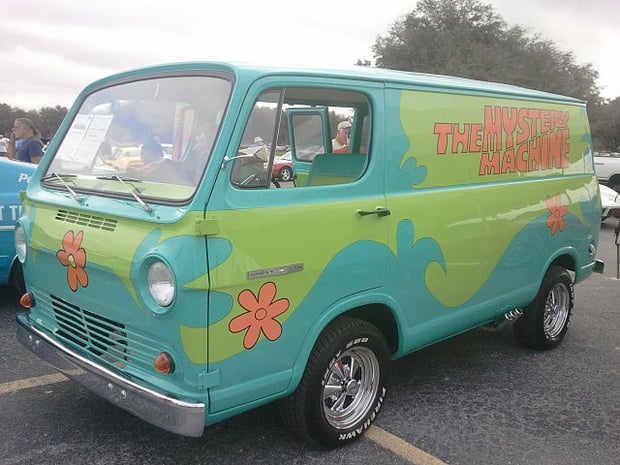 You’d be hard pressed to find a more helpless feeling than returning to your van to find all of your gear stolen. Sadly, this is something that happens to artists on a regular basis. Heck, sometimes thieves don’t stop at just the gear, they’ll take the entire van.

Before he’d become a victim of van theft, indie singer-songwriter Chase Huglin shared a sentiment many artists have: “I felt like this was something that would never happen to me.”

It happened, however, as Huglin and his tourmates at the time, Sundressed, woke up to find their U-Haul trailer was no longer attached to their van. Zach Schwochow, drummer of the Christian metalcore band Convictions, experienced a similar incident – except the thieves didn’t just take the trailer, they hot-wired the van and drove off with that, too.

Jeff Rosenstock, a solo artist who’s fronted a number of bands, remembers a van-theft incident where everything from his gear to his clothes were stolen.

Van theft doesn’t just happen while artists are sleeping, however, as Matt Owen (now of Andy Frasco and the U.N.) found out when he was touring as the frontman of Matt Owen and the Eclectic Tuba. During a quick trip into a venue to speak with a talent buyer and get the rundown for the night, his van was hit by electronics thieves. “In the 10 minutes that I was gone, someone had smashed my window and stolen my hard drive with three years' worth of studio recordings, my iPad, my projector, and my MacBook Pro.”

Some of these stories had happy endings. The police recovered Convictions’ van and trailer, although the former was a little worse for wear. Owen, with perhaps the wildest story, had the police use the “Find My iPad” service, and not only did they find all of his stolen belongings, it led them to a small electronics shop that had been running a crime ring built on electronics theft.

On the flip side, Huglin, whose van theft incident occurred back in January, has yet to hear any good news from the police, nor has Rosenstock.

Having gone through these experiences, these four artists now take extra precautions when they tour, and they shared some of those precautions with us in the form of tips for making sure you don’t become a victim of van theft.

1. Park with a purpose

Not all parking spaces are created equal. “Park in a well-lit area as often as possible,” Huglin explains. “If you stay at a hotel, try to make sure the van is as close as possible to your room, or the front desk if the room option isn’t available. If you can find a spot to back your trailer up to and it’s against a wall, you got a real winner.”

2. Build a cage for your gear

A cage for your gear is like an added layer of protection. Rosenstock says, “If I ever get another van, that’s the first thing I’m doing.”

It doesn’t matter how much of a hurry you’re in – make sure nothing of value can be seen in your van. "Pack tight and neat for tour, so that everything valuable that you own can be carried inside of the venue while you’re away from the van," Owen suggests. "If possible, stow things under the seats or in storage compartments," he adds. "Never leave anything out in the open or on the seats. Smash-and-grab robberies happen only when the thief can see what he’s after."

Once you arrive at wherever you’re going to be sleeping, Huglin advises that, for as much effort as it may take, bring anything of value inside with you. “The cash box and any expensive instruments or amps must come inside before you call it a night.”

Lock up as many things as possible. Even if your doors are locked, your equipment is locked up, and you have a lock on your steering wheel, Owen notes you still need to padlock your trailer to your van. “The most painful and detrimental kind of band theft is when someone just snatches your trailer off the hitch and drives away with everything.... Make sure it’s secure and would take an act of God to separate the trailer from the van.”

At the show right after Rosenstock had all of his gear stolen, he remembers, “Stefan [Babcock] from PUP, who we were touring with, came up to me and said, ‘PUP’s buying you a puck lock.’ One morning while we were snoozing, Stefan took the keys to our van, went to a mechanic, and got a puck lock installed.”

If you can afford to go the extra mile, Huglin notes that DeWalt makes a lock that also has a GPS locater and alarm. “You can set the alarm from your phone or computer, and have as many devices set up to be notified as you want if it’s set off. It will last for 30 days on a full charge, and can either be set up using magnets or by being bolted on.”

5. Hide GPS trackers on your van and trailer

You may have visions of Mission Impossible or Sterling Archer come to mind when you read that, but it makes a lot of sense. Schwochow says that ever since Convictions had their entire van and trailer stolen, “we have some GPS trackers hidden.” So even if someone succeeds in hot-wiring their van again, it will be easy to track down.

Normally, you hate to see a boot on your car, because it means the cops have nailed you for a whole bunch of parking tickets, but knowing that a boot completely prevents you from driving anywhere, why not use that to your advantage when you’re touring? Huglin says, “I’ve had friends purchase and travel with a boot to put on a tire when leaving the van/trailer unattended for the night.”

This seems like common sense, but when you’re in the midst of a long tour, sometimes loading and unloading can become so routine that you forget the basics. “When loading/unloading, always have one guy who stands and watches everything,” Owen explains. “Tons of stuff goes missing if you’re loading up after a show, and there’s a crowd of 400 drunk people floating around the trailer.”

Sometimes you have to go the route of Matt Foley, motivational speaker, and live in a van down by the river. Okay, you don’t have to be down by the river, but Schwochow says his band now has a rule that at least one person sleeps in the van at all times. You should, obviously, rotate which member is stuck in the van.

Of course, even if you follow all these steps to keep your equipment and van safe, there’s still a chance a criminal can make your life difficult. And with that in mind, in case everything fails, and the proverbial shit hits the fan...

“Gear insurance is one of the most important lessons I’ve ever learned,” Owen explains. “It’s a lot cheaper than you think, and it’ll save your soul one of these days.”

Note that Owen specifically said “gear insurance,” as having the correct insurance is key. Rosenstock found this out the hard way. “When I got home I found out our car insurance refused to cover anything. In fact, they dropped us because they said we needed commercial insurance after the incident. There’s musicians' insurance out there if ya Google it.”

With your gear insurance in hand, and following this list of eight precautions, your next tour should be your safest tour yet... at least for your equipment.