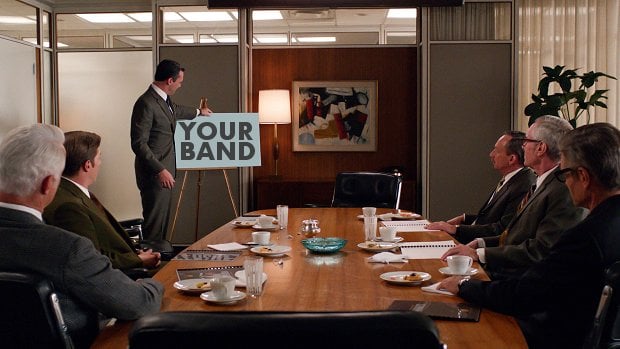 The media has come calling, and you can’t wait to tell your band’s story over, and over, and over again. Who cares if you sound like a broken record – any press is good press, right? Wrong. It's true, you could have much worse problems. But think of it this way: If you saw an article about your favorite band (or actor, or comedian, or whatever), picked it up and dove in only to find the same anecdotes you’ve read a dozen times, you’d be disappointed and might even toss aside the whole story. Look at each media opportunity as a way to attract new listeners and draw your existing fanbase even closer. Here's how to tailor your band's story to maximize your chances of getting picked up by five types of media outlets.

Nearly every city has a newspaper, and your hometown paper is especially likely to be interested in your band. Identify who writes about music for the paper, and connect with them in the weeks prior to your album’s release or your next big show. If this is your debut work, the writer may be interested in a general profile. If you’re a music veteran who has released multiple albums, the writer may instead be interested in what’s different with this latest work. What were your influences? Did you record somewhere new? Be prepared with an idea that goes a step beyond, "Hey, this band has a new album coming out." Chances are, you’re not the only ones.

Example: St. Paul and the Broken Bones were building buzz before the band’s debut album hit. Mary Colurso of the band’s hometown newspaper, The Birmingham News, offered readers insight into the band the week before the album dropped.

If you’re in a medium-sized to larger city, it’s likely that there’s a lifestyle magazine covering your area. (Unsure? Try looking up "[your city name here] magazine," or visit citymag.org for an extensive directory of city and regional magazines.) These periodicals often plan stories significantly farther in advance – often three months or more before publication – so don’t waste any time making contact. Once you’ve got dates set for your next CD or big event, reach out. And don’t make the mistake of thinking that a monthly, bi-monthly, or quarterly magazine isn’t concerned about news value. Just because news isn’t in the name, these publications are still hit up with dozens more story ideas than they can publish. Give them a reason to choose your band as opposed to any other.

Offer them an angle a daily or weekly newspaper isn’t likely to have time to cover because of deadline pressures. For example, if you’re recording locally, invite the reporter to conduct the interview in the studio, where he or she can also observe the process. That background will enhance the finished product in a way that a telephone interview simply can’t.

Example: The very act of spending time with Paul Janeway and Browan Lollar of St. Paul and the Broken Bones became the story when I profiled the band for Birmingham magazine.

These publications are often willing to take chances that other media outlets won’t. Does your band regularly hang out at the neighborhood bar till 2:00 a.m. following practice? Has your lead songwriter been aching to write an edgy essay about how the band’s lyrics relate to the political turmoil of the day? You may find the fit at an alt weekly.

Example: After the band’s album was released and they’d had time to live up to the hype, Weld for Birmingham opted for a straightforward profile of St. Paul and the Broken Bones – and it worked. It was a different approach than other area media outlets took at the time.

Locally produced television and radio shows are under constant pressure to fill time, and that’s where you come in. Offer to not only show up for an interview, but also play live in the studio. Yes, sometimes it can be a hassle to drag instruments there (especially if you’re a drummer!), but the exposure is worthwhile. Look for opportunities to create a slightly different experience than your regular onstage show, and you’ll up the ante even more. Perhaps your percussionist could substitute an egg shaker, tambourine, or djembe for a full drum kit. Maybe you’ll ditch the electric guitar and play a stripped-down, acoustic set. That could make your life easier, but it’ll also leave the audience wanting even more.

The web offers opportunities that other media often can’t. Think of sites such as Daytrotter and Black Cab Sessions, for example. Why not emulate these approaches by filming a performance in an unusual location? It’ll certainly leave readers with a taste of what you have to offer.

Carla Jean Whitley is the author of Muscle Shoals Sound Studio: How the Swampers Changed American Music and managing editor of Birmingham magazine in Birmingham, AL. She has written about music, especially Alabama bands, since 1999. Connect with her at carlajeanwhitley.com.