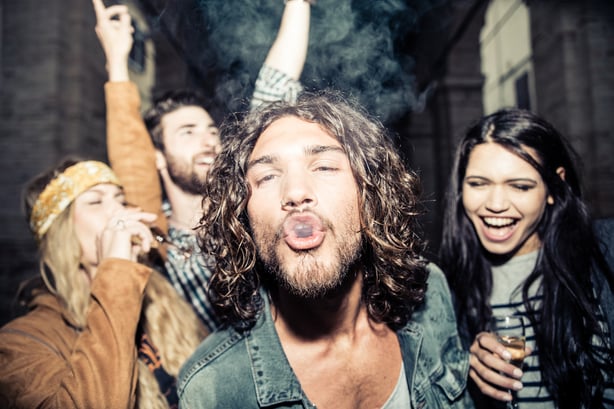 You’ve heard the theory: “Smoking weed helps you make better music." But is there any validity to that? Is it just a theory, or can we call it a fact? Read on.

I conducted a very sophisticated survey via Reddit, asking people, “Does smoking weed help you make better music?” There was a wide range of responses, so below, I’ve listed the responses that best represent the overall sentiments.

(One of my favorite responses: “Smoking weed will help you write songs that people who smoke weed will like.”)

What about the great songwriters and musicians who toked? I feel like their opinions on this matter carry much more weight than anonymous people in an online forum (nothing against Redditors).

In the book Songwriters On Songwriting, Paul Simon answers the question, “Did you feel that smoking pot got in the way of your best work or did it ever help?”

His response was actually pretty middle-of-the-road.

“I would say that it probably doesn’t make any difference. There’s a temptation, and a desire even, to be able to expand your imagination....And I think sometimes [pot] produces some kind of creativity that wouldn’t be there if the chemical wasn’t there. And sometimes it produces nothing. Except the feeling of creativity, which is not the same as creativity.”

He went on to say that he’s made music high and sober. He says pot won’t give you anything that isn’t already in you, but it may (or may not) help you get it out.

This is similar to what Bob Marley said about lighting up: “When you smoke the herb, it reveals you to yourself.” And songwriting definitely involves knowing yourself more and putting yourself in your songs.

So, I don’t know if you can prove the cause-and-effect of weed on the creation of good music, but you can definitely make the correlation.

Finally, and maybe most importantly, we turn to science.

Dr. Alice Weaver Flaherty is a neurologist at Massachusetts General Hospital and professor at Harvard Medical School. She specializes in deep brain stimulation and how the brain and creativity are related.

“Marijuana is a stimulant,” says Dr. Flaherty. “And most stimulants, in the short term anyway, boost output of all kinds,” including creativity.

However, she says a person can have too much or too little pot to have any affect on their creativity.

“Somebody who’s trying to boost their motivation to be creative very often goes too far and gets themselves totally wired so they can’t concentrate,” she says.

“A very anxious creative person may get some benefit from cannabis,” she continues. “In calming them down, it could help their creativity. But for someone who’s already in the zone, and who’s not too anxious to work, it might push them into a place of being too laid back.”

So what does science say? Well, it says Mary Jane could help you make better music, but it’s not guaranteed.

Final word: Does being burnt light your music on fire?

It seems like, looking at both the anecdotes and the science, marijuana can help you harness the creativity that’s already inside you. It can also make you too high-strung or too laid back, depending on your default demeanor and how much pot you consume, to create efficiently.

So when asking, “Does weed help you make better music?” it seems the answer is “It can, but it’s not guaranteed.”

Pot isn’t a songwriting shortcut or a life hack for the musician. Hard work and practice seem to be what power the train, whether or not marijuana comes along for the ride.