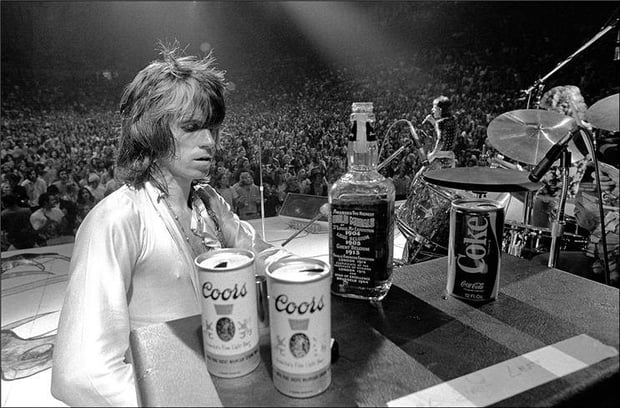 Inevitably, alcohol ends up becoming a part of many musicians' lives regardless of you, yourself, consuming it. Many gigs take place in clubs and bars, and in many circles, drinking is a firm part of the culture and the ritual of the arts. Whether you're a drinker or not, it's there all around us, from the image of the whiskey-swigging rock star to the artist-endorsed and -owned brands (looking at you, Diddy!). It's ingrained in the culture. And as we all know, either from personal experience and "research" or from the literature we get supplied with at a relatively young age, as one drinks, inhibitions go out the window, as do coordination and fine motor skills (and eventually, the not-so-fine motor skills) along with a plethora of other short-term side effects that tend to lead to a miserable morning after.

One effect that has recently gotten some attention and continues to be an issue of study is alcohol's effect on hearing itself.

Staff from the Royal National Throat, Nose, and Ear Hospital and University College London Hospitals published an interesting study in 2007 regarding acute hearing loss while drinking. If you want the SparkNotes version, a study was done of 30 men and women between the ages of 20 and 40 years old. These 30 people were given the equivalent of "a few drinks"; none of them were outright wasted, and in fact, all of them would have been well within the legal limit to operate a motor vehicle in most parts of the world during the test. The subjects were then given a hearing examination to compare to their baseline hearing, and the results were certainly surprising: all subjects showed significant acute hearing loss. To see it visually: 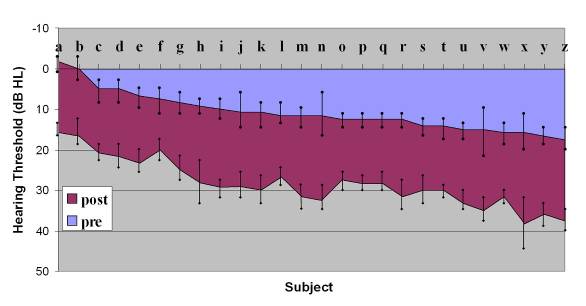 The mean hearing loss in decibels for each frequency tested:

As you can see, even a relatively small amount of alcohol had fairly significant impact on the hearing response of the subjects.

Is this going to be forever?

The medical community is still somewhat undecided on this one. Alcohol abuse definitely has an impact on the auditory system, but how and how much depends on who you ask.

As we age, we tend to experience a certain degree of hearing loss, so attributing how much of that loss to age/exposure to high sound pressure/alcohol is a bit hard to track. There are also two different schools of thought on this, one being that alcohol damages the auditory nerves' ability to effectively do their job, and the other is that considering alcohol's effect on the brain, it's more likely that the brain is no longer able to interpret input to the central auditory cortex appropriately. Either way, there's no debate that long-term heavy alcohol use will affect your hearing.

So, now that I've sufficiently been a buzzkill, should anyone serious about audio, music, and their hearing cease to consume alcohol? It doesn't necessarily change the fact that consuming in moderation is a good practice. More importantly, it just goes to prove that you should think twice before drinking and mixing. (Man, things sound so much better with alliteration. No wonder "don't drink and drive" sounds so catchy.) Live or in the studio, anytime you need to have your auditory wits about you, you should probably take it easy.