Never Leave for a Gig Without Bringing These Backup Items 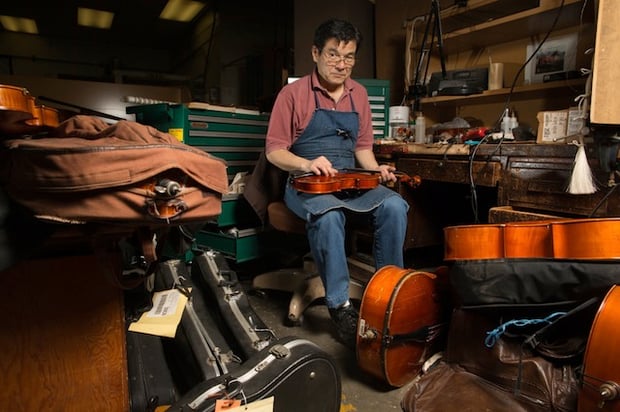 Don't let the stage turn into your own instrument repair workshop. (Image via scpr.org)

It blows my mind how many bands leave the house to play an important gig, and end up having a crappy set due to small gear malfunctions. Some might consider me to be hyper-paranoid, but I always bring at least two of just about everything to every gig. Even if the part that malfunctions is a simple fix during a set break, you don't want to be the person who forces the band to take an early break so you can put a new string on or scavenge for another pair of drumsticks. This is especially true if you are a sideman – good luck getting called back if you single-handedly make a mess of a gig that the bandleader spent a lot of time (and possibly money) putting together.

I've got a few key pieces of gear that I bring backups of to every single gig without fail. If I were you, I'd never leave home without backups of the following.

No matter what you play, you've got to have something around to cover you in case of instrument failure. Strings beak, electronics like pickups and microphones could fizz out or run out of battery life, and drumheads are subject to breaking if you play hard or haven't changed them out in a long time. Again, easy fixes can be taken care of during your set break (if you have one), but you certainly don't want to have to delay a set that's already in progress.

If you play guitar or bass, this means bringing a backup guitar or bass. For drummers, bringing two drum sets is obviously a huge hassle, but bringing along an extra snare is always great insurance and a fairly easy burden. Even if you're only singing, it would behoove you to always carry an SM58 or similar microphone in your bag if you’re unfamiliar with the venue you're playing; the house PA gear could be absolute crap, and you might find that a quality microphone that you know is 100 percent operational can save your life. Even if your only option for a backup instrument is crappy, it's better than not having any insurance at all. Plus, this will give you the option to change your sound from song to song and keep the set interesting!

Just like instruments, there's always a risk of whatever you use to amplify yourself going down in the middle of your set. Especially if you're a guitarist/bassist who plays through a tube amp, there are a lot of tricky moving parts that could cause you grief, even if your stuff is high quality and you maintain it well. The power in the building might surge and blow a fuse, for example. Or perhaps somebody bumps your amp and it takes a tumble, breaking one of the tubes or circuit boards inside.

One solution is to just bring a backup amp, something sturdy that could survive getting thrown out of a moving vehicle on the highway. I used this method for years. It doesn't need to be a carbon copy of your big rig; there are a lot of really cool, great-sounding, lunchbox-style amps on the market today that will get the job done while easily fitting under the front seat of your car. Check out amps like the Orange Tiny Terror or the ZT Lunchbox if you're a guitar player. If you're a bass player, check out some of the small models that Ampeg has been putting out lately. If you're a singer, it might be a very good idea to look into some of the portable PA systems that are on the market as well; many of these are incredibly transportable, affordable, and will take care of business should you show up to the venue and get surprised when they ask you if you brought your PA. Plus, everybody loves a singer who actually owns his or her own system!

If you don't want to deal with dragging two amps to every gig (I got tired of it after a few years), there's another option: having the equipment to get a good sound running straight into the board. This is the method I use now. There are lots of small-footprint amp modelers on the market right now that can fit right onto your pedal board and can be used in a pinch if your amp goes down and you need to run straight into the PA. Tech 21 builds some great pedal-sized amp modelers, as do the folks at Joyo (if you can't put out the cash for a Tech 21). I personally use a very cheap Behringer Ultra-G DI box that has a 4x12 cabinet modeler build in, and I find that it takes care of business just fine and should work for just about any instrument that you'd typically run through an amp.

This should be a no-brainer, but I've seen an unfortunate number of bands have their set ruined by a small, faulty accessory. Make sure you've got extras of everything. If you play guitar or bass, don't leave home without at least a few extra picks, strings, cables, straps, capos, tuners, batteries… basically any small part on your instrument that could be prone to failure. If you play the drums, bring along extra sticks, heads, drum keys, floor tom legs, bass drum beaters, etc. It's the little things like this that are the easiest to forget or neglect to bring, and it's these very things that are the most likely to screw up a great set.

I'd recommend that everybody in the band has his or her own toolbox and a checklist to accompany it. Every time you head out to a gig, go down your checklist and triple check that you've got extras of all the little parts you could possibly need. Even bring extras of stuff that you won't necessarily be the one using! One of my best drummer friends, for example, brings along all the typical drumming gear, but also stashes a few cables, picks, and straps into his toolbox in the event that somebody else in the band doesn't have the same foresight. Naturally, he's very well liked.

There are a few non-instrument-related items that are good to have with you in your toolbox at every gig as well. Does anybody in the band have first-aid supplies handy, for example? If somebody takes an unlucky spill in the middle of the crappy dive bar you're playing in the middle of nowhere on tour, you'll want to have some stuff handy to patch up any bumps and scrapes, since the venue might not be so kind.

Backup supplies for your car should also be something you think about. Always try to have extra oil, transition fluid, water, gas, light bulbs, and tools stashed in your car. Small breakdowns on the way to the gig don't just happen when on tour! I've had my car crap out on me on the way to local gigs before, and have had to have somebody in else in the band go way out of their way to come and rescue me. Try not to be that guy! Again, even if you never need to use any of these things, somebody else in your band might someday. Be the one who can lend a helping hand!