How to Command the Room's Attention at Your Next Gig 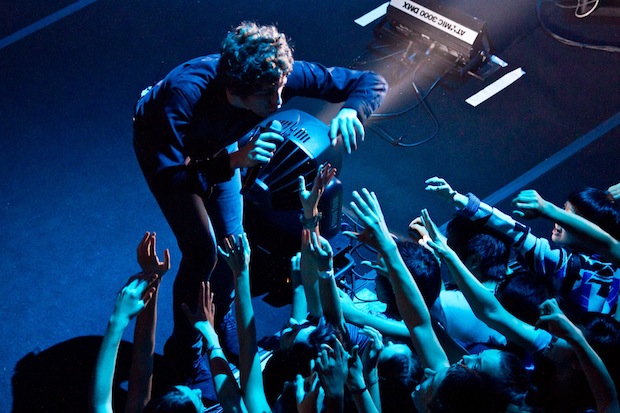 British rockers the Kooks know how to make a crowd go wild. (Image via feveravenue.com)

As a performing musician, we know you don’t want to play to just any random group of people. You want to put on a show for an enthusiastic, shouting, dancing, head-bobbing (or whatever behavior your kind of music calls for) crowd. You're not guaranteed to play to a crowd that already knows and loves who you are, so they might need some convincing that your act is worth paying serious attention to.

Unsure how to make the crowd totally enraptured by your presence? It may seem daunting, but it's far from impossible. Read on for some tips on how to command the attention of any room, so you can make some diehard fans.

1. Do everything with visible confidence

If you suffer from a bad case of stage fright, mumble into the microphone, and stand frozen on stage like a statue, people will perceive you like you don't even want to be there. This is one surefire way to put people off. Own your presence on stage, speak like you're meant to be there, and give the impression that you're dying to put on one hell of a show for the audience.

If you're genuinely nervous – which is nothing to be ashamed of – the adage "fake it 'til you make it" applies here wonderfully. You'll be surprised at how much your emotions will actually follow your actions. Even if it's your first-ever show, own it! Tell the crowd to get excited because they're experiencing your first performance. Never apologize for who you are.

Making eye contact with your audience may seem like a small, fairly obvious detail, but it begets mentioning because of the sheer power it contains.

Its benefits are twofold. First, just like in any heartfelt conversation, making eye contact strengthens the emotional connection being made. It implies intent and sincerity. Second, it allows listeners who are far from the stage to be drawn into the performance and forget about the distance.

When you're so focused on the music, closing your eyes may keep you in the zone, or you may be the kind who tends to stare straight at the floor or ceiling. But if you don't take just a few seconds to lock eyes with each member of the audience and show you're playing for them, you'll lose some of that emotionality that's so key to an impactful show.

3. Play your heart out

This should be a no-brainer, but unfortunately, not all performers follow this simple piece of advice. Maybe you've had a rough day; something is weighing heavily on your mind. You're bound to feel "off" at one point or another – but once you get on stage, it's absolutely crucial that you push past all that and perform with every fiber of your being. You should be exhausted in the best way possible at the end of your set because you just put all your energy into giving a fantastic show.

This not only excites a crowd, but also makes people notice you. I know I've had that experience where a previously unknown opener stole my heart by the excitement and passion they exuded, causing me to remember them and look them up after the show.

4. Give some love to your audience

While playing passionately is one of the best ways to show that you appreciate your audience's presence, you should be verbalizing it as well. Seriously, thank people for coming out, no matter how big or small the crowd may be. An honest blend of confidence and gratitude creates the perfect image: people are impressed by your performance and will like you as a person. Care about how your audience is doing, ask how they're feeling, and leave just a minute or two for some chatting so the audience feels like they're not just watching you, but having an experience with you.

Bonus points for complimenting the city you're playing in, namedropping a local site you loved, or telling a fun anecdote relevant to the area. People love repping their home turf, and it will feel more personalized if you can talk about it.

5. Own the moments of silence

There's a phrase you may have heard that goes, "Music is the silence between the notes." Whatever your interpretation of that may be, there's something to be said about silence being just as powerful as sound. Your first instinct may be to consider pauses between songs as awkward and something to be rushed through, but there are interesting, even mesmerizing, ways to take advantage of silence.

Before your set even begins, take your time getting on the stage, preparing whatever you need, and setting up your place. If you like performing on a stool, place it on stage in a quiet, meaningful way. If you need to switch instruments or tune something between songs, don't feel the need to apologize and ask for "a few moments, please" – just do what you have to do and show comfort in those "in-between" moments. It will both give the audience a few moments to internalize and appreciate your art, and build anticipation for your next song. Silence can create a magical atmosphere if it's purposeful, not awkward and rushed.

While there’s nothing wrong with having a “clean” set where you go by the book and play well without stepping too far out of your comfort zone, it will be lacking in memorability, which is the key to converting strangers into fans. What you can do will vary depending on your music and the venue. You could hop off the stage and sing as you stroll through the crowd, you could find that one fan who knows all your songs and bring him or her on stage, you could cover a much-loved song with a twist – anything, really. The point is that you do something memorable that sticks out in the listener's mind even when you've left the stage.

Be careful not to confuse this with being unstable and, especially, irreverent. This tip does not mean "get drunk before your set and see what happens!" or "show your wild side and break the venue's rules." Case in point, I recently saw an opener whose singer took out a cigarette and started smoking during the band's set at an outdoor venue that had an explicit no-smoking policy. It was a small distraction, but its brashness really put me off.

Hopefully this cursory list has given you some inspiration for really catching the audience's eyes and ears at your next gig. If you're starved for more performance tips, you can delve into how to make your live show an experience and also explore ways to leave a lasting impact on your fans. Now, start planning to wow your next crowd!