How to Keep the Momentum When Your Bandmates Are Dragging Behind 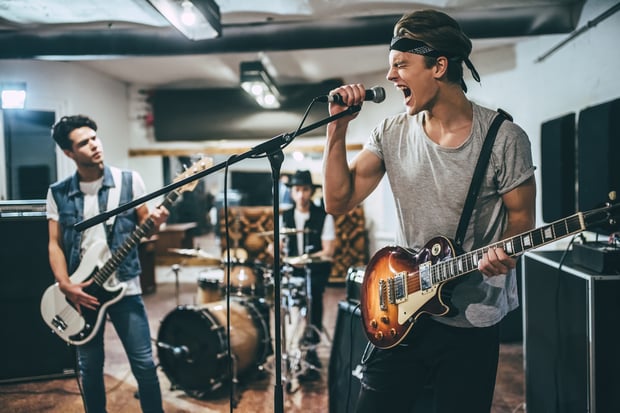 It’s hard enough being a DIY musician with all of the hats you’re required to wear to build your career. But when you add in other members to your band who each have their own goals and motivations for building a career in music, things can get complicated.

For most, their band is more than a team — it’s a family. Music is built on emotion, and a group of creatives making music together will inevitably create an emotional minefield. It only takes one member to throw the entire group out of sync.

How can you avoid one band member’s personal life from bleeding into and halting the professional progression of the group?

Below are three common scenarios that often lead to inter-band turmoil and delays on new music being released along with ways to avoid and/or overcome these situations without completely throwing in the towel.

1. A member’s illness or familial issue

What happens when a member of the band is going through a particularly rough time? What do you do if they become too sick to perform or if they have to attend to a dire family situation, such as a terminally ill parent or a child who needs their full focus and attention?

Sometimes there are things beyond our control and when a band member has to put their health and/or family first how can the rest of the group be supportive while still staying focused on the goal(s) that have been set?

First, make sure you all make it clear to your bandmate that you support them and want them to focus on getting better/being there for their family. Have an open conversation about how serious the situation is, how you can best support them during this time, and determine how long this member needs to step down from band responsibilities.

If it’s a temporary matter, consider hiring a stand in for shows and set up a shared document or folder online where members can keep their bandmate updated on goings on and post messages of support so that the individual can stay connected to the group on their own time (multiple emails and texts may be too stressful and ineffective at a time like this, while a shared document is less invasive and more easily digestible).

2. A member’s not pulling their weight

If you’ve got a bandmate who’s constantly late to practice, giving little-to-no energy onstage, and/or failing to do any promotion of the band’s music or upcoming shows, it’s time for some tough love.

First, confirm with the other members that this person is slacking and it’s not just you having unrealistic expectations of how committed everyone should be at this point in the band’s career.

Next, come up with a plan with the other members.

Decide as a band if this person seems to be going through a rough time where they need the support of their bandmates, or if the person needs a large attitude adjustment and/or wake up call about their behavior.

If it’s been decided that the person is going through a rough time, revert back to the advice above and consider suggesting to them to take some time off to get the support they need.

If you believe the person is outright blowing off responsibilities, sit down as a group and have a business meeting that addresses the responsibilities and expectations of each member. There’s no need to go after the guilty party personally. Having a meeting that outlines what’s acceptable and not acceptable will likely bring the message home.

Ultimately, it comes down to (1) having a plan in place for moving forward (how many chances does a member have to make something right and what are the expectations from here on out?) and (2) being a united front with the rest of your bandmates in order to present an agreeable response from them during the meeting.

Having clear guidelines in place such as, “If anyone misses a total of three rehearsals after today, they’re out” will make it less combative if/when it’s time to fire a member and replace them with someone else.

It’s also not a bad idea to have everyone sign an agreement that outlines these expectations and responsibilities. At the end of the day, if you want this to be your career, this is a business and if a member of the team isn’t doing their fair share, it’s time to go.

3. A member’s involved with a toxic significant other

There’s a reason the phrase, “The band’s been Yoko Ono’d” became a thing. All too often, a band member can get so caught up in a romantic relationship that their “BAE” becomes an unwanted additional member of the group. The S.O. can influence them in ways that the other bandmates never can.

Again, bands can often feel like extended family, so it’s no easy task to turn your back on a member who’s only crime is falling in love. But, when the person they’ve fallen for is destroying the dynamic and progress of the group, it’s time to step in and speak up.

Much like an intervention to address substance abuse, the member’s drug of choice is their toxic relationship and their toxicity is affecting others in the band.

Sit down as a group and allow each band member (including them) to air their grievances and identify what they feel is holding the group back. This can be a delicate situation, and it’s sometimes best to have an outside party mediate this situation to keep the member from feeling ganged up on and shutting down from hearing your feedback.

Rather than trying to break them up (ultimately that’s not your call or your business), focus on setting boundaries as a group when it comes to the behavior and involvement of any member’s significant other.

Remind them that this is a business and a work place, and their love life has no place in the group. Let them know what you all need from them moving forward and let them handle how to deal with it in their relationship. Avoid focusing on what they should and shouldn’t allow in their personal life.

Ultimately, being in a band is hard. It’s more than a business, but it’s also more than a family — it’s both. Showing support like a family member and drawing boundaries like a business can often be the balance you need to keep things moving in a positive direction.