How to Price Your Band Merch: A Simple 4-Step Guide 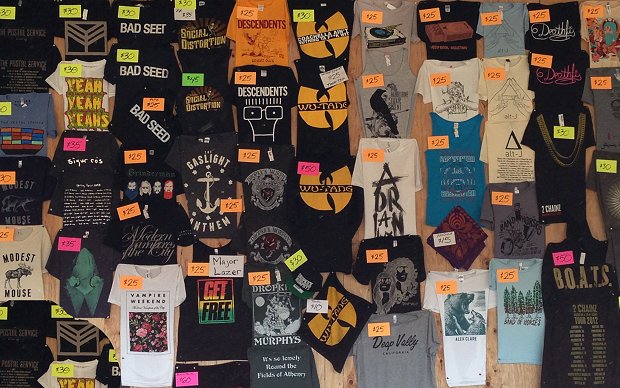 Do any of these prices seem inappropriate to you? (Image via merchindustries.com)

Setting prices for your T-shirts, vinyl, seven-inches, and even buttons is not unlike designating a price for any other retail good. You've got to consider not only the cost of the product, but also how much people might be willing to drop for it.

It's actually a little more complicated than that in the greater retail world, but we're not expecting you to learn all the ins and outs of that industry before setting up for your next show. We've simplified it here with a step-by-step checklist to help you choose prices that are reasonable – both for yourself and for your fans.

1. What did you spend on the item?

In a perfectly planned-out scenario, you'll have considered the cost of making the item before committing to an order. How much you can fairly mark up that item while still making a profit should play a role in whether you go with one company or another. If you've already purchased the items, just keep the aforementioned in mind for next time and figure out how much you paid for each individual item.

The standard retail markup is 100 percent, so a T-shirt that cost you $10 to make should be sold for $20. That doesn't always work in the band merch world, though. What if you paid $12, but the design is actually quite simple and the quality far from top-notch? Also worth thinking about: if you've got 200 T-shirts to sell, the difference between selling them for $12 or $15 is $600, and that's a significant gap in profits.

Don't price your items so inexpensively that your return is practically nothing, but don't overcharge, either. Go with your gut. What would you pay for the item? Weigh that truth against the reality of what you paid to have it made.

3. What's everyone else charging?

Once you've picked a price based on the cost and desired return, think about the market in general. How much are T-shirts going for at local shows? It's probably somewhere between $10 and $20, maybe a little more if it's long-sleeved. What about music? No matter the product, it's good to familiarize yourself with the current market. You don't want to charge significantly more – or less – for items buyers will consider of the same value. Be sure to adjust your prices to fit closely with what people are accustomed to paying for similar items.

4. Need to clear out the inventory?

There are certain instances where super-low pricing is acceptable. Say your band is trying to get rid of some three-year-old shirts to save up for a new batch. Maybe lower the tag a few bucks or offer a two-for-$20 deal. If you're pushing a new album, why not throw in the old one at half the cost of its original price? When the money spent is long gone, it's tempting to price things at a steep discount. A few bucks off is okay, but don't sell yourself short.

These tips are intended for in-person sales. Stayed tuned for tips on how to sell more merch in an online shop in the coming weeks! Until then, learn more about increasing your merch sales: