How to Record an Album in 5 Days 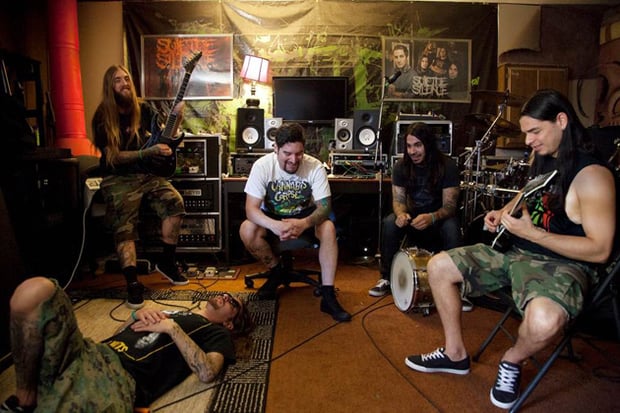 Suicide Silence in the studio. (Image via nuclearblast.com)

Recording a debut album is a milestone event in any band's career. You might have put out demo tapes or EPs before, but cutting a full-fledged, 40-minute record makes you feel like somebody. The Beatles had albums, Led Zeppelin had albums. Cutting a long-playing record brings you an inch closer to those legendary names.

Given the prestige that an album holds in the world of rock, you'd think that bands would enjoy making them. Yet, when I speak to young groups about the experience of recording their debut, the response I get is often negative. And what I've noticed is that the complaints are always the same: schedules went out of the window, nerves were frayed, and costs escalated above and beyond what the band had originally budgeted for.

I'm not going to lie to you, making records can be hard. There are a myriad of stresses involved, and the process of being in the studio can be arduous. Yet, I maintain that the kind of horror stories that hapless young bands have described to me need never happen. In fact, I strongly believe that a well-rehearsed band should be able to cut a debut record in five days or under. Wondering exactly how to do tha? Check out my four essential steps below.

1. Decide how you're going to record

I'm often perplexed by bands who book studio time without thinking about how they want to record their music. Whether through ignorance or unpreparedness, these groups end up spending time and money deciding on things that they should have known before they stepped through the door. It sounds obvious to say it, but before you start recording, you need to decide exactly how you're going to record.

There are two main ways to cut an album. You can record a band live in the studio (usually adding some overdubs or corrections afterwards), or you can layer individually tracked instruments. Both of these methods produce very different results and are suited to different kinds of bands. It's easy to ruin a great song by recording it the wrong way, so make sure that you think carefully about the approach that will work best for you.

If you're in doubt about this, then don't be afraid to sit down and talk to the producer or engineer that you're working with. Provided that they're worth the money you're paying them, they should have enough experience to help guide your band to the right method.

[A Musician’s Guide to the Artist/Producer Relationship]

2. Practice your parts in the conditions you'll record them

Once you've decided how you’re going to record your album, you need to make sure that you can perform your parts under the conditions that you'll be recording in. While this might seem like a no-brainer, the number of bands that forget this rule is greater than you'd think. If you're going for a live recording, then practice playing the songs live as a whole band until they sound really tight and your performances are consistent. If you're tracking instruments, practice your individual parts to a metronome set to the tempo of the song.

By practicing in the conditions in which you'll be recording, you won't be faced with any surprises by the time you get to the studio, and you should be able to play through the session without needing to excessively retake parts.

When you play live, you have a certain amount of leeway. Features like guitar solos, drum fills, and vocal melodies can be altered or improvised on a night-by-night basis. Live, this level of freedom is important – experimenting with these parts helps to refine a song. By the time you get to the studio, though, you need to have decided exactly how you want these parts to sound. If you don't, you can end up stalling the recording process in a big way.

You can get away with improvisation playing live. The audience rarely notices a sloppy solo when it's being blasted through a 1,000-watt P.A stack. On record though, listeners are afforded a far greater degree of scrutiny. Small mistakes or moments of bad playing become very noticeable when they can be listened to over and over again.

Before you go into the studio, make sure that you're completely familiar with every part that you are playing. You should be able to take that part, perform it repeatedly, and there should be little to no variation between each take. If you're unsure whether you've got a part nailed, then record yourself playing it five or six times in a row on your smartphone. If each take that you play sounds the same, then you're probably good to go.

4. Get your equipment serviced

You might be the tightest, most well-rehearsed band in the world, but if your gear is shot to shit, it's going to take you ages to record. In my experience, broken strings, faulty amps, ripped drum skins, and dodgy guitar intonation are the most common factors for delaying a recording session. Unless you've brought backups of all your gear, you'll have to fix these issues on the spot in the studio. Do that, and you're effectively paying an engineer to watch you repair your equipment. When you think about it, that's a horrendous waste of money.

Before you go into the studio, go over all of your gear top to bottom, and make sure that it's in good shape. Change batteries on pedals, strings on guitars, and skins on drums the day before you go into the studio. If the jack on your instrument has been buzzing for a few months and you've been ignoring it, now is the time to get it checked. Make a checklist of everything that you'll need and triple-check it. Take as many backups as you can. It's better to have these things and not need them then to need them and not have them.

Alec Plowman is a SplashFlood contributing writer. He is writing a PhD thesis on liveness in rock music at the University of East Anglia. He is also a freelance media journalist and the frontman of Norwich-based hard rock band Monster City. Follow him on Twitter @alec_plowman.