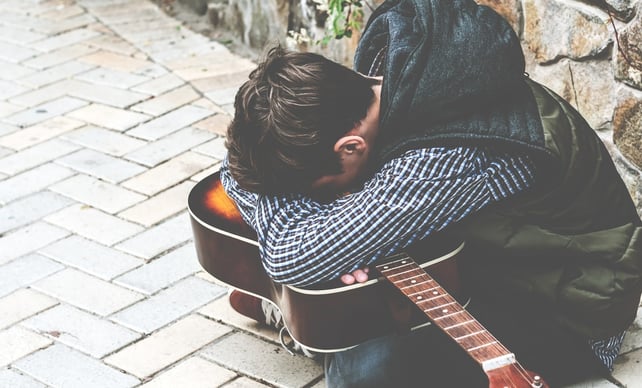 Musicians tend to fall into a few different camps when it comes to evaluating their own performances; some will be unsatisfied, no matter how well it went, while others will think that every show they play is the best show ever.

Then there are the rest of us who tend to waffle back and forth between these two extremes (often simultaneously) experiencing a sense of elation after every gig that’s quickly met with questions like, “What it it didn’t go as well as I thought it did?” or, “What if everyone was just pretending that they liked our set?”

Then again, sometimes you’ll have one of those gigs where it’s plainly obvious to everyone in the band that things simply did not go well. When this happens, the way you react is crucial to your long-term success. Here are a few thoughts to keep in mind if you’ve just bombed a set.

It’s easy to write off a bad gig by blaming things on other people – your band members, the sound engineer, the noisy group at the bar that wouldn’t shut up during your set – anything to take the blame off yourself.

While this might seem like the best way forward at the time, what this attitude really means is that you’re not willing to accept responsibility for what happened, and without accepting responsibility, there’s no way to avoid making the same mistakes in the future.

Studies have also shown that people who are willing to accept responsibility for problems they didn’t cause make better leaders than those who point the finger at others, which means that taking responsibility is especially important for band leaders.

2. Figure out what went wrong

While laying blame is unproductive, trying to pinpoint what went wrong with your gig can help you avoid more bad gigs in the future. The difference between laying blame and problem solving is the latter involves taking responsibility for what went wrong even if the issue seems like it was beyond your control.

As the performer, it can often be challenging to pinpoint what exactly went wrong at a gig, since you had a different perspective on the performance than everyone else. For this reason, it can be helpful to ask some trusted friends or even someone like your touring manager or the concert promoter for their opinions on the night.

3. Change what you can

If the gig went poorly because you and your band were simply off your game, this can be fixed through practice and more performance experience. On the other hand, if things went off the rails because of factors beyond your control, then it’s important to take some time to identify what you can change in the future to avoid running into the same issues again.

For example, if you had a bad gig because the sound guy wasn’t giving you a good mix in your monitors, then you can work on getting better at dealing with live sound engineers at your gigs to get the results you want.

The same goes for issues with audience members. Audiences can be fickle, and good performers should be able to deal with all types of audiences, whether they’re rowdy, attentive, or distant.

4. Identify what you can't change

At the same time, there will sometimes be problems that you simply can’t do anything about. You can get better at dealing with unexpected issues like technical difficulties or rowdy audience members at your shows, but sometimes you’ll have one of those nights when everything just seems to go wrong for no reason at all.

In these cases, the problem-solving approach may not work so well. So rather than dwelling on things in the past that you can’t control, channel your energy into something you can control, like preparing for your next gig or writing a sad/angry song about how crappy your night was.

5. Chalk it up to experience

As naive as it may sound, sometimes the best way to deal with a bad experience is to put a positive spin on it. Friedrich Nietzsche said, “That which does not kill us, makes us stronger,” and researchers have proven him right. So maybe it’s just like your cheezy uncle always said – maybe every bad experience really is just an opportunity to build character.

It’s also important to realize that everyone, no matter who they are, has an off night once in awhile, and you’re no exception. We’ve all had bad gigs, and we’ll probably have more in the future.

So no matter how much it sucks, you’ll get over that gross feeling you experience after bombing a set (even if it feels impossible to get over in the moment), and in the end, you’ll be better off for it.